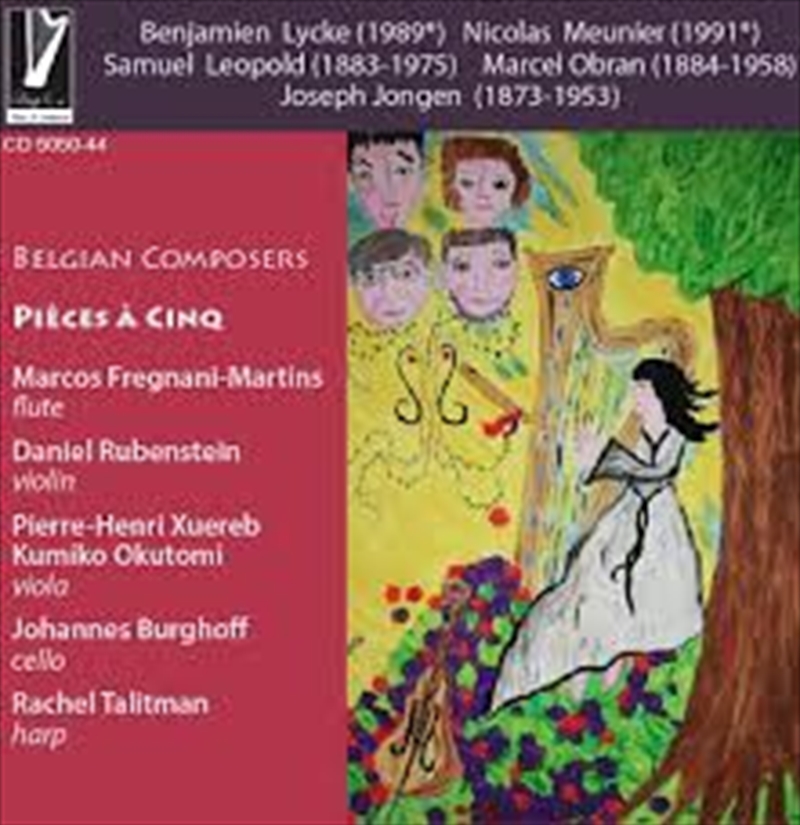 Nicolas Meunier is a Belgian composer, born in Mons, in 1991. His style represents his eclectic path, always looking for balance between his achievements, influences, and experi-ments. "Pièce à Cinq is a composition specifically composed for Rachel Talitman. The ensemble harp, flute, violin, viola, and cello immediately appealed to me, through the diversity of nuances of this instrument's combination. The title refers to the composition of Joseph Jongen, Concert à Cinq op. 71, composed for the same chamber music combination."

Leopold Samuel (1883-1975) comes from a famous family of artists. In 1911 he received the "Prix de Rome" for his cantate Tycho-Braché and continued to compose throughout his life, writing sym¬phonies, concertos, instrumental music, vocal and a great deal of chamber music. His style follows the franckism, with chromatic harmonies. The Concert à Cinq has a more impressionistic colour, although always in a tonal language, sober, elegant and still romantic.

Marcel Obran (1884-1958) studied at the Schola Cantorum in Paris, with Vincent d'Indy and Albert Roussel. He composed mainly chamber music including the three dances on this album: Fantasque, Gracieuse, Rustique, which are pleasant, dynamic and rhythmic. The different themes are connected and maintain an excellent balance between the instruments.

Joseph Jongen (1873 1953) was born in Liège. In 1897, he won the Belgian Prix de Rome, which allowed him to travel to Italy, Germany and France. His first String Quartet (1894) was awarded the top prize by the jury of the Royal Academy of Belgium. In 1902, he was appointed professor of harmony and counterpoint at the Liège Royal Conservatory. With the outbreak of World War I, he and his family moved to England, where he founded a piano quartet. He came back to Belgium after the war and was named professor of fugue at the Brussels Royal Conservatory. From 1925 until 1939, he served as director of that institution, after which his brother Léon Jongen took the position. Fourteen years after leaving the directorship, Joseph Jongen died at Sart-lez-Spa, Belgium. Jongen composed symphonies, concertos, chamber Music, solo instrumental works, choral and messes. The Ballade Sur Un Vieux Wallon Oublié op.125 was composed for chromatic harp in 1943, and is romantic and nostalgic, colourful with impressionistic influences, descri¬bing the atmosphere of Wallonia in Christmas time.

Benjamien Lycke b. 1989, studied composition at the Royal Conservatory of Ghent (Bachelor & Master) and the Royal College of Music London (Post-Graduate). He wrote and produced as graduation piece in Gent the opera ACUBENS which was broadcast entirely on the Belgian National Television (VRT) and was his first step with his collective SYNART to accomplish all kind of projects: He wrote with librettist/director Mien Bogaert several chamber operas with performances in London (PUCK, SOCSOB), Hamburg (CYCLOPS) and Bruges (MONU). Besides soundtracks for movies (Memento Mori), games and advertisements (ex. Chanel), he com¬poses contemporary concert music for small (Kugoni Trio, Triotique) and big ensembles (Symfonie Orkest Vlaanderen). Choir, opera (Flandria, LOD) and experimental, multidisciplinary projects are his favourites. Benjamien Lycke writes: "The main theme for this composition is a short melody I invented years ago before I had any musical education. I never used it for anything until now. Writing for Rachel was the perfect opportunity to actually get it out of my head and to put it to paper, and finally use it for a full com¬position. I tried to keep some of my initial naive minimalistic composition style and mix it with composing technics I mastered during my early studies."