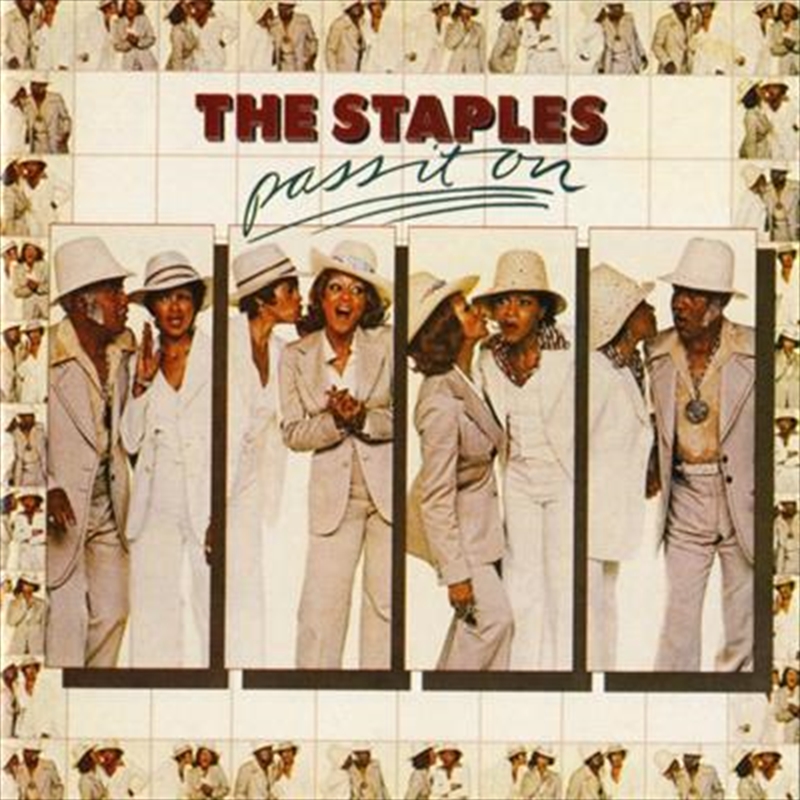 The Staples Pass It On CD

The Staple Singers are an American musical treasure. In the ’50s they were among the greatest of the post-war gospel groups. The ’60s found them recording for a variety of labels like Vee-Jay, Riverside, Epic, and ultimately Stax, pioneering the “soul folk” sound.

By the end of the decade, they were becoming the soul music superstars they’re most widely known as now. During the ’70s, they placed 13 singles on the U.S. Pop Chart and 20 on the U.S. R&B Chart. Besides recording, touring and chasing songs up the charts, the group also found time to not only appear in music-related motion pictures like Wattstax (1972) and The Bands’ The Last Waltz (1976), but they also contributed to the Sidney Poitier-directed film soundtrack, Let’s Do It Again with music produced by Curtis Mayfield.

This, their first post-Stax effort, sent the title track, “Let’s Do It Again,” to the number one spot on both the Pop and R&B charts. Though the hits slowed after the mid-’70s, they did have a number 5 dance chart hit with a cover of the Talking Heads song, “Slippery People” in 1984. Mavis Staples had been releasing solo albums dating back to 1969’s self-titled effort on Stax, but started to pick up the release tempo and carry for family business forward with a pair of albums for the Paisley Park label under the direction of Prince in 1989 and 1993. She continues performing and releasing albums to this day, working with artists and producers like Ry Cooder, Jeff Tweedy, Arcade Fire, Gorillaz, and Ben Harper, among others.

Omnivore is proud to present the remastered 1976 Curtis Mayfield-produced Pass It On. The new edition feature liner notes from Grammy®-Award winning author, Rob Bowman and all single edits as bonus tracks.

This reissue is produced and remastered by Grammy®-winners, Cheryl Pawelski and Michael Graves respectively, and includes photos and ephemera in the booklet.

Title: Pass It On

1. The Real Thing Inside Of Me/Party

2. Take Your Own Time

3. Sweeter Than The Sweet

7. This Love Of Mine

9. Sweeter Than The Sweet (Single Edit)