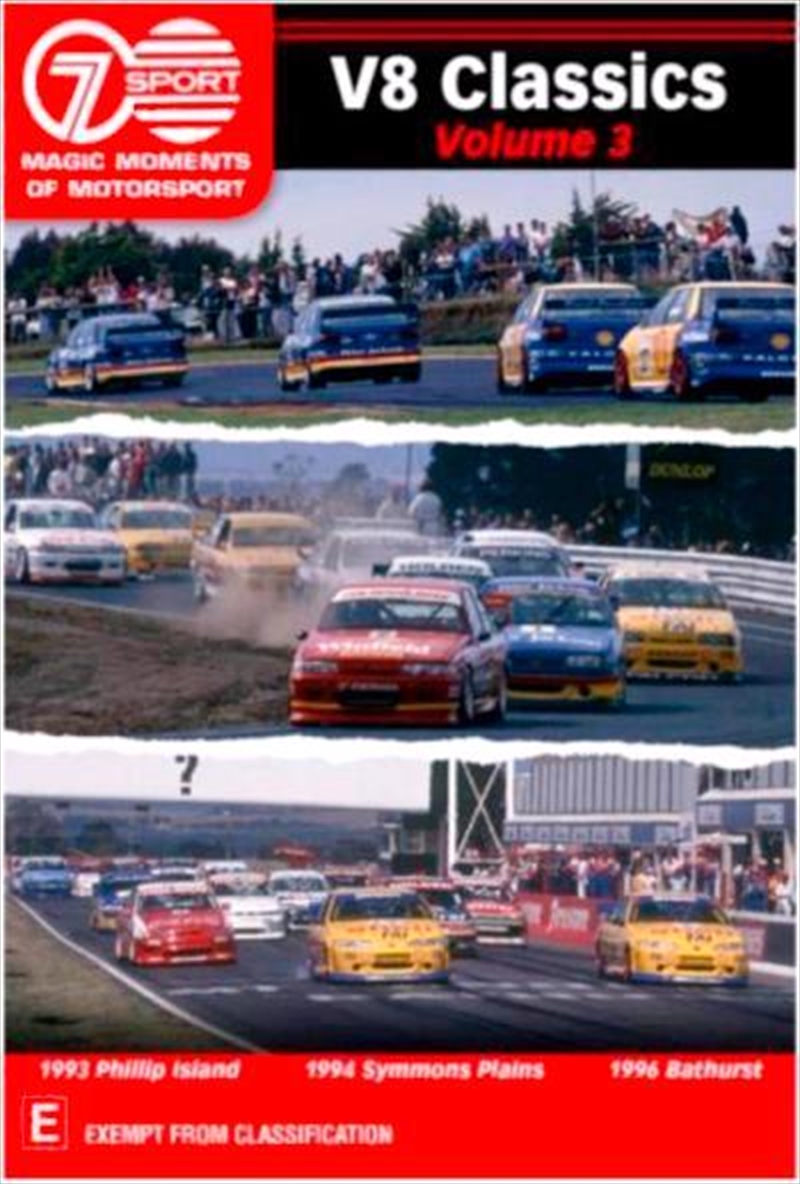 DESCRIPTION
The third volume covering the popular V8 touring car era of the mid 1990s, this special Seven Sports Magic Moments of Motorsport Series release features three tightly contested rounds of the Shell Australian Touring Car Championship. First up we rewind back to April 1993 and round three of the championship at the sweeping Phillip Island Grand Prix Circuit in Victoria. The debut year of the revived Commodore and Falcon V8 touring car formula was a huge hit and the early stages of the season proved to be a good one for Ford fans.Peter Jackson duo Glenn Seton and Alan Jones and Shell pair Dick Johnson and John Bowe had the measure of the Holden pilots in this V8 classic while the 2.5-litre BMW M3s snapped at the heels of the Commodores and Falcons in a bid to keep up with the winged warriors. Then we fast forward to March 1994 and the second round of that years championship at Symmons Plains in Tasmania as eventual champ Mark Skaife blitzed the weekend to help set up a solid early season points lead. But behind him the action is intense between Seton, Peter Brock (in his first season with the Holden Racing Team), BMW convert Tony Longhurst, Larry Perkins, John Bowe and many more. And finally we round out with the last time Bathurst hosted a sprint round of the ATCC. The third round of the 1996 season on February 25 of that year and was contested at the famous Mount Panorama circuit. It proved to be a great weekend for Ford duo John Bowe and Dick Johnson as they swept to a 1-2 round result across the three sprint races. Things weren't so rosy for points leader Craig Lowndes though, the Holden young gun coming unstuck in a clash with 1987 500cc Motorcycle World Champion Wayne Gardner and his Coke Commodore. These three rounds come from a period where top-line professional teams raced against a brace of privateer drivers. They marked a time too where the sport was about to transform into V8 Supercars and, eventually, the Supercars Championship we enjoy today.
DETAILS