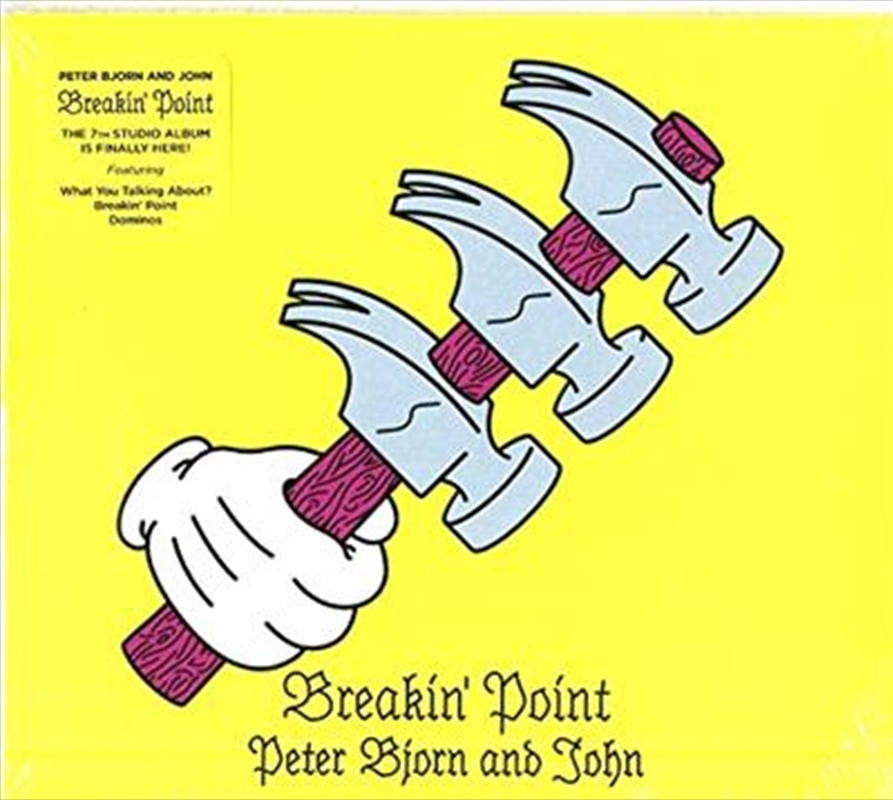 Shipping - See delivery options.
Postcode:
Quantity:
SEE MORE IN:
2 for $40 Music All 2 for $40
DESCRIPTION
Peter Bjorn and John have announced the release of their seventh album ‘Breakin’ Point’, their first in five years, on June 10, 2016 through INGRID via Kobalt Label Services.

During a fruitful period of disappearance in the last five years, the trio have built their own studio, started a record label, and toiled to perfect a formula for effortless sounding pop music. The gang of childhood friends famously broke the mould an entire decade ago with one of the catchiest songs to feature whistling ever – 'Young Folks'. But as bassist and production whizz Bjorn says, 'Young Folks' was not a curse upon a career that is on the verge of entering its seventh era with forthcoming album 'Breakin’ Point'.

The trio's previous record 'Gimme Some' was Peter Bjorn and John's “power pop, guitar statement”, focused on recreating in the studio what they were confidently doing live. This time they wanted to do the total opposite. “This was about doing big pop songs,” says Bjorn, who recalls sitting around listening to ABBA with his bandmates, marvelling at how they made it sound and look so easy.

Opening track and album highlight 'Dominos' is a piano disco anthem about working for the Man. The track 'Hard Sleep' and title track 'Breakin' Point' are about abandoning life's small trivialities and embracing newfound fatherhood. On 'A Long Goodbye' the guitar riff is reminiscent of Blondie classic 'Heart Of Glass'. “Yes I can hear that,” agrees Bjorn. “But we haven't sampled it so you can forgive us for that.”

Peter Bjorn And John are a meld of three disparate and unique elements. Together, they're both classic and delicious.
DETAILS

Love Is What You Want

What You Talking About?