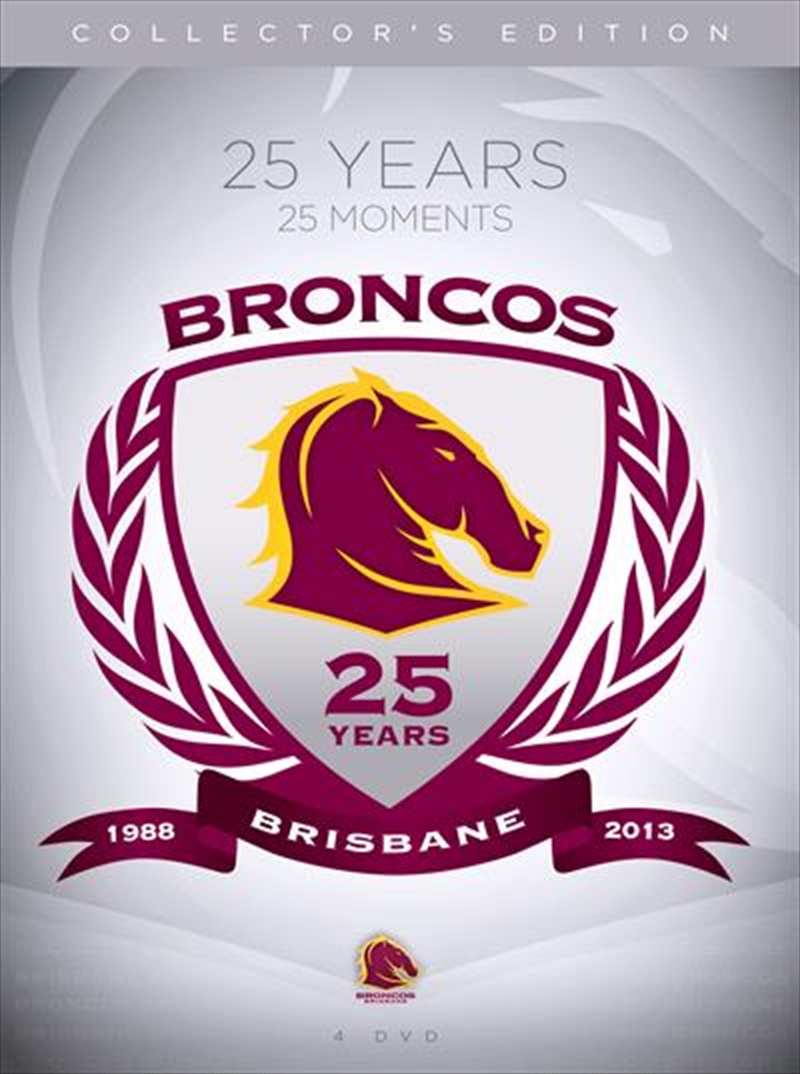 SEE MORE IN:
Everything NRL
DESCRIPTION

BRISBANE BRONCOS 25 YEARS 1988-2013 - Since their entry into the competition in 1988, the Brisbane Broncos have cemented their position as one of Rugby Leagues most popular and successful clubs. Some of the greatest players of the modern era have worn the renowned maroon-and-gold jumper: Wally Lewis, Allan Langer, Steve Renouf, the Walters twins, Wendell Sailor, Gorden Tallis, Shane Webcke, Petero Civoniceva, Darren Lockyer just to name a few. A club with a flair for the dramatic and a hunger for success, the Broncos have won no less than six Premierships since their foundation the most for any club in the last three decades. Celebrate the 25th Anniversary of the Brisbane Broncos with this historic collection of 25 incredible moments that underline the pride and passion of this famous club.Who could forget the Broncos first ever game at Lang Park in Round 1 of 1988, a crushing victory over Manly-Warringah, the reigning Premiers? Or Steve Renoufs remarkable four tries against North Sydney in 1991, and his incredible club-record 23-try haul in the 1994 season? Relive the Broncos dominance of the 1990s, which led to back-to-back Premierships in 1992 and 1993, and again in 1997 and 1998. Experience the emotional return to the Broncos spiritual home of Suncorp Stadium in 2003, and the nail-biting 2006 Grand Final win over the heavily-backed Melbourne Storm. Be inspired by Shane Webckes stirring performance in the 2000 Grand Final, when the big prop took on the Roosters pack with a broken arm. Witness Darren Lockyers coming of age from fullback to five-eighth to skipper, through to his last performance in a Broncos jersey, playing through the pain to sink a winning field goal against the Dragons in the 2011 Semi Final. These and other amazing memories from the past 25 years combine to create the fabled history of the mighty Brisbane Broncos.This special collectors edition also contains full match replays of the Brisbane Broncos 6 Grand Final victories:-1992 1993 1997 1998 2000 2006