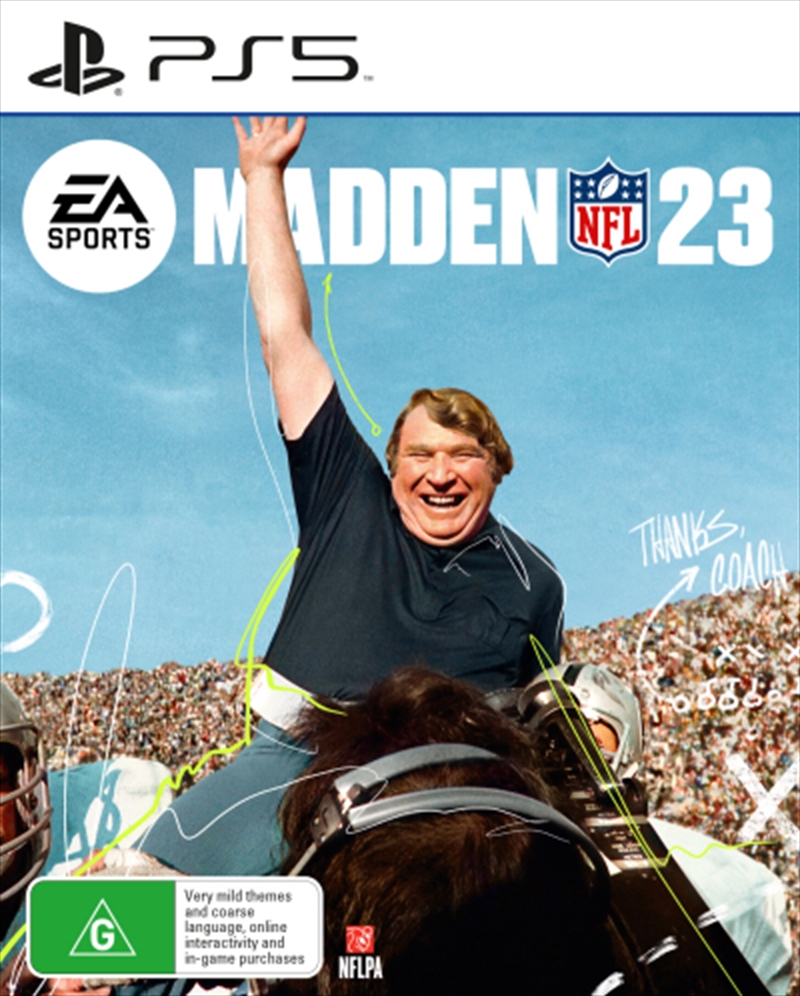 EA SPORTS Madden NFL 23 on PlayStation 5 introduces the all-new FieldSENSE Gameplay System which provides the foundation for consistent, ultra-realistic gameplay, and equips players with more control at all positions in every mode.

FieldSENSE leverages animation branching technology and a suite of new user control mechanics for a seamless gameplay flow with authentic results on every play. Play your way into the history books in Face of the Franchise: The League where new position-specific mechanics are brought to life by FieldSENSE and player-focused cameras bring you closer to the action and add to gameplay depth by allowing you to dominate every snap, from anywhere on the field. Call the shots from the front office with updates to Franchise, and experience simplified team-building and convenient competition as you assemble the most powerful roster in all of Madden Ultimate Team.

Only on PlayStation 5 and Xbox Series X/S in Madden NFL 23, an all-new suite of user-friendly gameplay control mechanics lets you affect every play no matter where you are on the field in ways never before possible.

360-degree Cuts:
Break off more big plays: Whether you're a running back, wide receiver after the catch, or returning a kick, new 360-degree Cuts give you the freedom and fluidity as the ball-carrier to hit the gaps you want to, plant-and-go, and elude defenders using Left Trigger/L2 and a well-timed flick of your stick.

Skill-Based Passing:
Drop dimes all over the field: Lead your receivers open, drop back-shoulder throws into tight windows, and place every pass where only your receiver can catch it with surgical accuracy thanks to this all-new way to pass. Skill-based passing introduces a new accuracy reticle and passing meter.

WR vs DB Battles:
Win the battle off the line: A suite of new wide receiver release moves and defensive back counter press mechanics make for some fancy footwork and crucial 1v1 battles off the line.

Franchise:
Call the shots from the front office: Plan and strategize like an NFL head coach with refined scouting, staff management, and weekly strategy features to take your Franchise to the top. New athlete motivations like team location and salary demands factor into contract negotiations and add to the drama of NFL free agency within Franchise. Updated Trade Logic AI represents the value of star players more accurately for fair and more realistic offers.

Face of the Franchise: The League:
Play your way into the history books: The League drops you into your fifth NFL season at a skill position of your choice (QB, WR, RB, CB, MLB) and you're seeking a fresh start with a new team. Negotiate a one-year "prove-it" contract with one of 32 NFL teams and show out with great on-field performance to earn rewards and level up. New position-specific mechanics brought to life by FieldSENSE and player-focused cameras bring you closer to the action and add to gameplay depth by allowing you to dominate every snap, from anywhere on the field. The addition of New Drive Goals and Drive Summaries allow you to tweak your experience throughout a game and get feedback and rewards based on how well you play. Get performance boosts from weekly activities and training between games while Madden Ratings Adjustor Chad Johnson guides your career development by providing ratings updates as you strive for the highest level of prestige on your Road to 99. Will your NFL career rank among the all-time greats? It's up to you.

Madden Ultimate Team:
Simplified team-building, convenient competition: Develop your dream fantasy roster of current NFL superstars, Hall of Fame legends, and more. Always have something to play for with the first-ever Field Pass challenge and reward tracker in Madden Ultimate Team. Play to earn MUT Champions entry tokens and choose to compete at your convenience. Simplified Set building lets you navigate your content binder more effectively so you can focus on improving your Ultimate Team roster all season.

The Yard:
Become the world's greatest in this tricked-out, backyard-inspired 6v6 gameplay set in fantastical locations around the globe. Do it in style with the hottest gear in the game. Fully integrated into Face of the Franchise, access more opportunities for Avatar progression by playing in The Yard.

Superstar KO:
Squad up and feel like an NFL superstar in Madden NFL 23's fast co-op eliminator mode where Superstar X-Factor abilities are always on. Play short games in unique stadiums with dynamic rules and icons of football culture.

Play With Friends:
Play with the squad and show off in multiplayer modes like the tricked-out 6v6 The Yard ranked, feel like an NFL superstar with always-on Superstar X-Factor abilities in Superstar KO, or test your skills in online head-to-head.

Play Now:
Compete in head-to-head online and offline games (single and multiplayer) or single player offline against the CPU. Play your way with settings including quarter length, rules, stadiums, and uniforms.