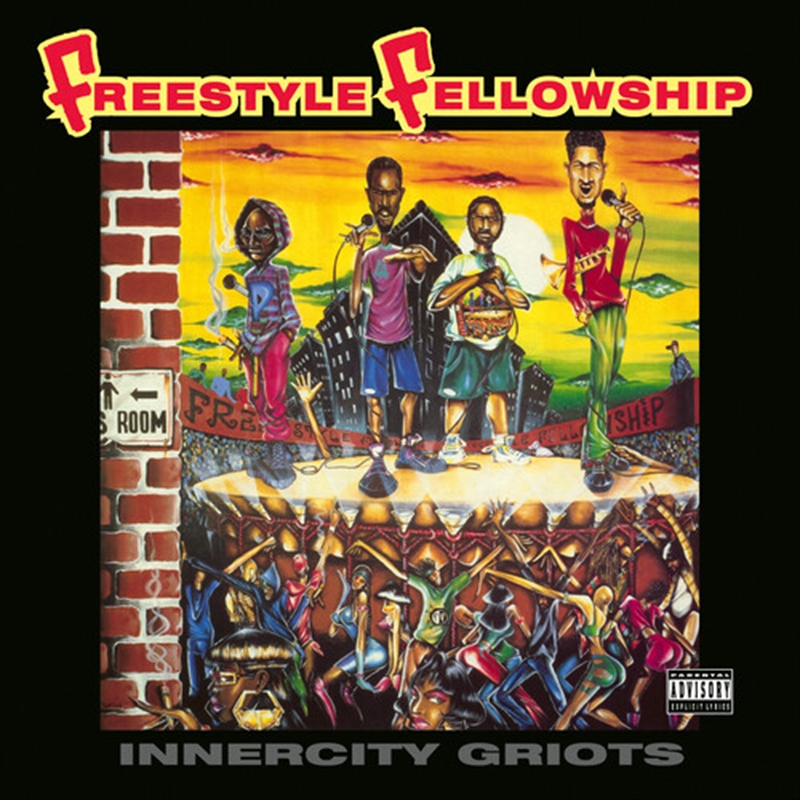 Innercity Griots, the second album from Freestyle Fellowship, is perhaps *the* essential West Coast left-field rap album of the early '90s. Released in 1993 on 4th & Broadway, it's a towering, progressive hip-hop masterpiece that expanded rap's boundaries through lyrical elevation and production innovation. Their talent was ahead of everybody else by light years. This is pure b-boy jazz. The original single vinyl LP is now hideously scarce, and of course the sound suffers from not being officially released as a double. This Be With re-issue fixes both problems, and for completeness also includes "Pure Thought" from the CD version of the album. This incredible display of imaginative hip-hop sounds better than ever. Freestyle Fellowship were some of the earliest technically dazzling rappers to come out of California. Mikah 9, P.E.A.C.E., Aceyalone and Self Jupiter - along with DJ Kiilu - forged their famed lyrical dexterity in the ultra-competitive crucible of the Good Life Cafe. Founded in Leimert Park, South Central LA in December 1989, this earthy health-food store and cafe was where the city's finest microphone fiends would gather to showcase their freestyle skills at the Thursday night open-mic. Forcing MCs to raise the bar and stay fresh every week (a challenge made even tougher by the strict "no cussing" policy) the Good Life became an incubator for groups like the Pharcyde and Jurassic 5 and their events attracted big-names like Ice Cube, Snoop Dogg, Ice-T, Pharrell, and John Singleton. To Self Jupiter, the Good Life was "college - you had to come with something peculiar, left-field each week". It served as a predecessor to the Project Blowed scene, and inspired influential club nights like Low End Theory. The Fellowship's "chopping" double-time raps were an evolutionary step for lyricism. A style that sounds freestyled: abstract hip hop before it existed. "We do double-time passages and runs and riffs" Mykah 9 told the LA Times in a 1993 article, "we improvise and play off of each other's words and sounds-like jazz musicians do. What we are is liberators, liberating rap from it's R&B/funk structures - that 4/4 [time] prison". All 4 members were very different but they all had a unique jazz-scat style that was fresh. Their flamboyant chopping technique seemed like they were trying to rap at the speed of thought and it influenced everyone from Snoop to Ras Kass to Xzibit to Kendrick Lamar.

2 Bullies of the Block