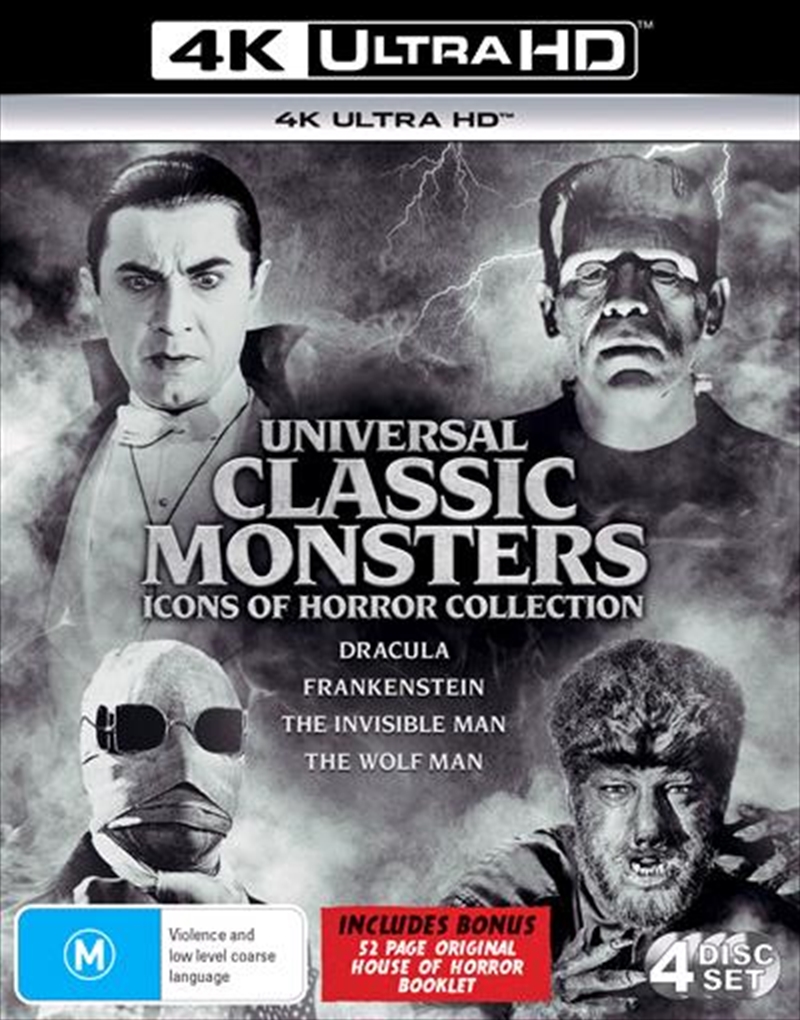 Shipping - See delivery options.
Postcode:
Quantity:
SEE MORE IN:
4K UHD Bingeworthy Boxsets
DESCRIPTION
Dracula - There are far worse things awaiting man than death. This horror classic stands as the most famous and celebrated film version of the popular vampire story. Bela Lugosi delivers a star-making performance as the titular villain-his erudite, refined Dracula is at once alluring and terrifying, while director Tod Browning creates an effectively haunted and chilled atmosphere. Dracula is an immeasurably important and influential film for its genre, and an invaluable touchstone in Universal's impressive and definitive horror film canon.
Frankenstein - Boris Karloff stars as the screen's most memorable monster in what many consider to be the greatest horror film ever made. Dr. Frankenstein (Colin Clive) dares to tamper with life and death by creating a human monster (Boris Karloff) out of lifeless body parts. It's director James Whale's adaptation of the Mary Shelley novel blended with Karloff's compassionate portrayal of a creature groping for identity that makes Frankenstein a masterpiece not only of the genre, but for all time.
The Wolf Man - The original horror classic that introduced one of the screens most infamous monsters! Lon Chaney Jr. portrays Larry Talbot, who returns to his fathers (Claude Rains) castle in Wales and meets a beautiful woman (Evelyn Ankers). One fateful night, Talbot escorts her to a local carnival where Jenny's fate is revealed by a mysterious gypsy fortune teller. Today, over 65 years after it was first released, the dreamlike atmospheres and elaborate settings combined with a chilling musical score make The Wolf Man a masterpiece not only of the genre, but for all time!
The invisible Man_ Claude Rains delivers an unforgettable performance in his screen debut as a mysterious doctor who discovers a serum that makes him invisible. Covered by bandages and dark glasses, Rains arrives in a small English village and attempts to hide his amazing discovery, but the drug's side effects slowly drive him to commit acts of unspeakable terror. Based on H.G. Wells' classic novel and directed by the master of macabre, James Whale, The Invisible Man fuelled a host of sequels and features revolutionary special effects that can now be admired in stunning high definition.
DETAILS