Don't Get Got - Shut Up & Sit Down Special Edition 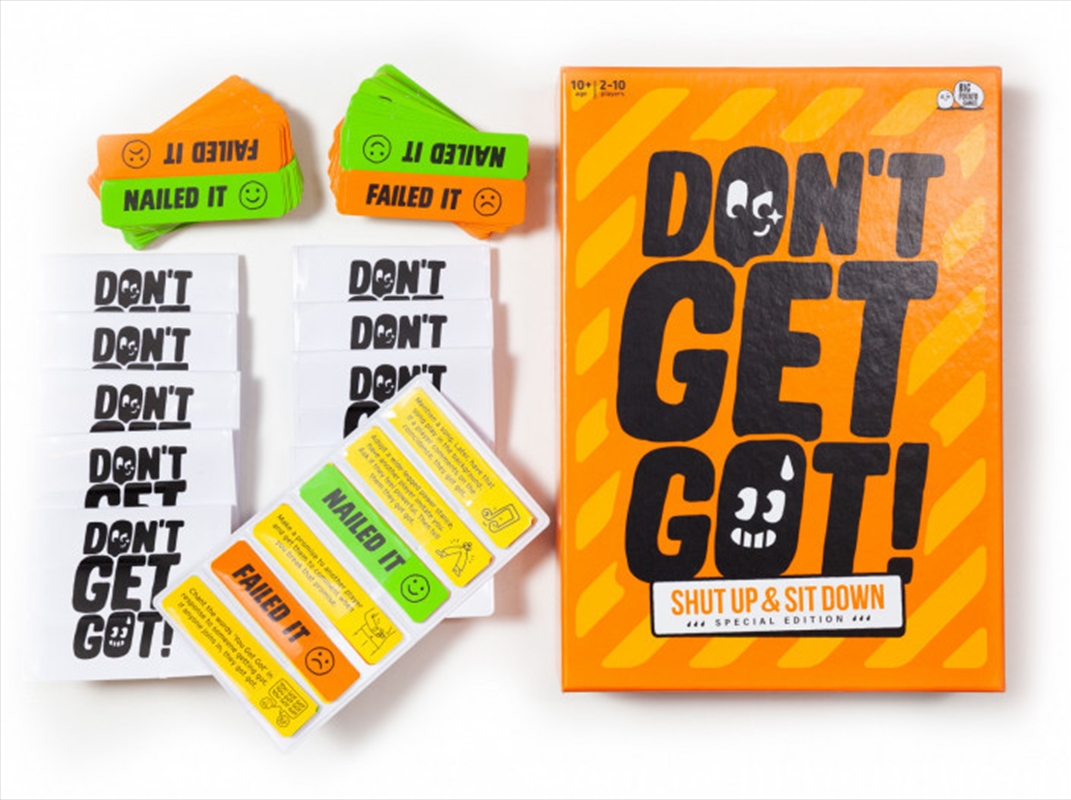 Shut Up & Sit Down, the best board game site on the entire internet, has teamed up with the party game professionals at Big Potato Games. Together, we’ve created a brand-new edition of Don’t Get Got with 120 new missions and an aggressively orange colour scheme.

If you don’t own Don’t Get Got, that’s perfect. Included in this box is everything you need to play.

If you DO own Don’t Get Got, that’s perfect too! Think of this box as a very generous expansion, doubling the amount of missions in the base game and letting you play with up to 20 players. Imagine that! It would be carnage.

Are you the kind of hotshot who doesn’t have 10 minutes to watch a video? Not a problem, here’s a quick gif-stuffed overview:

Don’t Get Got is a game of secret missions for 2-10 players, and it takes place while you go about your day. Perfect places to break out Don’t Get Got would be living with housemates, at work, on holiday, at parties, even at gaming conventions.

Each player receives a cute little wallet full of unique missions, and then you just get back to living your life, except you’re immediately going to start scheming like a mean scheme machine!
Each mission will tell you what you’ve got to try and trick the other players into doing...
Each time you succeed at this you get to (a) flip over the little mission in your wallet, which is super satisfying and (b) reveal your mission to the player who just got got, which is even more satisfying
But there’s a catch! If you ever get caught (which is as easy as another player asking if you’re trying to trick them), that mission is flipped over to the “FAILED IT” side for the rest of the game.
The first player to complete 3 missions wins!
The writers at Shut Up & Sit Down have had a great time creating new expansions for some of their favourite party games, like Monikers and The Metagame. When Big Potato asked if we wanted to design a brand-new box for Don’t Get Got, we leapt at the chance.

Included in this Shut Up & Sit Down Special Edition are 10 plastic wallets, 1 collectible sticker and 120 missions, all of which were painstakingly entered into a spreadsheet by team SU&SD.

In all seriousness, we worked super hard on this, and went through several rounds of refinement and feedback with the original game’s designers. The perfect Don’t Get Got mission makes you smile when you receive it, and represents an interesting, open-ended puzzle as to how exactly you’re going to pull it off. We aimed to deliver that with each and every mission.

Title: Don't Get Got - Shut Up & Sit Down Special Edition

Type: Card Game: Dont Get Got