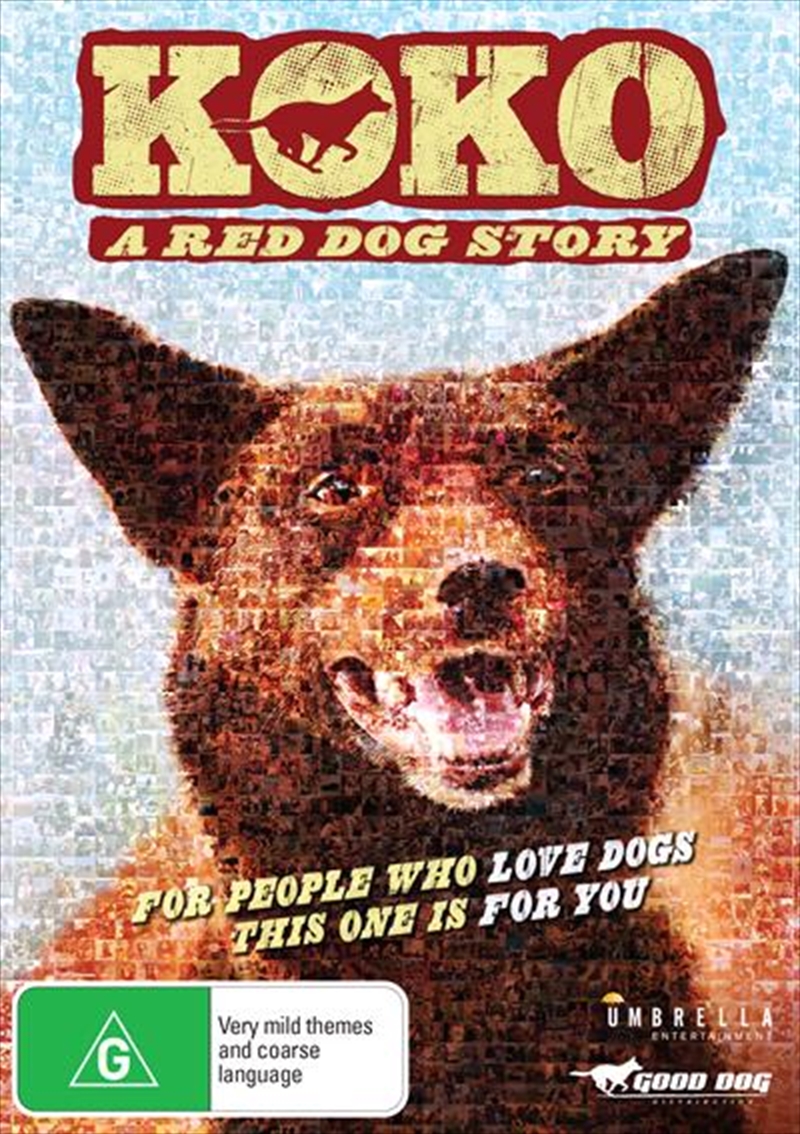 An ordinary dog, whose good fortune and ability to connect with people, catapults him to fame.

Review of Koko: A Red Dog Story by Peter Walkden

Koko: A Red Dog Story is a combination of a biography and a comedy about the real-life dog named Koko who was born in Australia. The film includes several interviews from cast and crew along with Koko's owner sharing her experiences with the famous dog and his discovery in cinema. If you are not aware, Koko is the actor dog whose performance changed Australian cinema when he featured as the leading actor in the movie Red Dog, which was released in 2011.
Koko is born, and little did he know he was destined for great things in life; great things that would capture the hearts of many but later the whole world. Koko's owner, named Carol, began to train Koko you. Carol decided to put Koko into competitions against other dogs. During these competitions, Koko walked away with many trophies. The movie here also talks about real Red Dog, how the true story got turned into a book and how the development of this book caught the eye of an Australian director named Kriv Stenders.
Being a significant movie lover myself, this film is quite fascinating. On one side, we learn the story of Koko's life, and on the other side, we gain a broader understanding of how the film Red Dog (2011) was made.
Overall, this movie combines being a heartfelt comedy along with being an excellent biography about a dog named Koko, who was not so ordinary. Koko was not only a dog who managed to star in a significant Australian blockbuster titled Red Dog in 2011, but he changed the lives of many and touched hearts across the world. This film exceptionally well made and it introduces a filming style, unlike anything I have seen previously. This is also a family-friendly film with incredible performances. By the third act, I'll confess I had water in my eyes not because this movie is depressing, but because I found this film to be so touching

Review of Koko: A Red Dog Story by Christopher Pattison

‘Red Dog’ has become one of Australia’s most iconic film franchises. After the debut of the loveable dog in 2011, Australian moviegoers have fallen in love with his story and now in 2020 we are treated yet again with another entry in the beloved franchise. ‘Koko: A Red Dog Story’ follows an ordinary dog, Koko, whose good fortune and ability to connect with people, catapults him to fame. This was a film I was quite excited to see, for one, I am a huge fan of the ‘Red Dog’ franchise and two, Jason Isaacs is also the narrator in the film, who I am a big fan of as well, so naturally everything was aligning for me to really enjoy this film. So how was ‘Koko: A Red Dog Story’. ‘Koko: A Red Dog Story’ was an absolute blast. The film has a sweet sentiment to it that cannot be found in other films in the genre. Whilst it does tread on the toes of other films in the franchise, ‘Koko’ still manages to tell a compelling albeit slightly sappy story, that can really be enjoyed by all. Jason Isaacs voice perfectly fits the role of the narrator as well in this film. Isaacs has made a name for himself lending his voice to many animated products including ‘Scoob’ this year. Felix Williams and Sarah Woods are also great in the film as well, they add to the story without taking away from the films star, Koko. ‘Koko: A Red Dog Story’ was a delight to watch. Filled with compelling drama, interesting characters, and a gorgeous dog, this is definitely a crowd-pleaser. I am giving ‘Koko: A Red Dog Story’ a 7.5/10. Pick up your copy today on DVD from your local Sanity or Online! Chris has written this movie review for Sanity. See more from Chris here