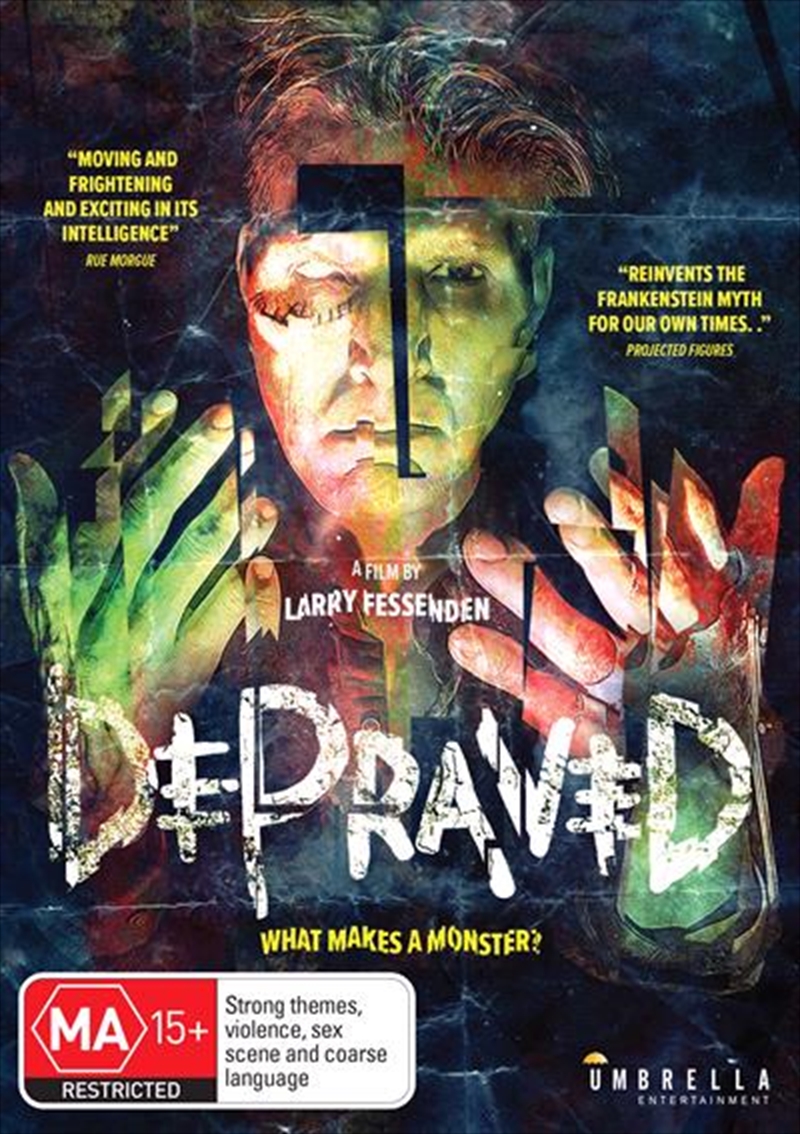 Alex (Owen Campbell) leaves his girlfriend Lucy (Chlo Levine) after an emotional night, walking the streets alone to get home. From out of nowhere, he is stabbed in a frenzied attack, the life draining out of him. He awakes to find he is the brain in a body he does not recognize. This creature, Adam (Alex Breaux), has been brought into consciousness by Henry (David Call), a brilliant field surgeon suffering from PTSD after two tours in the Mideast, and his accomplice Polidori (Joshua Leonard), a predator determined to cash in on the experiment that brought Adam to life. Henry is increasingly consumed with remorse over what hes done. Only Liz (Ana Kayne), Henrys estranged girlfriend, reaches out to consider the creatures loneliness. But that cant save him: when Adam finally discovers a video documenting his own origin, he goes on a rampage that reverberates through the group and tragedy befalls them all

Review of Depraved by Christopher Pattison

Over the years we have received many iterations of Mary Shelley’s classic creation ‘Frankenstein’ and his monster. From the 1930’s Universal Monster classic all the way to 2015’s ‘Victor Frankenstein’. But we have not received a scary iteration of the material for quite some time. Enter 2019’s ‘Depraved’… ‘Depraved’, follows a disillusioned field surgeon suffering from PTSD who makes a man out of body parts in Brooklyn. With a modern take on the Frankenstein legend, I was excited to see how writer, and director Larry Fessenden could do with this premise. So how was ‘Depraved’?
‘Depraved’ was dark, eerie and effective. This film is not for the faint of heart, with the gore being quite confronting. The film has a lot of fun still with the premise, essentially Henry (played by David Call), is our new Victor Frankenstein. Possessing a different motive than Victor and not a victim of his own hubris. Henry, rather suffers PTSD haunted by what he has seen in war. This character trope has been explored many times before, but rarely in a horror film. This adds a lot of depth to Henry’s character straight of the bat which separates the film from other iterations of the classic story. The film uses practical effects as well for the most part which are really creative and well realised. As a low-budget film, I marvel at what the team were able to create here as the effects really do stand out. The films story whilst simple is effective as well, with the gore and the central characters allowing you to really connect with the story and what is going on.
‘Depraved’ is a well-realised and well-crafted iteration of the classic ‘Frankenstein’ story. The film is populated with interesting characters, great performances, and unique and impressive practical effects. Like I said, the film is not for the faint-hearted but for fans of the horror genre, this one is definitely for you. I am giving ‘Depraved’ a 7.5/10. Pick up your copy today from Sanity in-store or Online!
Chris has written this movie review for Sanity. See more from Chris here

Review of Depraved by Peter Walkden

Adam (Alex Breaux) has recently moved in with his girlfriend Liz (Ana Kayne). One night the two have a serious discussion which sadly leads to an argument. The argument begins when Liz talks about her desires to have children and start a family one day. Adam is not interested in hearing this topic from Liz as the couple have only just moved in together. From this argument, Adam decides to go elsewhere for the night and starts walking within the city streets. While Adam is walking, he is attacked by an unknown and violently stabbed many times. After this, he wakes up in a different home and discovers he is no longer the man he was previously. Adam has been remade and redesigned from body parts, and a surgeon has been able to him back to life. The mysterious surgeon begins to teach Adam the basics all over again as Adam cannot even complete the most straightforward tasks he once could, including being able to speak. Considering this film seems to have been made on a small budget, the visual effects are rather impressive. The overall look of Adam as a Frankenstein type creature was very positive to see, and it all feels convincing. The actor is believable in this role, and I felt this was a stable element to this film. The film’s opening is also quite positive. Witnessing Adam’s argument with his partner before suddenly getting stabbed had my attention. The same can be said when Adam wakes up and discovers that he is now a completely different person. Overall, this film brings a fabulous idea to the screen, the retelling a modern-day Frankenstein story. The visuals along with the makeup and costume work of the main character, is excellent. Those seeking a horror film with a unique style and take on the classic monsters should most certainly check this film out today.