You Should Have Left 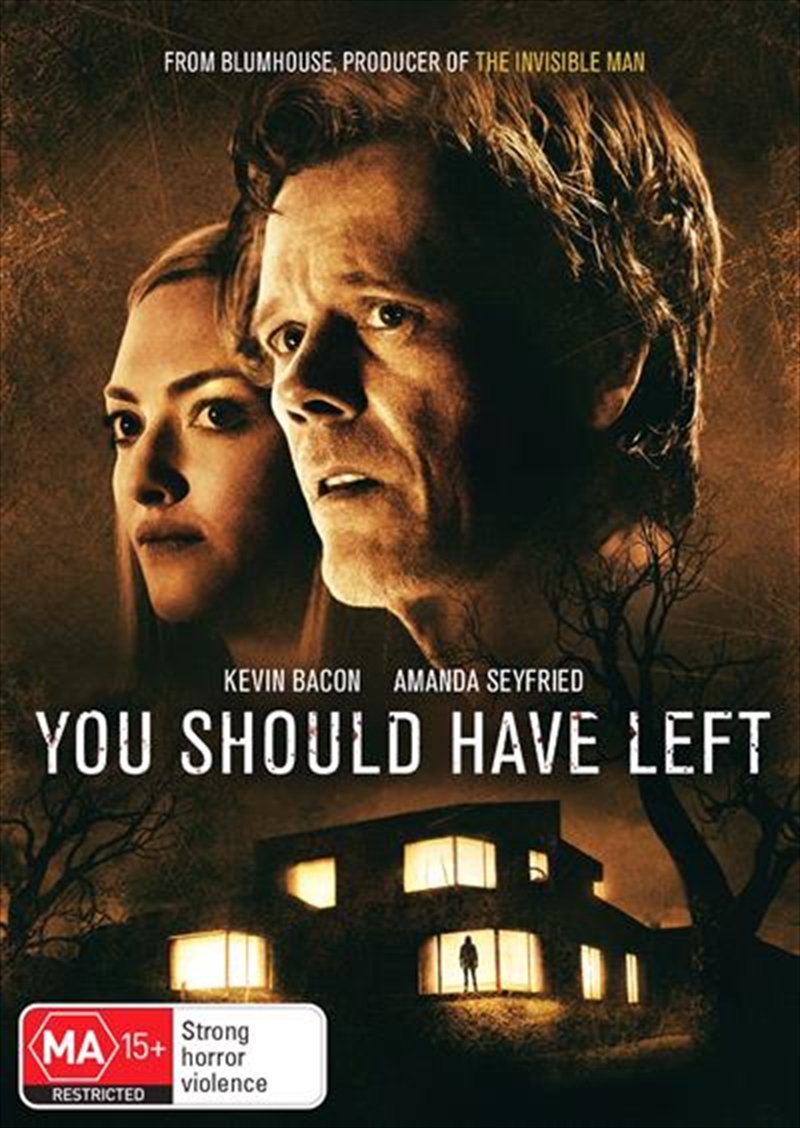 You Should Have Left

The House Finds You.

A former banker, his actress wife, and their spirited daughter book a vacation at an isolated modern home in the Welsh countryside where nothing is quite as it seems.

Review of You Should Have Left by Christopher Pattison

Blumhouse are at it again, with another low-budget and different horror-flick than a lot of mainstream horror films that have released in 2020. The studio has been on a hot streak in 2020 with great releases such as ‘The Vigil’ and now ‘You Should Have Left’. The film re-team's writer/director David Keopp with actor Kevin Bacon on their first collaboration since ‘Stir of Echoes’ in 1999. Kevin bacon stars alongside Amanda Seyfried in this supernatural horror flick. ‘You Should Have Left’, follows a former banker, Theo (played by Kevin Bacon) and his wife who is an actress (played by Amanda Seyfried) and their daughter, who book a holiday at an isolated modern house in the Welsh countryside, where nothing is as it seems, and the horror ensues.
So how was Blumhouses latest horror flick ‘You Should Have Left’?
This film does not reach the heights of some of the studios work; however it proves to be a fun and unique horror venture. ‘You Should Have Left’ benefits from David Keopp’s direction, the script is not as strong as the direction, however, there are some interesting ideas here as well. Kevin Bacon is great in the role. He has proven himself in the horror genre before with films such as; ‘Stir of Echoes’ and ‘The Darkness’. Both bacon and Seyfried elevate the material, as you really do buy their relationship with one another.
‘You Should Have Left’ benefits from strong direction from David Keopp and its likeable leads, with bacon and Seyfried really elevating the material. I had a great time with ‘You Should Have Left’ and am looking forward to adding this to my Halloween rotation. I am giving ‘You Should Have Left’ a 7/10. Pick up this one today on DVD from your local Sanity and/or online!
Chris has written this movie review for Sanity. See more from Chris here

Review of You Should Have Left by Peter Walkden

Theo (Kevin Bacon) is a wealthy man with a dark past which haunts him every night. Theo is also a man who feels frustrated in life. To clear his mind, Theo suggests that he and his wife, Susanna (Amanda Seyfried), that they and their daughter all go somewhere for a holiday. The family end up booking a holiday home in the countryside. Upon arriving at the holiday home, Theo and his wife are quite pleased by the home’s modern style and design. The house seems perfect for the family to relax together. But unfortunate for Theo and his family, there is more to this home than they could ever expect.
Soon Theo has even worse nightmares along with terrible visions, and he begins to suspect something is not right about this home. He also begins to suspect that his wife could be hiding something from him.
This film reunites actor Kevin Bacon and director David Koepp. The two have previously worked together on Stir of Echoes back in 1999. I was rather excited to see the two reunited once again plus this film has also been supported by the well-known film producer Blumhouse (Jason Blum).
This film is most certainly a horror film with an additional element of mystery and thriller. The film gives many questions and mysteries at the very start, along with introducing the audience to Theo and his family. The film’s set design, which is mostly set within a large house, was fantastic. I enjoyed the look and style of this house, and when Theo is having a nightmare, the place is incredibly dark and creepy.
Overall, I found the film’s concept pleasing along with the exciting reteaming of director David Koepp and actor Kevin Bacon. The visuals and audio track are also great, and I enjoyed how this film sets up several mysterious elements, including a home which almost feels like a character itself. Fans of horror films and Blumhouse should most certainly seek this title out.
Peter has written this movie review for Sanity. See more from Peter here

Title: You Should Have Left