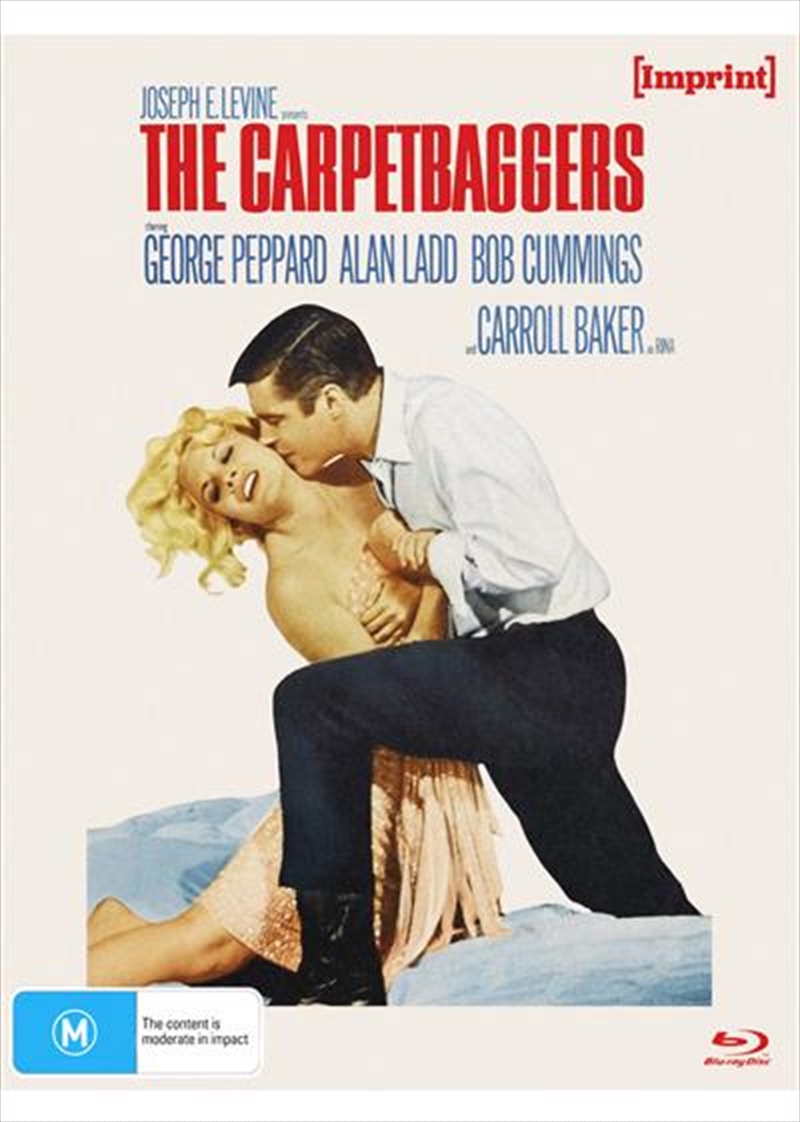 Harold Robbins' best-seller about '30s Hollywood comes to the screen in a torrent of frank, controversial and (for the times) sensational scenes. George Peppard is Jonas Cord, the ruthless tycoon who (with amazing parallels to Howard Hughes) builds a multi-million dollar empire. Carroll Baker, who performs a razzle-dazzle striptease atop a glittering chandelier, is the Jean Harlow-type star. In addition to its depiction of the wild life in Tinseltown's early days, the film also boasts Alan Ladd's terrific final screen performance as the hero's sidekick, Nevada Smith. This cheerfully vulgar classic is a guaranteed good time.

Review of The Carpetbaggers by Christopher Pattison

Another new release from Viavision Entertainment's premium Blu-Ray label ‘Imprint Films’ has made its way to Blu-Ray. ‘The Carpetbaggers’ is the label's ninth release. This is the film's first appearance on Blu-Ray as well worldwide! 1964’s ‘The Carpetbaggers’ follows Jonas Cord (played by George Pepard), who is a disagreeable tycoon who’s building plans, directing films and acting around on the corporate make in 1930s Hollywood. The film was directed by Edward Dmytryk as well. With a great filmmaker at the helm and a saucy tale of love and romance at the forefront of the film's narrative, I was excited to see how this film would turn out. So how was ‘The Carpetbaggers’?
‘The Carpetbaggers’, was a unique watch. The film has an obvious love for the 1930’s era of Hollywood. The film paints the glamorous setting, but also shows the industry for what it was perceived as, at the time. The film benefits from a strong cast, with George Peppard, delivering a robust performance as Jonas Cord. You do not like him at the start of the film, but you do see his charm, but as the film progresses you get to know the character more and start to relate to him. The film deals with its themes well, showing the corporate greed and lust in the industry. I enjoyed this aspect of the film, as for its time it feels unique and different.
‘The Carpetbaggers’, is a well-rounded and well-paced romantic drama. The film's setting is quite unique and director Edward Dmytryk showcases his love for the 1930’s era of Hollywood, with gorgeous sets and a well-rounded narrative. This release was a pleasant surprise, as I had never seen this film before. I am giving ‘The Carpetbaggers’ a 7/10. Pick this one up on Blu-Ray today from your local Sanity or online!
Chris has written this movie review for Sanity. See more from Chris here

Review of Carpetbaggers by Peter Walkden

Jonas Cord (George Peppard) is a man who enjoys living a wild life while his father works. But Jonas finds himself changing his lifestyle very quickly when his father dies. Jonas finds himself saying goodbye to his old life and changing his mindset to nothing but corporate money-making and businessman. Quickly, Jonas decides to change many things with his father's company.
Jonas also finds himself entering other business avenues. Building planes and directing films are just some of the things Jonas decides to take on. Along the way, Jonas has a few encounters with women. At first, Jonas, as character, is not that likeable. He is quite a demanding person and focuses on himself consistently. But naturally, Jonas has lots to learn when it comes to respect and business.
Thanks to the right people at Imprint Films, I am happy to see the transfer of Blu-ray title release is excellent. Images are all sharp and crisp, and considering this film was made back in 1964, I was delighted at the results of this release. There is also an upbeat 5.1 surround track along with the expected LPCM 2.0 Stereo. The English subtitle feature is always welcoming when it comes to a cinematic classic like this.
Overall, I found this film to be exciting and positive, and the film takes a massive risk by having a somewhat unlikeable lead character to begin with. Thankfully, it all works out for the best as a film. It is quite unlike anything I have seen in a while, and I enjoyed the performance by George Peppard. The faint element of a mystery that sneaks into this movie was also a nice touch. If you're seeking a classic cinema, you can't go wrong with this limited edition thanks to Imprint Films.
Peter has written this movie review for Sanity. See more from Peter here