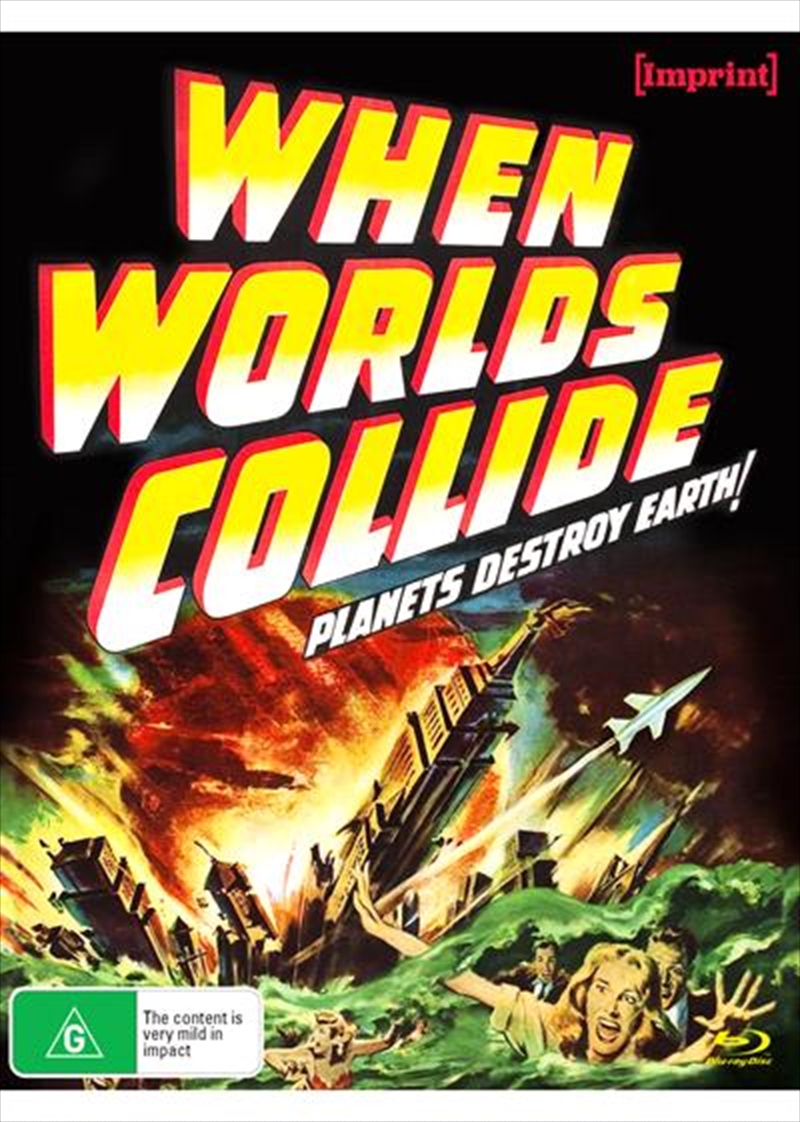 When scientists discover a distant planet is on a catastrophic collision course with Earth, the government refuses to believe the evidence. It's now up to private citizens to finance and build a spaceship to carry a limited number of people and animals to another planet to begin a new civilization. Massive tidal waves, earthquakes, the impending destruction of our world and deciding who gets to live or die brings out the best and the worst in people. This human emotional drama produced by George Pal, combined with Academy Award-winning special effects, make When Worlds Collide one of science-fictions pioneering classics.

Review of When Worlds Collide by Christopher Pattison

Another anticipated ‘Imprint Films’ release for the month of August. ‘When Worlds Collide’ is a new release re-master from ‘Imprint Films’ of the 1951 Science-Fiction classic ‘When Worlds Collide’. ‘When Worlds Collide’ follows a small group of survivalists who frantically work together to complete a rocket which will take them to a new planet, as a new threat of a new star and a planet hurtle toward earth. This 1951 sci-fi film was one I had never seen before, and one I had always heard great things about. After sitting down and finally watching this 1951 classic, I am so pleased I finally got to see this one! So how was ‘When Worlds Collide’?
‘When Worlds Collide’, is a fun science-fiction flick from a simpler time in Hollywood. The film deals with relevant issues still to this day, with the looming environmental threat of space debris at the forefront of the film a theme that has inspired many other films in genre including 1998’s ‘Deep Impact’ and ‘Armageddon’. The film has well-crafted and well-made models and visual effects as well. These models do a great job selling the space travel and the science-fiction, without it ever feeling cheap. Sure, some of these effects are dated, but you can appreciate the creativity and the design of these sets and models used in the film. The film also benefits from great performances. Richard Derr leads the cast as David Randall, and he does a fantastic job with the material. You can see he is having fun with the premise, but he also sells the situation as well. The film is a creative and well-rounded science-fiction film that holds up surprisingly well, considering it is nearly 70 years old. It was an absolute delight to watch.
This is one of the best releases from the newly launched ‘Imprint Film’s premium Blu-Ray label thus far. ‘When Worlds Collide’ is fun, well-made and filled with fantastic visuals and impressive effects for its time. I really had a lot of fun with this release and would highly recommend it to fans of 1950’s cinema. I am giving ‘When Worlds Collide’ an 8/10. Pick-up your copy today on Blu-Ray from your local Sanity or online.
Chris has written this movie review for Sanity. See more from Chris here

Review of When World's Collide by Peter Walkden

A team of skilled astronomers discover a planet which is on its way to hit Earth. The astronomers put all their information about this discovery into a secure container. They then hire a skilled pilot named David (Richard Deer) to deliver the data to a group of scientists, asking them to confirm if this new discovery is real.
Upon delivery, the scientists review all the information, and it is confirmed that all the data appears to be correct. The two worlds will collide, destroying Earth. With the clock ticking, David teaming up scientists will work frantically to create and complete a vast rocket which will allow them to fly out to the new planet which is passing them by. It is hoped they can land safely, and the remaining survivors from Earth will start life all over again.
This is a short film which and it is paced nicely. Even within the first act, a discovery is made, and then the world is getting itself ready for the major disaster to occur. The lead character played by Richard Deer was excellent and is quite a loveable type of character.
The visuals are fantastic. Considering this film was made back in 1951, the achievement of all the special effects alone are outstanding to see. Naturally, there are obvious moments where the use of models is at play, but I truly loved seeing the creativity of the film.
Overall, it feels like it has been a while since I watched a disaster film that pleased me. While the plot of the world coming to an end sounds sad and dramatic, I honestly had a fun time with this film. It is a short film, and the pacing here terrific. It never feels slow, and it is always entertaining. The film visuals are also positive thanks to Imprint Films, and it's a beautiful release. A must-have for movie lovers!
Peter has written this movie review for Sanity. See more from Peter here