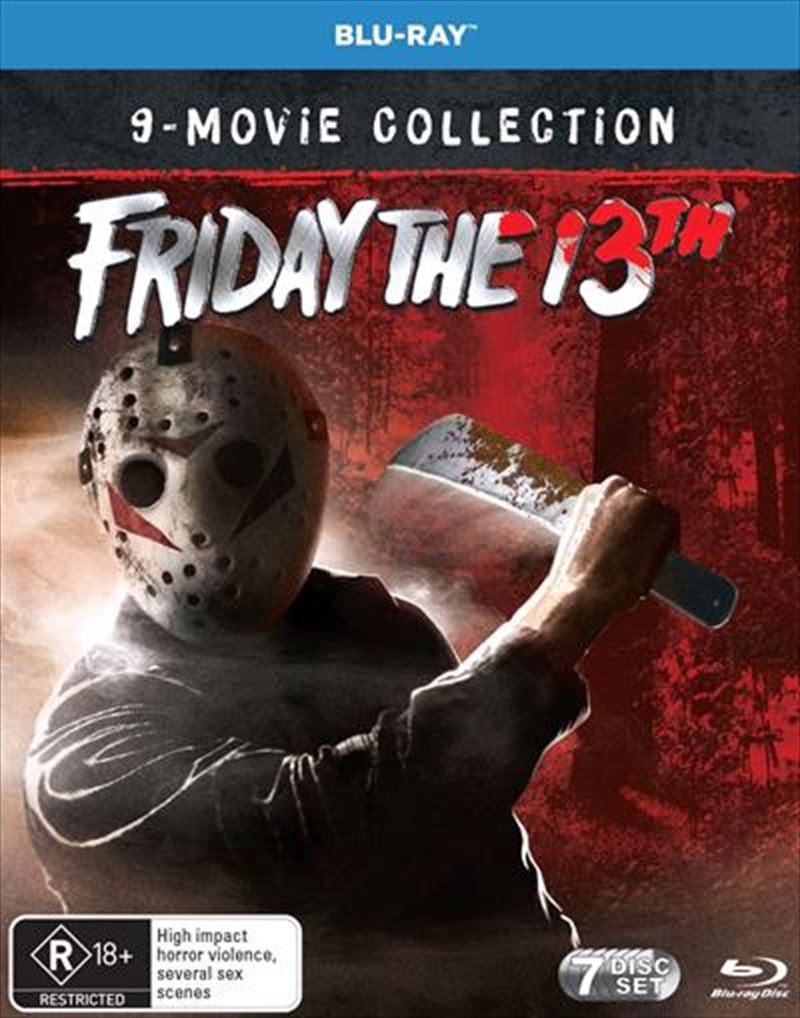 Review of Friday the 13th Collection by Christopher Pattison

‘The horror genre is my favourite film genre, period. Why? Because it can be so subversive, there are so many emotions and feelings that the genre is able to evoke, including, but not limited to, fear, tension, dread, suspense, sadness. The list just goes on. The 1980’s was when the genre was at its peak, in my opinion of course. There were so many different types of horror films releasing into theatres, with an over-abundance of new, fresh sub-genres and innovative effects. You had, sci-fi horror, slashers, paranormal/supernatural and b-movie horror flicks dominating both cinemas and home entertainment.
‘Friday The 13th' in 1980 was riding on the success of John Carpenter’s 1978 horror-classic ‘Halloween’. ‘Halloween’ changed the game in regard to horror, whilst it was not the first slasher to release, it was the first to gain the attention of movie goers proving to be a commercial and critical success. The film created a formula for the sub-genre of the slasher that is still used to this day. ‘Friday The 13th' has become a staple in the horror genre, with one of the most iconic and memorable villains in Jason Vorhees and settings with Camp Crystal Lake, in film history. Jason Vorhees took the mantle from his mother from ‘Friday The 13th Part 2’ all the way through to ‘Jason X’ in 2001. He re-emerged in 2009 in ‘Friday The 13th' a remake of the original slasher from the 1980’s produced by Michael Bay which incorporates plot elements from both the original ‘Friday the 13th' and ‘Friday the 13th: Part II’ as well. Jason’s long-road has seen him become an icon of popular culture, with the Jason Vorhees hockey mask becoming a Halloween costume staple.
In the subsequent sequels, Jason became more of an immortal character. He was near indestructible, the absurd situations that saw Jason survive became a reoccurring gag and a staple of the franchise. He has survived multiple stabbings, explosions and falls, but he just keeps on living. Jason’s design whilst altering, has always remained very similar, with a number of actors donning the classic Hockey mask and military grade jacket, including, but not limited to fan favourite Kane Hodder, Ari Lehman, Derek Mears, Richard Brooker and Dick Wieand. The characters design has been influential for many other slasher villains that have taken to the big and small-screen since, including Victor Crowley (from the ‘Hatchet’ franchise), new iterations of ‘Leatherface’ (from the ‘Texas Chainsaw Massacre’ franchise), these designs all have a similar build with a dark and gritty design that has drawn inspiration from Jason.
The Friday the 13th Franchise has had its ups and downs, but where it truly shines is the self-aware comedy that it brings to the table. These films really do cater to fans, giving audiences exactly what they want, gore, kills and promiscuous characters. In each one of these nine instalments you can find an abundance of all of this and more. These films have also launched the careers of many actors including Kevin Bacon (Friday the 13th), Corey Feldman (Friday the 13th : Part IV & Part V) and Crispin Glover (Friday the 13th : Part IV) just to name a few.
The influence of Friday The 13th is undeniable and this collection is definitely one for the fans. Featuring 9 of the franchises best entries and loaded with special features including making-of featurettes, audio commentary with cast and crew members and deleted scenes. This is a great collection and what better way to celebrate the franchises 40th anniversary then with this awesome collection. This is a must have for fans of the franchise and even newcomers who are yet to check out this franchise. I am giving this collection a 9/10. Pick it up on Blu-Ray today!
Here's my list of Friday the 13th movies from least favourite to most: 9. Friday The 13th Part V: A New Beginning (1985) 8. Friday the 13th Part VII: The New Blood (1988) 7. Friday The 13th Part VIII: Jason Takes Manhattan (1989) 6. Friday The 13th Part III (1982) 5. Friday The 13th (2009) 4. Friday The 13th (1980) 3. Friday The 13th : The Final Chapter (1984) 2. Friday The 13th Part II (1982) 1. Friday The 13th Part IV: Jason lives (1986)
Chris has written this movie review for Sanity. See more from Chris here

Review of Friday The 13th by Peter Walkden

A group of counsellors decide to re-open a campsite called Crystal Lake. But upon a time, a tragic event occurred at this location. Many people within the community called Crystal Lake a cursed area and any who goes there are doomed!
Ignoring the warnings, the group decide to go and renovate the campgrounds. But while the group work on-site someone is murdering the counsellors one by one. Who is the killer? And how are they connected to the camping grounds?
An exciting element to the original film is the fact that it rides on an unknown killer. The murderer is never seen. The director is very smart by using the camera as a first-person view whenever the killer appears.
Another positive factor is the film's eerie musical score which will stay with movie lovers. The soundtrack is excellent when the mysterious murderer is spying around.
As a plot, this film is quite basic, but it is very effective. The film's big reveals are also fun, and I feel the makers of this film had desires of greater things for this franchise.
Overall, if you've never seen the original Friday The 13th, you must! It is quite a fun horror movie! The film's twists are pleasing along with the film's uncomfortable soundtrack. Thanks to Sanity and Paramount Pictures, now is the time to grab the newly released Blu-ray boxset and relive some horror classics starting with the original film from 1980...if you dare!
Peter has written this movie review for Sanity. See more from Peter here