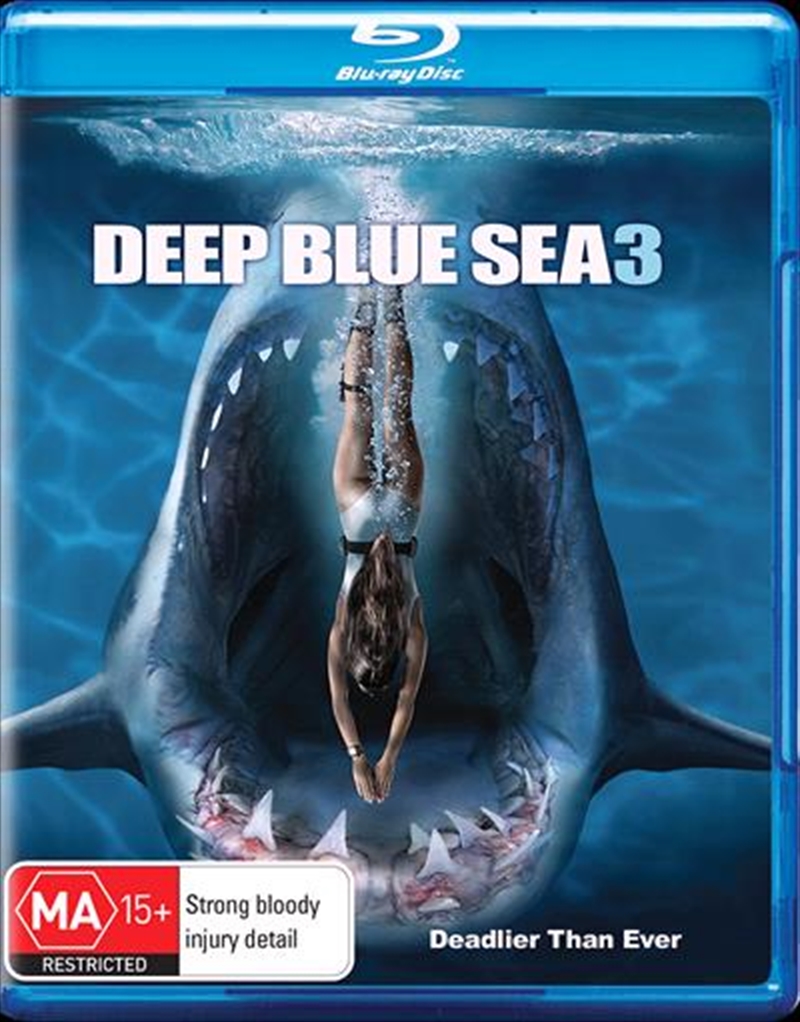 Dr. Emma Collins and her team are spending their third summer on the island of Little Happy studying the effect of climate change on the great white sharks who come to the nearby nursery every year to give birth. Along with the last two inhabitants of this former fishing village, their peaceful life is disrupted when a "scientific" team led by her ex-boyfriend and marine biologist Richard show up looking for three bull sharks who we soon learn aren't just any bull sharks.

'Deep Blue Sea' has gone down as one of the most iconic 1990’s thrillers and for good reason. The film has a great cast, a goofy, fun premise and of course Sharks and for those who follow-me on Facebook you would know that I have a soft spot for any Shark films. In 2018 Warner Bros Home Entertainment rebooted this dormant franchise for a sequel that has a lot of fun with its goofy premise, adding to the shock, the thrills and the b-movie camp that made the original 1999 film so much fun. Now here we are in 2020 and Warner Bros Home Entertainment are back at it again with ‘Deep Blue Sea 3’. Following the events of ‘Deep Blue Sea 2’, ‘Deep Blue Sea 3’ follows a team of scientists who are studying the effect of climate change on great White Sharks (sounds like a recipe for disaster). Their studies are disrupted when a “scientific” team led by her ex-boyfriend shows up looking for three Bull Sharks who we soon learn aren’t just any Bull Sharks, they have been genetically altered... So how was ‘Deep Blue Sea 3’?
‘Deep Blue Sea 3’ is an enjoyable ride, whilst it doesn’t break any new ground in the genre or the franchise for that matter, it has fun with its modern day, B-Movie premise, enjoying the absurdity of both the situation and the execution. The setting of the Island ‘Little Happy’ is fresh for the franchise, breathing new life into the premise. In the previous two instalments we have been in man-made scientific stations, here we are subjected to the great outdoors, our characters are thrown into the deep-end (no-pun intended) and they are on the shark's terms, which is a great new take on the premise. The Shark effects are enjoyable as well, whilst not to the level of a cinematic release they are still really enjoyable and do look great on Blu-Ray. The cast are all enjoyable as well with Tania Raymonde who plays Emma Collins. Tania also appeared in the 2013 ‘Texas Chainsaw 3D’, she knows the genre well and does a great job here in the film. She is a lot of fun and sells the drama quite well.
‘Deep Blue Sea 3’ is a lot fun. Whilst not as a cinematic as the previous two entries in the franchise, the film still does a great job with the premise and expands on what we have seen previously. If you are a fan of the previous two entries in the franchise then you are already going to check out this one but for those on the fence and just want a fun Shark thriller, then this one is right up your alley. Definitely check this one out on Blu-Ray if you get the chance.
Chris has written this movie review for Sanity. See more from Chris here

A group of people, including a leading marine biologist, currently live in a small, old resort known as “Little Happy” in an abandoned fishing village in Mozambique. Here the team are studying and monitoring the effects of climate change on sharks. Leading this team is Emma (Tania Raymonde). Before long Emma and the team are greeted by a large ship and its crew. The leader of this ship is someone Emma is quite familiar with. A member of this ship advises Emma that there are three genetically enhanced bull sharks currently swimming around near Little Happy. The three sharks have already committed murders which is why a team has been sent out on a hunt. Now Emma and her team must work together with the crew of hunters to capture (or kill) all three bull sharks.
Now going on record, I personally enjoyed the first instalment which featured in cinemas back in 1999. While a review has never officially been published, it is certainly one of my favourite guilty pleasures in the brainless creature feature category. But the unexpected sequel was a major disappointment to me. So much so that I publicly announced Deep Blue Sea 2 as my top worst movie in 2018. So how does this third instalment compare?
Firstly, visually we have some major improvements. The visuals of Deep Blue Sea 3 are quite pleasing. Regarding the killer sharks, the film relies on heavy use of CGI, which came as no surprise to me. The effects, including the shark’s tail and their swimming, also looked good.
Let us talk about the death scenes and gore. Those who are seeking an element of gore and horror will be excited to hear me state that this third instalment contains some of the most violent and outrageous death scenes within the franchise. Once again, some of the gore in this film is used to try and shock its audience and deliver humour. Thankfully, the leading characters were an improvement on the last instalment and provided much better performances along with likeability.
Overall, I am thankful that I was able to sink my teeth into this film more significantly than the previous instalment. Those who have seen a Deep Blue Sea film will know what to expect, and Deep Blue Sea 3 delivers just that. It is a brainless moment of entertainment with killer sharks. The plot is basic, but again this is to be expected. This film might just contain some of the most violent and outrageous deaths within the franchise. No matter my final film score, movie lovers will take some pleasure with this direct to disc release.
Peter has written this movie review for Sanity. See more from Peter here