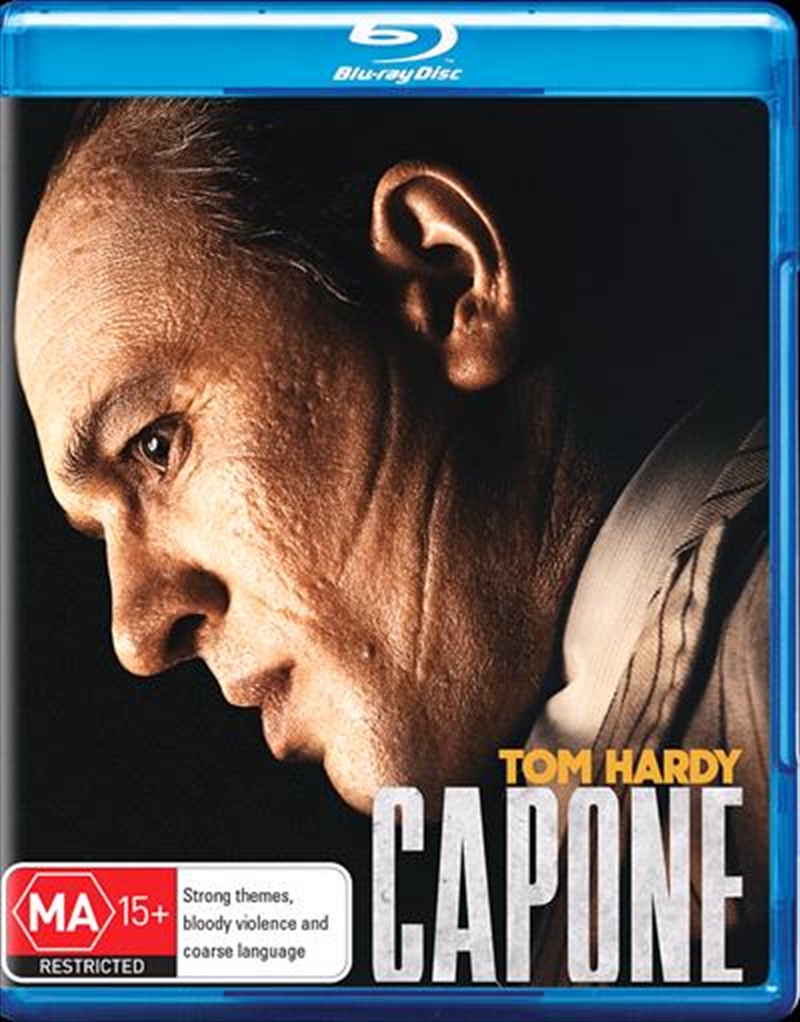 We all pay for our crimes in the end.

Once a ruthless businessman and bootlegger who ruled Chicago with an iron fist, Alfonse Capone was the most infamous and feared gangster of American lore. At the age of 47, following nearly a decade of imprisonment, dementia rots Alfonses mind and his past becomes present. Harrowing memories of his violent and brutal origins melt into his waking life. As he spends his final year surrounded by family with the FBI lying in wait, this ailing patriarch struggles to place the memory of the location of millions of dollars he hid away on his property.

Review of Capone by Christopher Pattison

‘Capone’ at its core is an interesting attempt at a biopic, it does not always hit the mark, but it always remains engaging and interesting. The film balances genres, showcasing elements here of horror and drama, showing the demise of Capone in his later years suffering from the debilitating disease of Dementia. Hardy’s performance as Capone is captivating, he is amazing in the role, showcasing the different aspects of Capone's life in his last year. The supporting cast are also all wonderful with the likes of Linda Cardellini, Matt Dillon and Kyle Maclachlan rounding out the talented cast. The film acts as a character piece really highlighting Capone and his history if violence and the effects of this rather than re-telling the events that led to his notoriety. Capone is depicted as a vulnerable, older man, with his mind gradually deteriorating into nothing, we see a character who is haunted by the past, but also trying to cope with his day-to-day life and coming to terms with his violent past. The film is not for the light-hearted with the graphic deterioration shown through some frightening dream sequences, confronting violence and graphic depictions of dementia. The film does not shy away from these themes and these aspects as they do make up a majority of the film's runtime, showcasing these aspects of the disease in all its forms. Hardy hems up some of his performance here, going over-the-top in certain aspects which may not work for some audiences, but for me personally, it elevated certain aspects of the film giving a surreal and almost dreamlike quality to the film. Director Josh Trank proves once again that he is an up and coming talent behind the camera, directing a thoughtful and at times terrifying film that highlights the low points in Capone’s life. This is a passion project for the filmmaker, and you can tell that he has a unique point of view and perspective he wants to highlight in this film, this story is obviously very important to Trank.
‘Capone’ is a unique and effective biopic that plays unlike any other in the genre. Tom Hardy elevates the material as the notorious gangster, providing a vulnerable and over-the-top performance that stands among one of the most unique performances in the actor's impressive career. For those hoping for a traditional Gangster flick, you will be disappointed as this is a character piece focussed on highlighting the vulnerability of Capone in his last year of his life before his death. It won’t be for everyone but I loved it! I am giving ‘Capone’ a 8/10. Pick this one up on Blu-Ray and DVD today!
Chris has written this movie review for Sanity. See more from Chris here

Al Capone (Tom Hardy) has just completed serving a 10-year prison sentence. He is released from prison and approved to return home to his wife and family. Capone is now 47 years old, and the police continue to keep an eye on him. But upon returning home, Al Capone begins to have health issues, including dementia. Not only is Capone dealing with dementia, but he is haunted by his past as well as showing us some of the visions that haunt him.
As I expected, the leading performance by Tom Hardy is brilliant. The actor himself is almost unrecognizable and has changed just about everything about his appearance for the role.
The style of transitions when Capone is reliving his past, and present are pleasing. The filming style that has been captured is positive and dark. Some moments that Capone relives are borderline horror in its style.
Overall, Tom Hardy returns to the screen to bring another brilliant performance. It is genuinely pleasing to see the actor is almost unrecognizable as Al Capone. As a film, this is quite a dark tale of Capone's last year of living, and the film is loaded with positive visuals as the man himself begins to relive moments from his horrific past. As a story, it is quite fascinating and worth watching even for just Tom Hardy's performance alone.
Peter has written this movie review for Sanity. See more from Peter here