A Rainy Day In New York 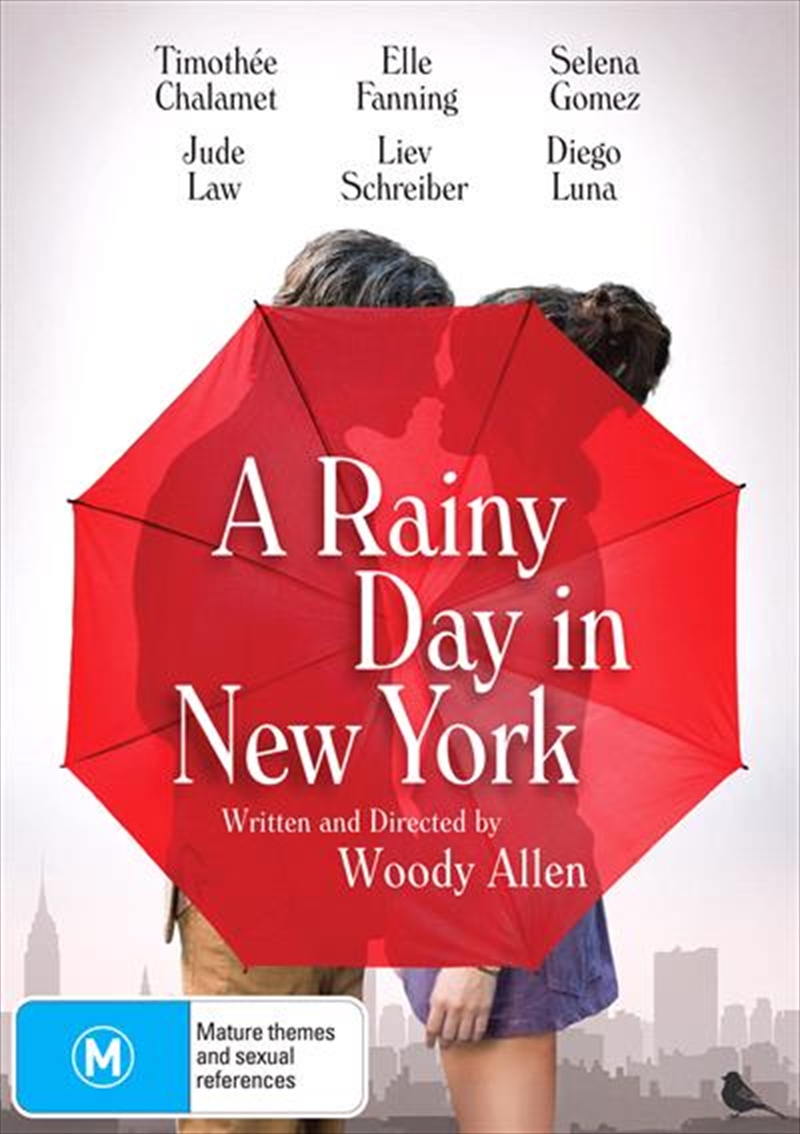 A Rainy Day In New York

Woody Allens romantic comedy A Rainy Day in New York tells the story of college sweethearts, Gatsby (Timothe Chalamet) and Ashleigh (Elle Fanning), whose plans for a romantic weekend together in New York City are dashed as quickly as the sunlight turns into showers. When Ashleigh gets an assignment from the school paper to interview celebrated film director Roland Pollard (Liev Schreiber) in Manhattan, Gatsby seizes the opportunity to show Arizona-bred Ashleigh his favourite haunts in his home city.

Review of A Rainy Day In New York by Christopher Pattison

Woody Allen has been one of Hollywood’s hardest working filmmakers for almost six decades, putting out a new release nearly every year. ‘A Rainy Day In New York’ is the writer/director's latest writing/directing effort. With another all-star cast, with the likes of Timothee Chalamet, Elle Fanning, Liev Schreiber, Selena Gomez, Diego Luna, Rebecca Hall and Jude Law rounding out the talented cast (another specialty from Woody Allen). The film follows a young couple who arrive in New York for a weekend where they are met with terrible, rainy weather and a series of events ensue. So, with over five decades of work under his belt, does Allen still have it or is this a misstep like his last film ‘Wonder Wheel’ or is this another notch in his already impressive filmography?
‘A Rainy Day In New York’ is a return to form for Allen. The film exudes that Woody Allen charm that his films have always had. The talented cast add to this film, making it feel light-hearted and a lot of fun. Chalamat and Fanning have wonderful chemistry with one another, both are terrific here, with Chalamat proving once again that he is one of the best young actors working in the business. Chalamat also has great chemistry with Gomez, the man just is endlessly charming. Allen still has that flare with his direction and writing realistic and interesting characters and dialogue. The conversations in this film are all so engaging and interesting, which makes them feel realistic and engaging. The locations of the film are also so beautiful, he really highlights the New York streets, once again showing his love and admiration for the city. Allen does this so well, whether it's Paris or New York, he always manages to make these cities come to life, romanticising these cities in such a beautiful light.
‘A Rainy Day In New York’ is an engaging and well-rounded drama with beautiful locations highlighted in the film and terrific performances led by Timothèe Chalamat, Elle Fanning and Selena Gomez. This one is definitely worth your time. I am giving ‘A Rainy Day In New York’ a 7/10. You can pick this one up on DVD today!
Chris has written this movie review for Sanity. See more from Chris here

Review of A Rainy Day In New York by Peter Walkden

Gatsby (Timothee Chalamet) is dating a young girl named Ashleigh. But when Ashleigh receives an exciting invitation to New York to interview a well-known director, Gatsby offers to travel with her. But due to unfortunate event, it's not long until Gatsby is left alone by himself wandering around New York to entertainment himself with many extraordinary circumstances to come his way.
The leading performance by Timothee Chalamet in this role is terrific. This film is also filled with cameos from actors such as Jude Law, and Liev Schreiber was also excellent.
Director Woody Allen yet again delivers a lovely heartfelt film which feels welcoming even if it feels slightly familiar. It is evident while watching that Woody Allen is attempting to be creative with several shots, and for the most part, this is also positive.
Overall, I found this film to be a great feel-good film. It also contains a smooth performance from the leading actor Timothee Chalamet. In the end, if you are seeking a light-hearted comedy with a touch of romance, this one comes quite natural to recommend.
Peter has written this movie review for Sanity. See more from Peter here