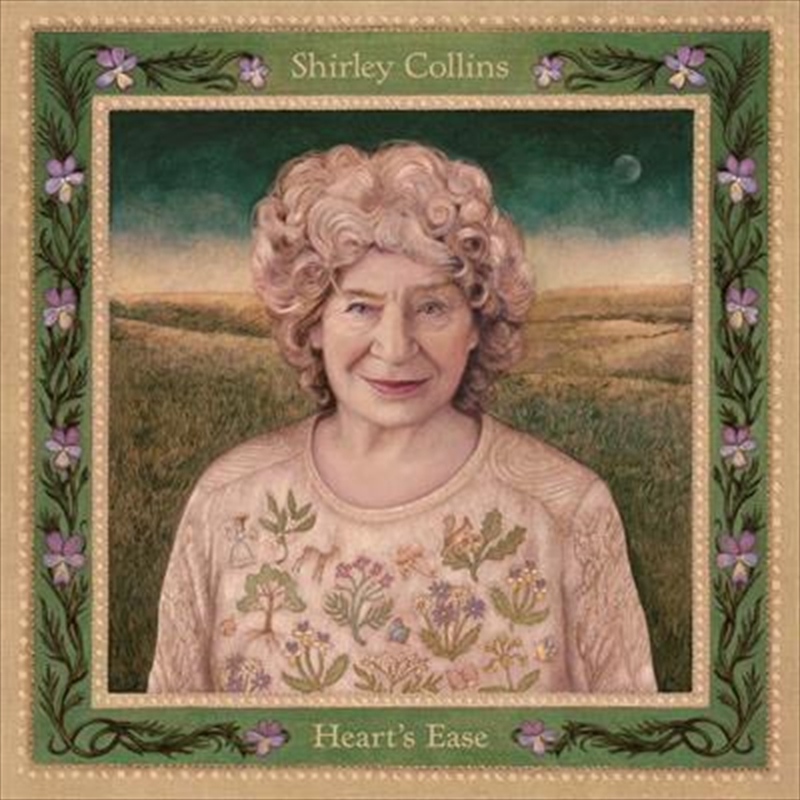 Shirley Collins releases Heart's Ease, her second album for Domino. Heart’s Ease follows 2016’s Lodestar; which on its arrival, seemed like a musical miracle - an enthralling new LP from a woman who is widely acknowledged as England’s greatest female folk singer, but who had not recorded an album for 38 years.

With Heart’s Ease, Shirley delivers a record even stronger than Lodestar having completely regained her confidence, and singing so well that you can’t believe she was away for so long. As Shirley put it, “Lodestar wasn’t too bad, was it? But when I listen to it, it does sometimes sound rather tentative. I had to record it at home because I was just too nervous to sing in front of somebody I didn’t know. This time I was far more relaxed – even though I went into a studio.” Recorded at Metway in Brighton, Heart’s Ease is as compelling and original as Shirley’s great albums from the Sixties and Seventies.

There are traditional songs, of course,  from England and the USA, but there are also more new songs than in the past (four non- traditional tracks) and there’s even a burst of experimentation that hints at possible new directions to come.

The first song to be shared from Heart’s Ease is “Wondrous Love”; its tune comes from an 18th Century English ballad about the infamous sea captain William Kidd, who was hanged for piracy in 1701. Collins first heard the hymn at a Sacred Harp Convention in Alabama (Collins and Alan Lomax recorded it on their field recording trip in 1959). Shirley has decided to sing it now, she said, “because songs are stored in my memory for a great many years, and suddenly it seems the right time to bring them out again.” --- In the years between For As Many As Will (1978) and the release of Lodestar, Shirley suffered from a form of dysphonia, had lost her singing voice, and was never expected to sing again – certainly not in public.

Lodestar was a delightful surprise to all her fans and the folk community, and once Shirley had started to sing again, she was not going to stop. “I’m absolutely consumed by this music,” she said. “I have always loved it so much. I’m still learning songs and just want to keep learning them. I thought ‘somebody has got to sing these songs, so it might as well be me!”

Collins followed Lodestar with a remarkable blitz of activity for a lady in her eighties. There was a film, and soundtrack album, The Ballad of Shirley Collins. There was a new autobiography, All in the Downs, which won the Penderyn Music Book Prize (beating the Beastie Boys). And there were high-profile come- back concerts, including a memorable appearance at London’s Barbican, at which she was backed by an exceptional group of friends and musicians, the Lodestar Band. She may have felt nervous being back on stage, “but I feel so supported by that band. And every song I sing I love anyway – it’s not a hardship to sing the songs!”. All of which is reflected in her second come-back album, Heart’s Ease.

Collins’ intriguing choice of songs on Heart’s Ease includes two with lyrics by her first husband Austin John Marshall, a graphic artist and poet who produced several of her albums and had the inspired idea of getting Shirley to work with blues/jazz/world music guitarist Davy Graham on that extraordinary album Folk Roots, New Routes in 1964.

There are more family memories with “Locked In Ice”, written by Dolly’s son the late Buz Collins and the most startling new piece is the finale, “Crowlink”, named after a pathway on the South Downs overlooking the English Channel “where I love to be,” in which Shirley sings against a moody, atmospheric fusion of Ossian Brown’s hurdy-gurdy, and electronica and field recordings of  waves and sea birds from Matthew Shaw.

Heart’s Ease is a glorious reminder that Shirley Collins is still in a class of her own, both as a folk singer with a distinctive no- nonsense style that is all her own, and as an innovator. And she certainly doesn’t intend this album to be her last.  “I have such a huge memory of songs, so many of which I still want to sing. And I wasted all those years not singing, so now I’ve got to catch up a bit!”

2. Rolling In The Dew