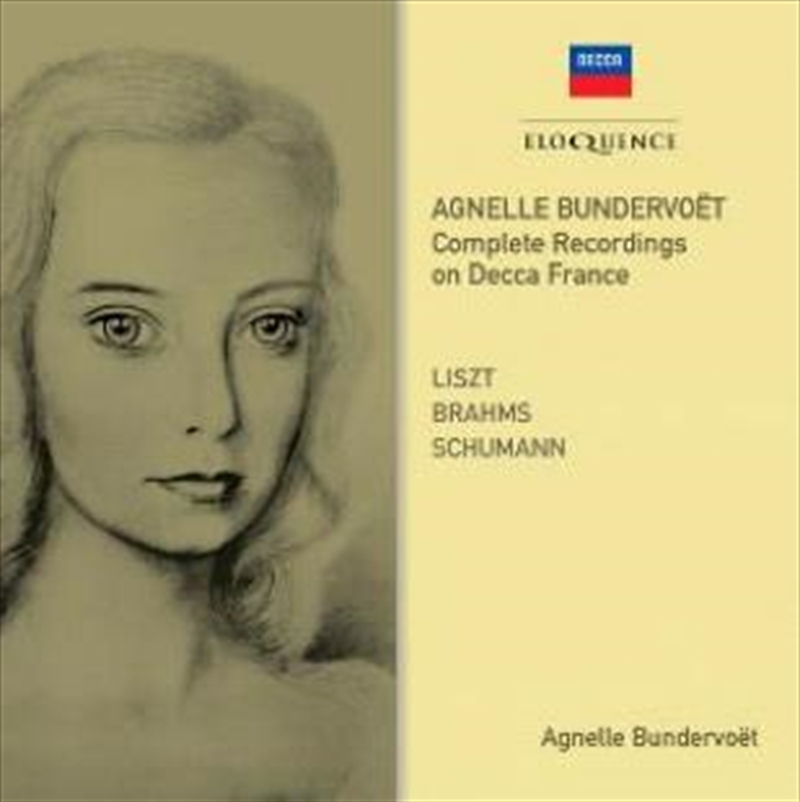 Three exceptionally rare Decca LPs of a much prized French pianist, newly remastered and released on CD for the first time.

Rheumatism forced Agnelle Bundervoët to retire from the platform at the peak of her career in the late 1950s, though she continued to pass on to her students at the Conservatoire of Versailles the beautifully defined articulation, mastery of high expressive contrasts, and remarkable rhythmic drive that distinguish the recordings of Schumann, Brahms and Liszt on this collection, which will attract the attention of all pianophiles. One of those students was Frédéric Gaussin, who contributes a personal memoir and authoritative survey of her life and career to this Eloquence collection. He remembers Bundervoët as a very demanding teacher: 'implacable but fair, generous, an acute psychologist, a spiritual person, dispensing pieces, studies and writing exercises with the knowledge and far-sightedness of a world-class physician'.

Born in 1922, Bundervoët began to learn the piano at the age of four, and within three years she was enrolled at the conservatoire in Marseilles. She was accepted at the Paris Conservatoire by the age of ten, even though she was too young to undertake the formal program of study, but the pedagogue Lazare-Levy recognised her exceptional intellect, prodigious technique and innate musical gifts. She was awarded the conservatoire's Premier Prix for six years in succession, and her talents extended beyond the piano to singing, organ playing and choir directing.

Her first album, a Bach recital, was awarded a Grand Prix du Disque, but she was dissatisfied with the engineering of the Ducretet-Thomson recording; the trio of Decca albums (recorded in 1955–57) enjoys a far wider dynamic range and a much richer timbral palette, more faithfully capturing the elegance and refinement of her playing in the flesh. They hardly reflect the breadth of her repertoire, which took in much new music, but they now count as a precious testament to a notable if now little-known inheritor of the French piano tradition.

'The musical pleasures of Agnelle Bundervoët's performance cannot be overstated … the poetic spell, the magic of contrasts, the visionary unity mark this interpretation with the seal of Schumannesque authenticity … The excellent recording, sympathetic to the quick reflexes of Agnelle Bundervoët, should appeal to all Schumann enthusiasts.' Vie et Bonté, December 1956.