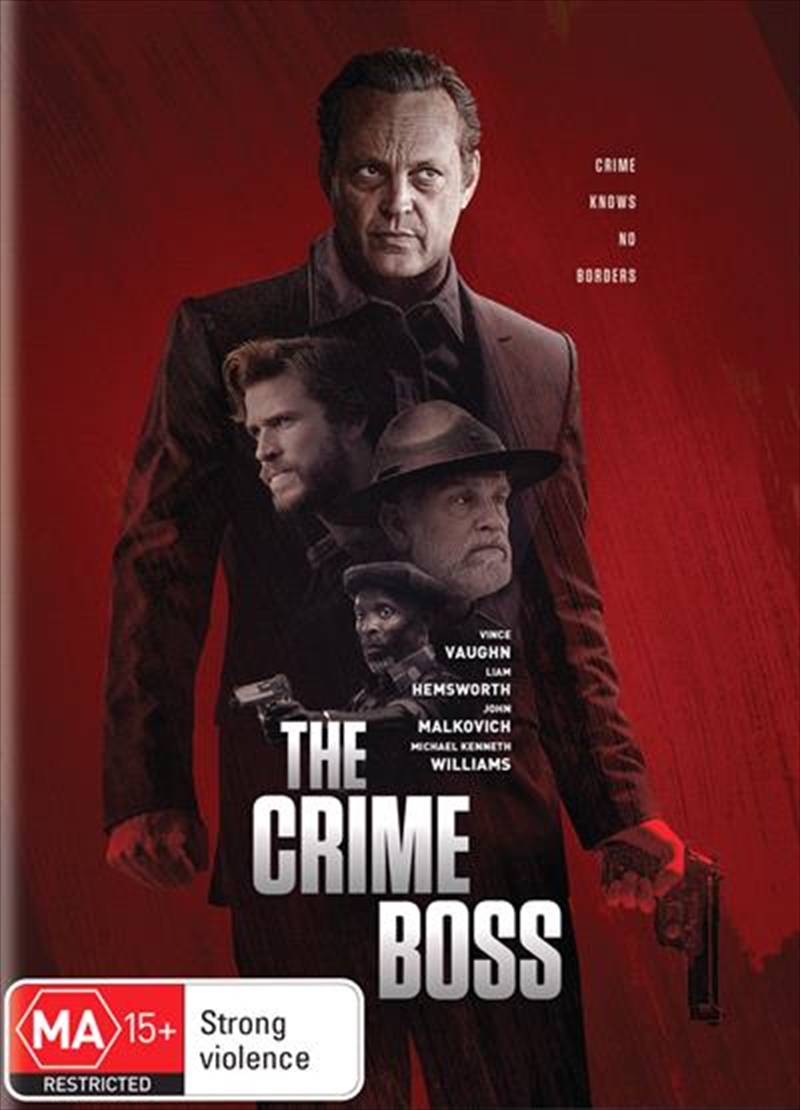 Kyle and Swin are working their way to the top...but the top has other plans.

Kyle and Swin live by the orders of an Arkansas-based drug kingpin named Frog, whom they've never met. But when a deal goes horribly wrong, the consequences are deadly.

Review of The Crime Boss by Peter Walkden

Kyle (Liam Hemsworth) and Swin (Clark Duke) are drug runners working for a boss they have never met face to face. All they know about their boss is that he (or she) goes by the nickname of “Frog”. Whoever Frog is, it’s quite apparent they have several strict rules which should never be messed with or ignored. Not only that, Frog has many people who are working under them as drug runners like Kyle and Swin. As the film opens up, audiences who watch this film will have two critical questions. Who is Frog? And which characters can be trusted?
While Kyle and Swin obey the rules and carry out requests from Frog, they naturally have desires to one day move up in the world or take life to the next level. But unfortunately for Kyle and Swin, their world is turned upside down when a drug deal goes unexpectedly wrong. Kyle and Swin understand that the consequences can be deadly unless they can work out something else before Frog discovers the truth and serves out the severe consequences.
For those who are not aware, this film is a directional debut by Clarke Duke. Clark Duke not only serves as the film’s director but he’s also credited as the film writer. But wait, there’s more! Clark Duke is paired up next to Liam Hemsworth as a fellow actor in this film (Swin). It’s quite an impressive workload for this feature debut. Speaking of actors, this film also includes John Malkovich, Michael Kenneth Williams & Vince Vaughn. I truly enjoyed seeing actor Vince Vaughn in this crime story. His presence was extremely pleasing.
The style and pacing of this film does feel familiar. Many characters are introduced during the first act, and the fact Frog is kept as a mysterious character make it clear that the film is trying to hook its audience with a few mysteries. What may seem slightly confusing at first does thankfully pay off in the long run. The film gives plenty of screen time to the many different characters. It even provides some backstories for some of them, which was also a pleasant surprise and critical for character developments. The film is divided into chapters with a title for each chapter- something which also feels familiar as it is something director Quentin Tarantino would have done.
Overall, The Crime Boss delivers what I feel is an exciting story which takes some effort to get in motion. As a directional debut, there is something refreshingly different about this film, and I think the director was quite passionate about crime stories. The performance by Vince Vaughan was also a highlight as the funny man proves yet again that he can provide a gripping performance. Those who are seeking a “Quentin Tarantino” type crime film should most certainly take note and seek this film out.
Peter has written this movie review for Sanity. See more from Peter here

Review of The Crime Boss by Christopher Pattison

After Vince Vaughn’s serious turn in 2014’s ‘True Detective’ season 2 I have been eagerly awaiting for him to take on more roles of this nature, since 2014 we have been graced with ‘Brawl In Cell block 99’, ‘Dragged Across Concrete’ and now ‘The Crime Boss’. 2020’s ‘The Crime Boss’ was directed by Clark Duke who you might know from ‘Hot Tub Time Machine’ and stars Vince Vaughn, Liam Hemsworth and Clark Duke. The film follows Kyle (played by Liam Hemsworth) and Swin (Played by Clark Duke), who after a drug deal goes wrong are facing the deadly consequences from their boss Frog (played by Vince Vaughn). With a premise straight out of the 1980’s and a talented cast I was looking forward to ‘The Crime Boss’, so how was ‘The Crime Boss’?
‘The Crime Boss’ is a fun throwback film to the 1980’s crime/thrillers and gangster flicks that dominated the silver screen during the decade. The film has a great ensemble cast, with everyone having fun with the film's premise and really hemming up their performances, especially John Malkovich. Duke and Hemsworth have great chemistry with each other, really feeling like the odd couple they are. Vince Vaughn is also truly menacing as Frog, giving another strong performance in a more serious role. Vaughn continues his hot streak here and proves that he has the chops for these types of roles and hopefully will continue this trend of taking on serious roles playing a character out of his usual schtick. The direction from first-time director Clark Duke is also top-notch, you can tell he loves films from the bygone era of Hollywood, with this film drawing obvious inspiration from 1980’s and 1990’s classics; ‘The Untouchables’, ‘Goodfellas’ and ‘L.A Confidential’. The film is very stylised, and I liken this style and tone to Ruben Fliecher’s 2013 Gangster flick, ‘Gangster Squad’, both films had an ensemble cast and had fun with their setting and premise. I am very interested to see what he will do next.
All in all, ‘The Crime Boss’ was an enjoyable 1980’s throwback gangster film, with fun performances from Clark Duke and Liam Hemsworth and a truly menacing, villainous turn from Vince Vaughn as Fog. This is one I had a lot of fun with and would whole-heartedly recommend it to genre fans. Pick this one up on Blu-ray and DVD today!
Chris has written this movie review for Sanity. See more from Chris here