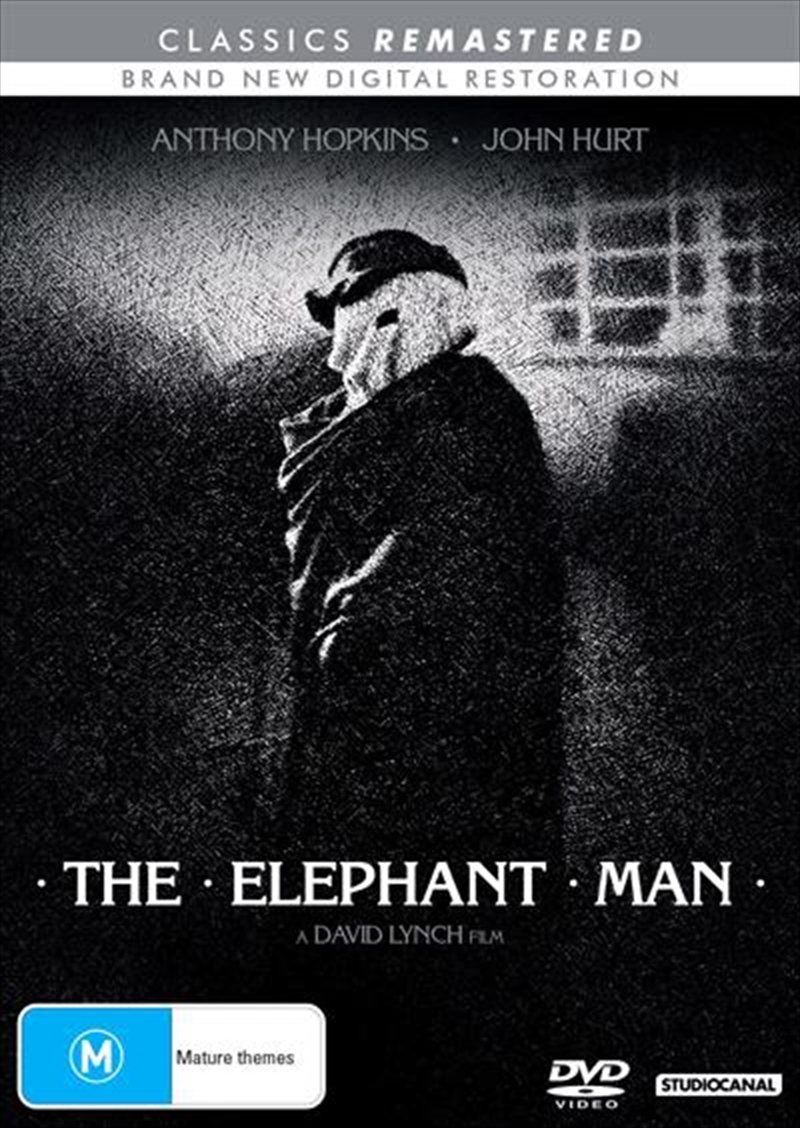 A Victorian surgeon rescues a heavily disfigured man who is mistreated while scraping a living as a side-show freak. Behind his monstrous faade, there is revealed a person of kindness, intelligence and sophistication.

Review of The Elephant Man by Peter Walkden

Frederick (Anthony Hopkins) is a professional surgeon who discovers a disfigured man known as “The Elephant Man”. The Elephant Man became disfigured when his mother had a tragic accident involving Elephants while she was pregnant. The man spends his day as a side-show freak living behind a mask and hidden from the world. He is also consistently abused and mistreated by a man who represents him. When opportunity allows, Frederick decides to reach out and attempt to help The Elephant Man. He soon discovers that underneath his mask and disfigured face is a man who is full of intelligence, kindness and more.

Performances here are breathtaking. Actor Anthony Hopkins brings such high amounts of strength, confidence, and compassion to the screen. While his character is quite wise and professional, I enjoyed seeing how much care he also has for others, particularly when it comes to this mysterious, unknown man. For those who are not aware, actor John Hurt plays the Elephant Man. There are so many elements about his performance that I also enjoyed too, but for the sake of spoilers, I will not reveal them. But I found myself sympathising for the character and the actor as this type of role would not have been a simple walk in the park. After doing some research, I later found out that the required makeup work alone to make the actor look disfigured for this film took eight hours to apply each time- that is impressive.

For those who are not aware, The Elephant Man was filmed in Black and White. I found the visual style rather creative. After watching this film, I could not imagine watching it in colour. The Ultra HD and Blu-ray release is also impressive to see, and it’s great to see many improvements have been made to this 1980s film.

Thanks to the director David Lynch, this film generally feels like a work of art, and it is quite powerful to witness. There were honestly some moments where I just wanted to pause the movie and enjoy some of the creative shots that David Finch managed to bring on-screen. The filming style alone captures many moments of sadness and tension.

Overall, The Elephant Man is a touching and compelling story. Considering the film is now over 40 years old, I am amazed at how relevant and robust the key messages were and how they still held up in today’s world. Performances from both Anthony Hopkins and John Hurt are incredible, and when combined with the directing style of David Lynch, it all adds up to a slice of cinema magic. A must watch for any movie lover.

Review of The Elephant Man by Christopher Pattison

For decades now, Anthony Hopkins has dominated the silver screen with methodical and powerful performances. His memorable turn as Hannibal Lector in ‘The Silence of The Lambs’ goes down as one of his best, but a forgotten performance of his was his powerful turn in 1980’s ‘The Elephant Man’ accompanying the late, great John Hurt. ‘The Elephant Man’ tells the tale of surgeon Fredrick Treves (played by Anthony Hopkins) who rescues a disfigured man John Merrick (played by John Hurt) from a life of performing as a sideshow freak. The two form a bond as Treves learns that behind Merrick’s seaming monstrous façade, he is a man of sophistication, intelligence and kindness and the two develop a bond and friendship. This was a film I had never seen before. Yes, I know it’s a classic, but it has always escaped me and due to the limited access of this one on physical media formats, it has become increasingly more difficult to gain access to viewing it. Man am I disappointed about that. This is one of the most beautiful yet tragic films I have ever seen. The film is rich in character, the themes of humanity resonate heavily with audiences as they transcend time and still remain relevant today. The performances are amazing, Anthony Hopkins is terrific, he plays an empathetic type, it is definitely against type, we have never seen this vulnerable side of Hopkins before and he does such a fantastic job. John Hurt is truly fantastic as John Maverick as well. The performance is quite physical, John Hurt had to wear a lot of make-up and prosthetics during the film to give the look and the aesthetic of the elephant man, the effects mind you are truly terrific, this required a truly physical performance from the actor. The humanity that Hurt shows is truly beautiful and I think this is John Hurt's best performance in a truly stellar career, may he rest in peace... David Lynch’s direction is also terrific. This is an early feature from the director and for me personally, it ranks among the directors' best work. His decision to film in black and white was a great decision as well. It really sets the tone for the film adding depth and weight to scenes, making it feel more attached to the period in which it was set. Lynch has gone on to direct other great films, including his involvement with one of my favourite television series of all time (as writer, director and producer) of ‘Twin Peaks’, The Elephant Man personally, ranks among one of my favourite films. Granted it is not as thought provoking as some of the directors other works including ‘Mullholland Drive’, it is the rich characters, the fluent direction and the wonderful performances that elevate the material for me to something greater, something more personal. The film feels more like a documentary and I think that is a testament to Lynch’s direction and writing of this film. I was flawed by this film. The stunning direction, the beautiful cinematography and the masterful performances make this film a masterpiece. I am giving ‘The Elephant Man’ a 10/10. This film is truly a piece of art and ranks among one of the best films in David Lynch’s impressive filmography if not the best. Pick this one up on DVD, Blu-Ray and 4K UHD today!
Chris has written this review for Sanity. See more from Chris here