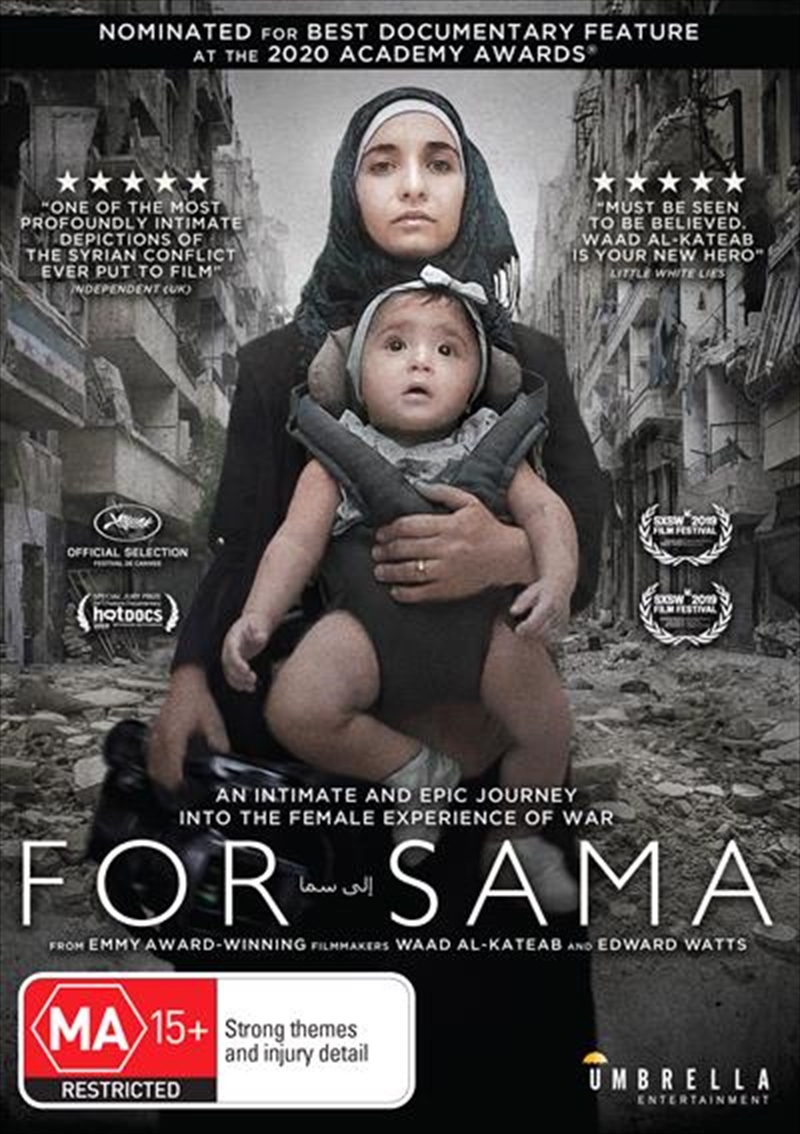 FOR SAMA is both an intimate and epic journey into the female experience of war. In the form of a love letter from a young mother to her daughter, Sama, the film tells the story of Waad al-Kateabs life through five years of the uprising in Aleppo, Syria as she falls in love, gets married and gives birth to Sama, all while cataclysmic conflict rises around her. Her camera captures incredible stories of loss, laughter and survival as Waad wrestles with an impossible choice whether or not to flee the city to protect her daughters life, when leaving means abandoning the struggle for freedom for which she has already sacrificed so much.

Review of For Sama by Eddie @ The Movie Guys

This Oscar nominated documentation of the war in Syria, specifically in the city of Aleppo, focused around Waad al-Kateab, her husband Hamza and their new baby daughter Sama, is one of the most confronting, heartfelt and unique documentary experiences in some time, that while not easy viewing, demands too be seen for its first-hand account of a situation the world as a whole largely chose to ignore.
Filmed by Kateab, as she began to document the uprising in the country that saw everyday citizens stand up to its long tormenting government regime, in turn becoming an account of the world in which her new child was born into and the world in which her and her husband decided to fight for, this is as raw and as intimate as it gets as Kateab takes us into the ground floor of a long lasting conflict that is more impactful and truthful than any news reports we’d care to investigate.
Spanning a number of years, throughout For Sama we are taken into first-hand accounts of the death toll of this conflict, experiences that won’t soon be forgotten as Kateab’s camera refuses to shy away from the harsh realities of the situation, but we are also offered glimpses of the humanity and spirit that exists when no other hopes do, giving the film a rare power to both shock and inspire.
I really can’t recall witnessing a documentary film as frank and unashamed to give us the real details, there’s no sugar coating here, there’s no maybes and might’s, For Sama gives us the real, the true and the horrific and throughout Waad and Hamza make for inspiring central figures, even if at times we can’t come to the full understanding of their decision to remain in a situation that seems so hopeless throughout.
Final Say –
Both an insightful and unforgettable document of the war in Syria and the power of love and parenthood, For Sama is hard to stomach at times but its unbiased look at its subject and touching portrait of humanity with its back against the wall makes for unforgettable viewing.
See more from The Movie Guys on their website