On Becoming A God In Central Florida - Season 1 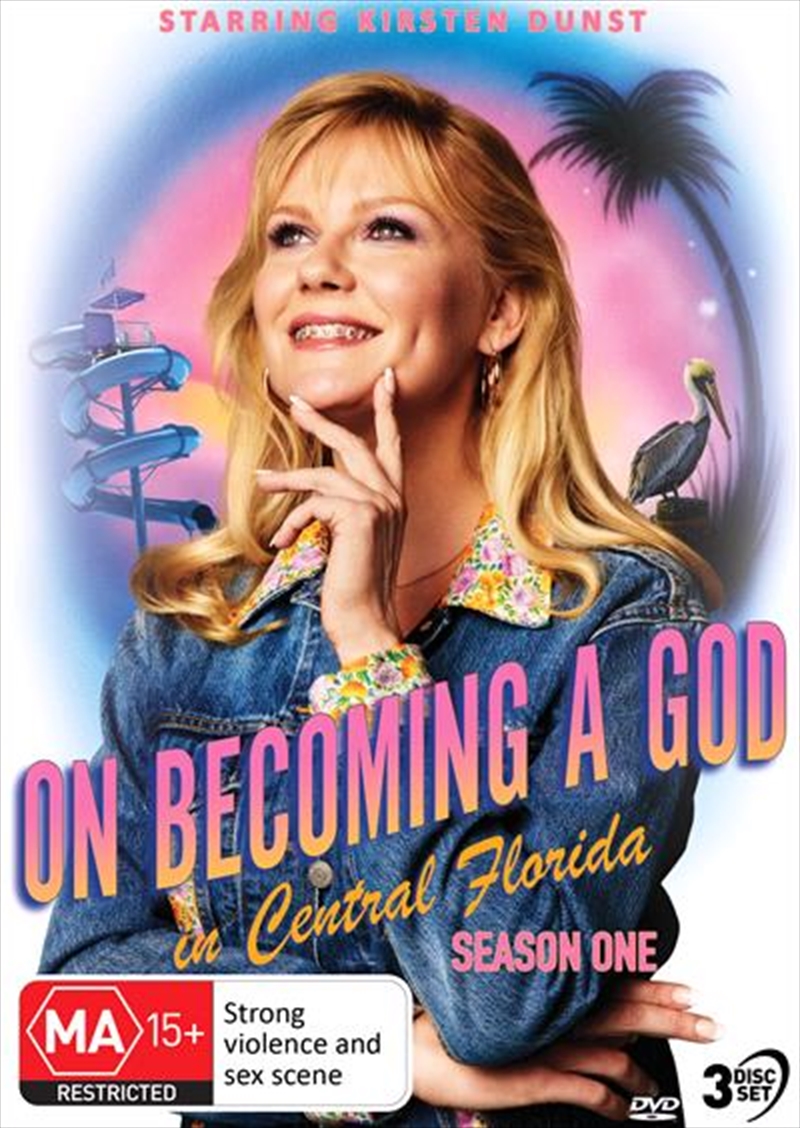 On Becoming A God In Central Florida - Season 1

Set in a small Orlando-adjacent town in 1992, this dark comedy series stars Kirsten Dunst as Krystal Stubbs, a minimum-wage water park employee who lies, schemes and cons her way up the ranks of Founders American Merchandise (FAM)the cultish, flag-waving, multibillion-dollar pyramid scheme that drove her family to ruin in the first place. Determined to make a better life for herself, Krystal dives deep into FAM, until her business begins to affect those closest to her.

Review of On Becoming a God in Central Florida: Season 1 by Peter Walkden

Set in the year 1992, the show follows a family who live in Central Florida. The father and husband of this house, Travis Stubbs (Alexander Skarsgard), has been pursuing his long-life dream of one day quitting his job and becoming a millionaire. To achieve this dream, Travis begins to invest his time, money, energy and everything he within him towards a company known as “FAM”.
“FAM” is a brand that provides many house items such as cleaning products, paper towels, toilet paper, and the list goes on. Travis is required to not only invest himself, but he also needs to find other people who can make the same commitment which will result in the brand multiplying. Essentially this company runs on a pyramid scheme.
But after a tragic incident with Travis, it’s up to Travis’s wife, Krystal Stubbs (Kristen Dunst), to step up and do whatever it takes to looks after herself and her baby daughter. Krystal begins to investigate the true workings and operations of the “FAM” structure. Daily, Krystal also works at her local water park and is generally unsatisfied with her current role.
This TV Series introduces several characters with Krystal being the prime focus. As a character, Krystal is someone you wouldn’t want to mess with in real life. After the tragic incident involving her husband, Krystal is out for vengeance, survival and truth. Krystal also has in the past lived a life of being poor and refuses to go back to her old ways.
Another character Krystal interacts with is her husband’s business partner, Cody Bonar (Theodore Pellerin). Cody is the man who convinced Krystal’s husband in the first place that “FAM” is the way to make millions. Naturally, the character of Cody acts like a “used car salespersons”. He will try to sell the brand to anyone he meets even if it’s local strangers he finds at his local café.
This series is a comedy, but it’s also a type of comic satire. Some moments are humorous based on situations, and for me, just seeing Krystal get angry and dealing with the consistent surprises that keep coming her way was also funny to see. As a plot, I found myself curious after watching the first episode. Initially, I started watching this series on my own, but even my wife became hooked on it too and together we watched the entire series in a matter of days. The series has such a fun set up that it wasn’t hard to keep watching each episode.
As for performances, Kristen Dunst was fantastic in this series. The actress is capable of providing such a dark and brutal side to her character. On the flip side, you can also understand her frustration and the choices she makes because of the situation she is in. Even if she does something that seems wrong, you can cheer her on no matter what because that’s how convincing the actress is at playing this type of character.
Overall, I was personally curious to watch this show mostly because I felt like the world hadn’t seen much of the actress, Kristen Dunst, in a while. Thankfully this is a positive series. With a great setup, I’m proud to say I was determined to finish the show in a matter of days. The plot is quirky as it surrounds the topics of a family drawn into a multibillion-dollar scheme and the woman who will do anything for her family and to gain wealth. I enjoyed many of the elements within the show, and I’m curious to see Season Two, which has already been greenlit by the film studios.

Peter has written this review for Sanity. You can see more from Peter here
DETAILS

Title: On Becoming A God In Central Florida - Season 1