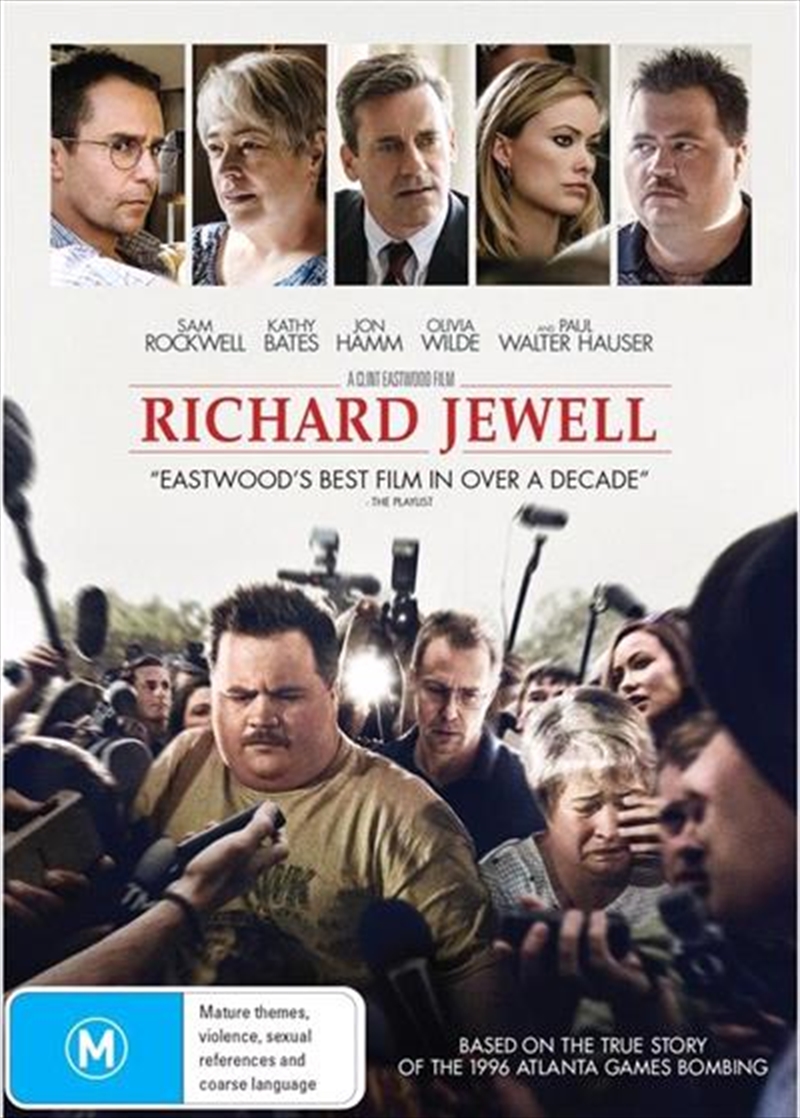 Based on the true story of the 1996 Atlanta Bombing.

There is a bomb in Centennial Park. You have thirty minutes. The world is first introduced to Richard Jewell as the security guard who reports finding the device at the 1996 Atlanta bombinghis report making him a hero whose swift actions save countless lives. But within days, the law enforcement wannabe becomes the FBIs number one suspect, vilified by press and public alike, his life ripped apart. Reaching out to independent, anti-establishment attorney Watson Bryant, Jewell staunchly professes his innocence. But Bryant finds he is out of his depth as he fights the combined powers of the FBI, GBI and APD to clear his clients name, while keeping Richard from trusting the very people trying to destroy him.

Clint Eastwood is one of my favourite directors of all time, directing ‘Mystic River’, Unforgiven, ‘Gran Torino’ and more recently ‘American Sniper’. Just a little reminder that he is also 88 years old and still making quality entertainment and frequently as well with ‘The Mule’ only releasing in 2018, 12 months prior to the release of ‘Richard Jewell’. With ‘Richard Jewell’ however, I was sceptical, he has had a few misses in recent years (‘15:17 To Paris’ being a massive misstep in my opinion), and so I remained cautious before watching this film.
So how was ‘Richard Jewell’?
‘Richard Jewell’ was a heart-warming, interesting and effective drama that really highlights the effects the misconstruing of media can have on someone’s life. Richard Jewell, essentially was the security guard who located the Centennial park bomb at the 1996 Olympics which killed two people and injured over one-hundred and ten. Initially, the media are painting him as a hero, but soon after, the FBI then treat him as their number one suspect as he fits the profile of the ‘lone bomber’.
Clint Eastwood loves to tell the stories of the little man, highlighting heroic acts of the everyday men and women, this is a classic example of that. The film shows a detailed and accurate look at how the misappropriation of details in the media can really destroy someone’s life. Richard has just done the right thing and done his job, but because of the incompetence of the FBI and the media wanting to publish a story so that they can sell their property. The performances are all fantastic, Sam Rockwell as always shines as Richard’s lawyer ‘Watson Bryant’ and I thought he was really terrific in the role. Paul Walter Hauser as Richard Jewel was the stand out to me as well. He has appeared in a few different properties now with a performance in 2018’s ‘Black Kkklansman’ and a reoccurring role in ‘Cobra Kai’ as well as featuring in the upcoming Spike Lee film 'Da 5 Bloods'. I can see him getting a lot of work coming up as he really did steal a majority of the scenes that he was in. Kathy Bates, Jon Hamm and Olivia Wilde all do great jobs in the film as well, but are overshadowed by the strong work from Hauser and Rockwell.
This film really did touch me emotionally, more so than I was expecting and I think that comes down to the very personal touch that Clint Eastwood has added with his direction, you can really tell that he loves this story and believes that this is a story that needs to be told. The ending was satisfying and after watching the film I did my own research to see exactly how accurate this tale was and it was both shocking and upsetting to see how much of this actually did happen to poor Richard Jewell. This film is well worth your time and I am giving, ‘Richard Jewell’ a 8/10. It is honestly astonishing that Eastwood is still directing these quality films at his age, a remarkable accomplishment.