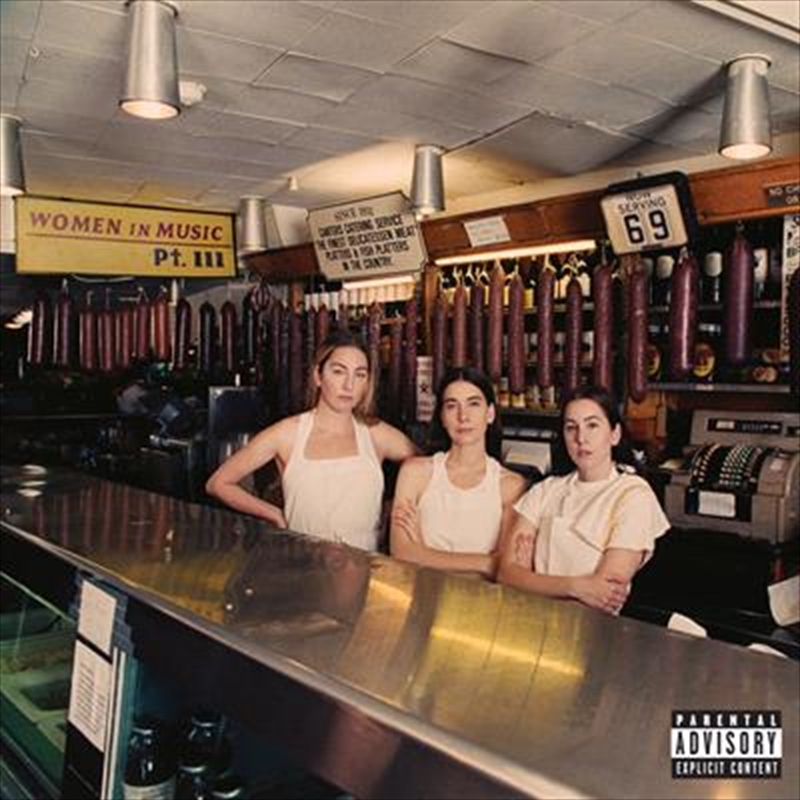 ‘Women In Music Pt. III’ is the brand new album from HAIM, produced by Danielle Haim, Ariel Rechtshaid and Rostam Batmanglij. The album includes the current hit single ‘The Steps’.

Over the past seven years Haim have delivered a whole lot of sun-soaked vibes through their guitar-riff led sound. Aesthetically drawing a connection to the West Coast, their production has always felt warm, playful and retrospectively honest. But with the release of their third studio album ‘Women In Music Pt III’ the sister trio have stepped into a whole new light as they hone their sound to be a little more direct and centred.
Intended to be listened to from start to finish, this album is the embodiment of a moment in time with the honest contrast of light and shade. With Danielle Haim opening up about her struggles with mental health, there is distinct highs and lows throughout the record. And the production is less ear-worm pop focused except for ‘The Steps’ and ‘Now I’m In it’, which are big songs in their own right. instead, this album is a little minimalist in comparison and is altogether more cohesive with the sonical direction.
Opening with ‘Los Angeles’, this ode to the West Coast is immediately aesthetically pleasing as the saxophone introduction oozes into this coastal production and “doot-do-do” vocals. Contrastingly then closing the album with ‘Summer Girl’, they bring it back to this same production and give you a fresh perspective as they say goodbye to this album with that imagery fresh in your mind.
In between those distinct tracks, they elaborate on that sound and create some chilled out garage infused alt-pop moments like ‘Up From A Dream’, ‘Gasoline’, ‘Don’t Wanna’ and ‘Another Try’.
‘I Know Alone’ is an immediate standout for many reasons, but one of it’s key likabilities is its honest and direct lyrical approach. Reflecting on Danielle’s deepest spiral of loneliness that had her feeling like she had experienced loneliness worse than anyone else, you hear her pain and heart shining through rawly.
Taking a mellow approach with a glitchy and echoey vocal take that glides into a groovy bass riff in the chorus, there is still that signature Haim attitude gripping on.
‘3AM’ is another clear standout for a different reason. The experimental layering of the production hears them delivering a West Coast hip-hop inspired pop moment. It’s good a unique rhythmic groove to it that is full of nostalgia and gives the trio their TLC meets Destiny’s Child moment without sacrificing their artistic vision.
Layering is very important on this album, and they’ve successfully managed to deliver something that is cohesive, but still tackles a variety of different directions. It’s an album that you can play from start to finish and just get lost in the West Coast imagery it lays out for you.