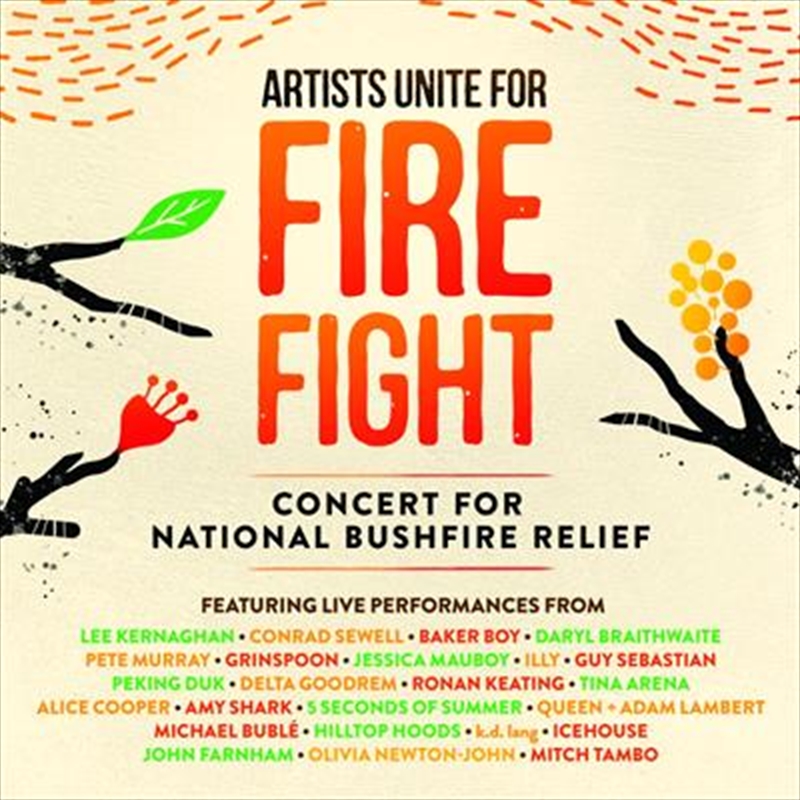 On February 16 some of the greatest local & international artists gathered at ANZ Stadium Sydney for an event that captured the nation. With a live audience of 75,000 people and a TV audience in excess of 2 million Fire Fight Australia has since raised over $10 million to date!

Artists Unite For Fire Fight is an incredibly special album, featuring LIVE performances from EVERY artist / band on the day (in order of appearance). Sony Music Entertainment Australia will donate all its proceeds from the sale of this album to Sony Foundation Australia and funds raised will go towards directly supporting young Australians in bushfire affected communities.

Review of Artists Unite For Fire Fight by Thomas Bleach

The 2019/2020 Summer was one that Australians will always remember, and not for the reasons that they have had wished. It became one of the most devastating bushfire seasons recorded with over 18.6 million hectares burnt, 5900+ buildings destroyed including over 2700 homes, one billion animals killed and 34 people killed. The statistics speak for themselves.
With the music industry banding together to provide aide in this hard time, fundraiser shows and exclusive merch drops quickly started to pop up from every artist that could lend a hand in this trying time.
With the love being felt throughout the country, Fire Fight Australia was announced through TEG Dainty and TEG Live to provide an exclusive SOLD OUT show in Sydney at ANZ Stadium to further raise money for those affected by these devastating bushfires.
With acts ranging from Queen + Adam Lambert to 5 Seconds Of Summer, K.d. Lang, Alice Cooper, Michael Buble, Delta Goodrem, Guy Sebastian, John Farnham and Icehouse, the star studded line up provided a day/night of relief and pure entertainment.
To further provide aide to those affected, Sony Music Entertainment Australia have released the ‘Artists Unite For Fire Fight: Concert For National Bushfire Relief’ album. The 23 track collection provides an audio snapshot of the epic inclusive variety the event offered and the euphoric energy that inhabited the stadium on that day.
The album is available now in store from Sanity. All proceeds will be donated to Sony Foundation Australia to support young Australians in Bushfire affected communities.
Everyone involved with the production, distribution and selling of this record have donated their time and resources to make sure that all proceeds are donated to the foundation, as well as all of the artist royalties from this recording.
The 23 tracks selected to create this record have some of the most anthemic moments from the day. With Amy Shark’s ‘I Said Hi’ euphorically telling the world that Australia says hi and thank you for all the support that has been given, to the collective unison of John Farnham’s ‘You’re The Voice’ with Olivia Newton-John, Mitch Tambo and Brian May which keeps the hope alive.
This is yet another incredible way to continue to support Australia through the rehabilitation process that the affected areas are currently going through. And it’s a enjoyable way or reliving the beautiful uniting that Australia and some world class performers did.

4.Daryl Braithwaite – As The Days Go By

9.Guy Sebastian – Before I Go

1.Ronan Keating – When You Say Nothing At All

7.Michael Bublé – Such A Night

10.ICEHOUSE with Special Guests William Barton & Evan Davies – We Can Get Together