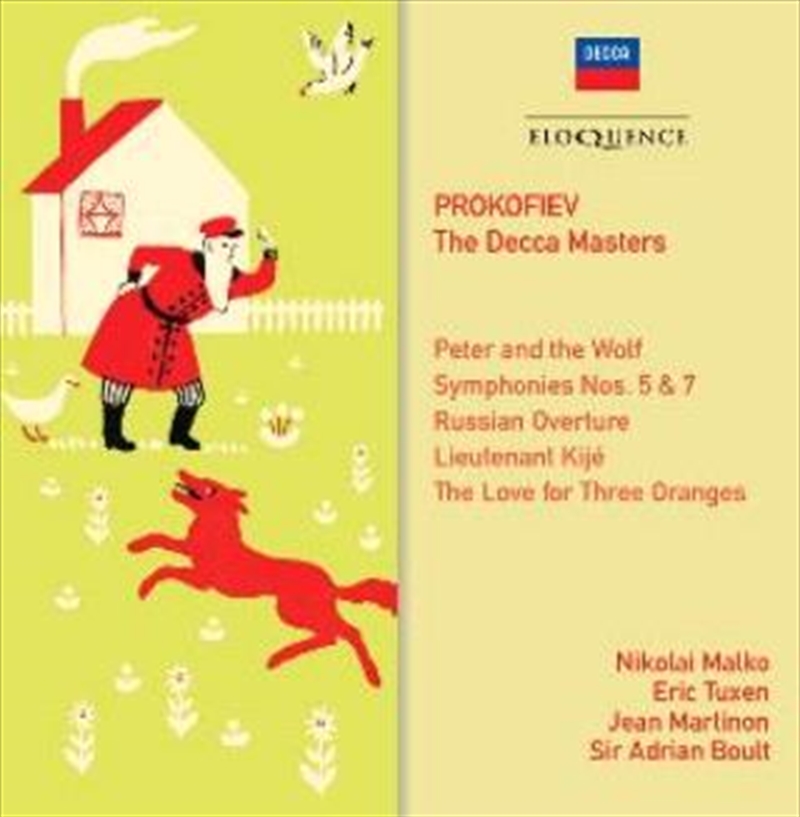 A kaleidoscopic collection of orchestral Prokofiev in the 1950s, as recorded by Decca engineers in London, Paris and Copenhagen, featuring both rarities and classics.

Once upon a time Peter and the Wolf was the best known of them, with six recordings to its credit in the days before LP. On this Kingsway Hall recording from 1949, the BBC announcer Frank Phillips told the story, with the experienced Prokofiev conductor Nikolai Malko making a rare appearance on Decca. Nowadays the Fifth Symphony is far more frequently heard in concert; this taut and thrilling 1952 account is the work of the Danish conductor Erik Tuxen, a legendary interpreter of Sibelius and his fellow countryman Nielsen.

Three years later in June 1955, Sir Adrian Boult made his first stereo recording, of the Love for Three Oranges Suite with the Paris Conservatoire Orchestra. This was originally issued in mono with the Lieutenant Kijé Suite played by the LPO because the latter recording was mono only – whereas the present reissue now presents Oranges in its stereo version. Boult’s dry wit points up the sardonic qualities of both suites.

Despite its title, Russian Overture from 1936 does not straightforwardly conform to principles of Soviet nationalism in music with its abrupt cuts from comic capers to sweeping Russian melody. Written like so much of Prokofiev’s music with tongue in cheek, it makes an apt companion on disc for his final symphony, the Seventh. These were recorded in November 1957 (and originally issued on the RCA ‘Living Stereo’ label) by the Paris Conservatoire Orchestra conducted by Jean Martinon, who had done much to promote the conductor’s music outside his Russian homeland. The Seventh is a deceptively simple work, imbued with a melancholy and nostalgia somewhat obscured by the ‘fake’ ending contrived to the symphony for it to win official approval (and which is played here).