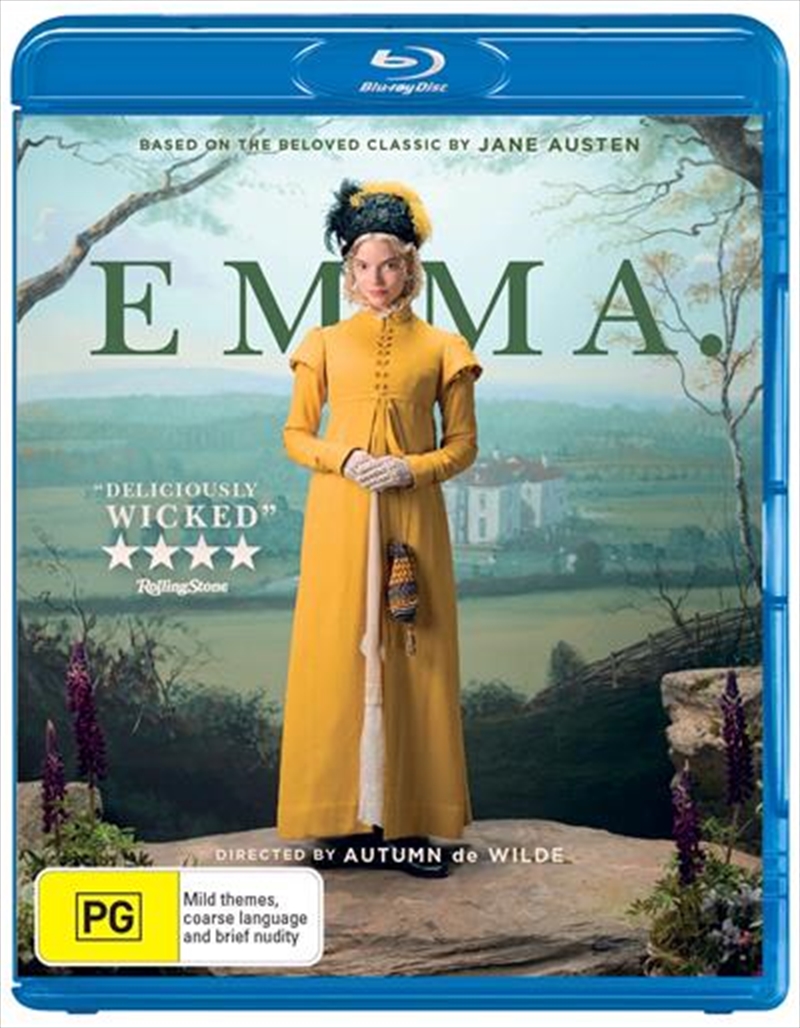 In 1800s England, a well meaning but selfish young woman meddles in the love lives of her friends.

Review of Emma by Christopher Pattison

Yet another victim of a shortened theatrical release due to COVID-19, ‘Emma’ came and went in theatres only playing to a handful of audiences across the globe. Based on the Jane Austin novel of the same name, ‘Emma’ is a period comedy that tells the tale of Emma Woodhouse (played by Anya Taylor-Joy), a well-mannered, well-intentioned young woman, who meddles in the love lives of her close friends, set to the backdrop of 1800’s England. This film was simply delightful. It had great performances with Anya Taylor-Joy proving once again that she is a wonderful actress and capable of delivering strong and magnetic performances. She shines here as Emma, hitting great comedic beats whilst also staying true to the character. The production and set design is gorgeous as well, feeling very authentic to the time period portrayed. The costuming was also very impressive with the film using bright colours to compliment the production design as well. Director Autumn de Wilde has an obvious love and appreciation for the source material, with real time, effort and passion put into each and every shot, to make the film feel authentic and genuine to the time period, whilst also hitting every comedic beat as well with gusto. The cinematography is gorgeous as well, with lovely vibrant lighting captured with unique shot composition. Director of photography Christopher Blauvelt (DOP for ‘Mid 90s’ & ‘Don’t Worry he Won’t Get far on Foot’) does a marvellous job of capturing the setting and the feel for the period, which paints the film in a beautiful light. ‘Emma’ was a wonderful surprise, filled with great period drama and comedy, wonderful performances and rich costume and production design. I really enjoyed this film and would highly recommend it to audiences wanting a light-hearted comedy with a twist. Even if you are not a fan of Jane Austin’s work, I feel there is still something that you will get out of it. I am giving ‘Emma’ a 7.5/10. Pick this one up on Blu-Ray and DVD today!

Set in England in the 1800s, we follow a young woman named Emma (Anya Taylor-Joy) who seems to take pleasure in messing around with the lives of her close friends, particularly when it comes to love and relationships. While her intentions may seem positive on her end, we witness that Emma, as a character, is quite a selfish person.
Emma lives with her father, Mr Woodhouse (Bill Nighy), and it is obvious her family is rather wealthy. Emma encounters many people within her community including her brother-in-law, Mr Knightley (Johnny Flynn), who enjoys visiting Emma and her family. Mr Knightley is a true gentleman as he provides support and guidance for both Emma and her family. Emma does not always take pleasure in being around Mr Knightley's presence, and the two share the odd disagreement from time to time.
I must confess that before watching this film, I was slightly unfamiliar with the story of Emma. I have never read the novel by Jane Austin or seen any other film adaptions of Emma. I was going into this film quite blind and unaware of the film's general plot and ending.
The visuals of Emma are tremendous. Every image on the screen is beautiful, bright, and stunning to see. Based on the image quality alone, I am surprised to see this film not get a 4K UHD release. Complimenting the film's visuals is a solid soundtrack which is a perfect match for each situation Emma finds herself in. It feels upbeat, fun, and quirky.
For this film review, I watched this film twice. One of the reasons for this is that on my first watch I found Emma to be a rather terrible person. For me, I found her to be mean and hot-headed. This is a real credit to the performance by Anya Taylor-Joy who plays Emma. To clarify, Emma is not a mean person throughout the entire film but simply has lots to learn when it comes to friendship and love.
The transition and personal journey Emma ends up taking is a rather pleasant one, and I'm thankful to say the character became more likeable as the film progressed. My second re-watch was to make sure I did not view Emma too negatively as a character before writing this review. Those who know the story in advance will not find this to be a problem at all. Speaking of performances, I must also give a shout out for Bill Nighy, who brings a nice touch of comedy as Mr Woodhouse.
Overall, while I personally could not class myself as a hardcore Jane Austin fan, I found this version of Emma to be rather pleasing. I found performances here to be most undoubtedly pleasing, but also the audio and visuals are incredibly strong. Jane Austin fan or not, if you are seeking a touching (and yet witty) romantic comedy, this is a film for you.
Peter has written this movie review for Sanity. See more from Peter here