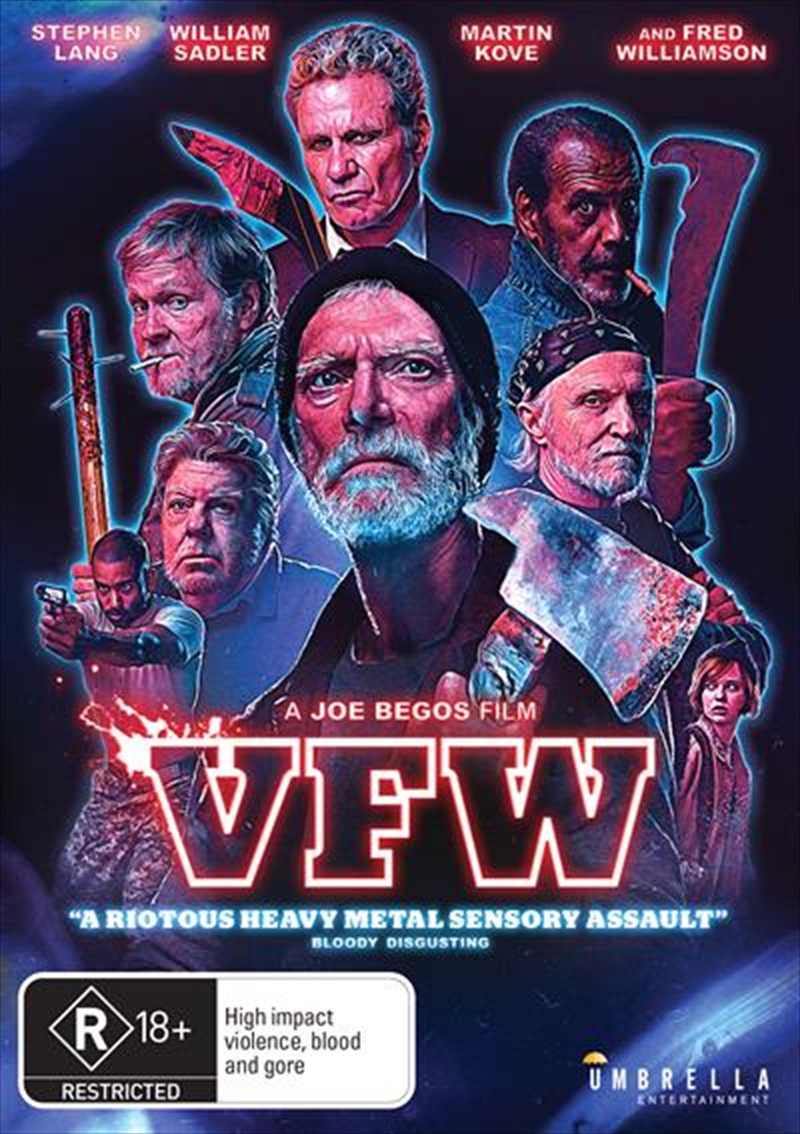 A typical night for a group of war veterans at the local VFW turns into an all-out battle for survival when a teenage girl runs into the bar with a bag of stolen drugs. Suddenly under attack from a gang of punk mutants looking to get back what's theirs at any cost the vets use every weapon they can put together to protect the girl, and their VFW, in the biggest fight of their lives.

Review of VFW by Peter Walkden

Fred (Stephen Lang) is an old man and a ex-war veteran. Today is his birthday! He and his fellow war buddies are getting together for some heavy drinking and talking about the good old days when they were on the battlefield. They decided to meet up at a bar also known as the VFW (VFW – the Veterans of Foreign Wars). But right near the celebration, a young girl has just lost her sister to drugs. The young girl decides to take vengeance by stealing all the drugs from the man responsible for her sister’s death. The young girl becomes wanted by many drug users (as in drug users who like mutated punk) and the girl goes into the VFW bar seeking help. Soon it’s up to the old war heroes to take ground and protect the young girl.
VFW has an R18+ rating. To my surprise, this is due to both action and horror in some elements. The level of violence, blood, guts, gore and foul language was something unexpected, but it reminded me of something we haven’t seen since From Dusk Till Dawn.
But what makes VFW different as a film are the multiple details that only gave me joy. The cast members are a prime element. Actor Stephen Lang is also joined by William Sadler, Fred Williamson, Martin Kove and other favourite old school actors. The outcome for each of their characters (except for one of them) are all unexpected and unpredictable. The interaction between all cast members is fun, light-hearted, and rather humorous as they band together for the fight of their lives using whatever they find within the old bar.
The soundtrack also gets a big thumbs up. Like something we have heard in a John Carpenter film, this soundtrack brings a funky, synth sounding musical score which is fantastic and adds a great touch. Even the filming style of VFW feels like an old and dirty film which gives a true 80s type of vibe… and I do love the 80s.
Overall, VFW is loaded with lots of good brainless entertainment. The action, violence, gore, humour, general 80s vibe and a fun synth soundtrack all add up to enjoyment. This film is simply a guilty pleasure and I had lots of fun viewing it. Any negatives I have are minor and generally forgiven.