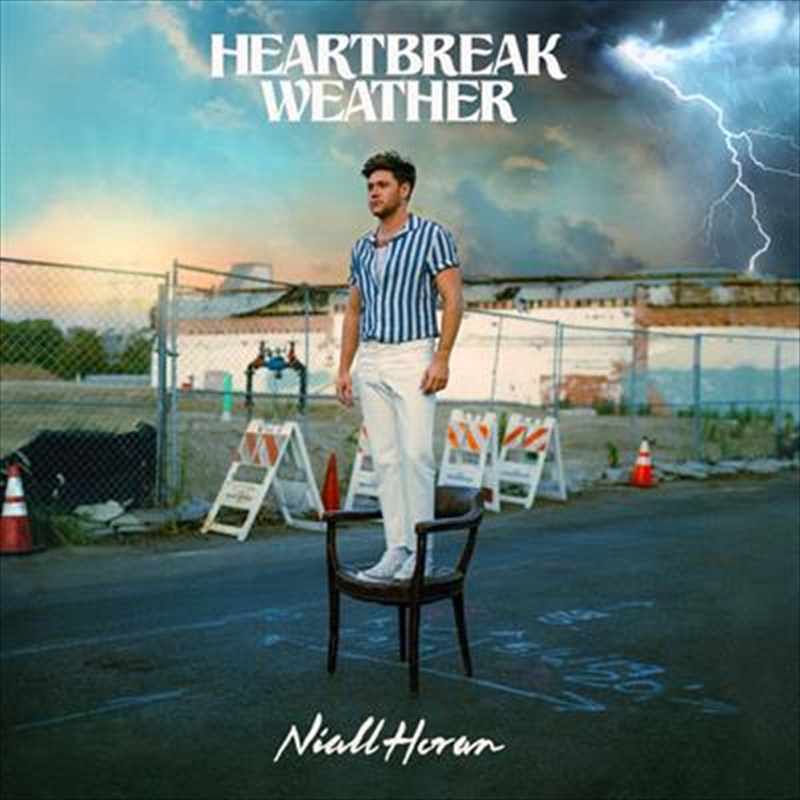 Niall Horan returns with his solo sophomore album ‘Heartbreak Weather’, following the huge success of his debut album ‘Flicker’. ‘Flicker’ peaked at #2 in the Australian ARIA charts, with the album being certified gold.

‘Heartbreak Weather’ looks set to continue Niall’s success, with the album including ‘Nice To Meet Ya’, ‘Put A Little Love On Me’, and more.

Taking his listeners on a cohesive explorative journey, ‘Heartbreak Weather’ is a strong collection of tracks that hears Niall Horan allowing fans to get to know him on a deeper level. These fourteen songs are a stronger collective compared to his debut ‘Flicker’ and provide a more in-depth insight to who he is as a solo artist.
Opening with the title track ‘Heartbreak Weather’, he sets the concept of the whole record by detailing the start of a relationship and sighting the issues he’s had in the past that has caused him some heartbreak. Telling the story through a pulsating pop-rock lens with a 80’s distorted vision, he brings an upbeat sonic the immediately draws the listener in and highlights his playful personality that his debut didn't seem to capture effectively.
Continuing that creative direction ‘Black And White’ provides a big potential single moment while he envisions the possibility of having a traditional wedding with someone he loves. The hook is catchy, pulsating and reminds me of One Direction’s later material.
Further experimenting with his sonic, Horan heads towards an atmospheric 80’s influence on ‘Bend The Rules’ and ’Arms Of An Angel’ before diving deeper on the pulsating synth polish of ‘Cross Your Mind’ and ‘New Angel’.
But ‘Small Talk’ is progressively one of the album’s boldest moments. Seductively crooning during the mood setting verses, he surprisingly drops a pulsating and sexy hook that will have you instantly grooving along.
Lead single ‘Nice To Meet Ya’ keeps that sex appeal rolling with a strong guitar riff which is a bit more prominent and rock directed than anything else on the record. But ‘Everywhere’ feels like a track that could do quite well at commercial radio with it’s relatable heartbreak sentiment and rush of energy that shines through the production.
Within all of these bigger sonics he does strip it all back on tracks like ‘Put A Little Love On Me’, ‘Dear Patience’, ‘Still’ and the boyband esq ‘San Francisco’, where he shows a bit more of the sonic that we heard on ‘Flicker’.
But the heart of this album is really in the experimental layers. He sounds a lot more confident as a solo artist within these songs and that’s reflected in the songwriting, vocal delivery and the layering of the production. He’s not trying to play it safe and is instead amping it up in a different way and sharing a little light through music in a dark time.