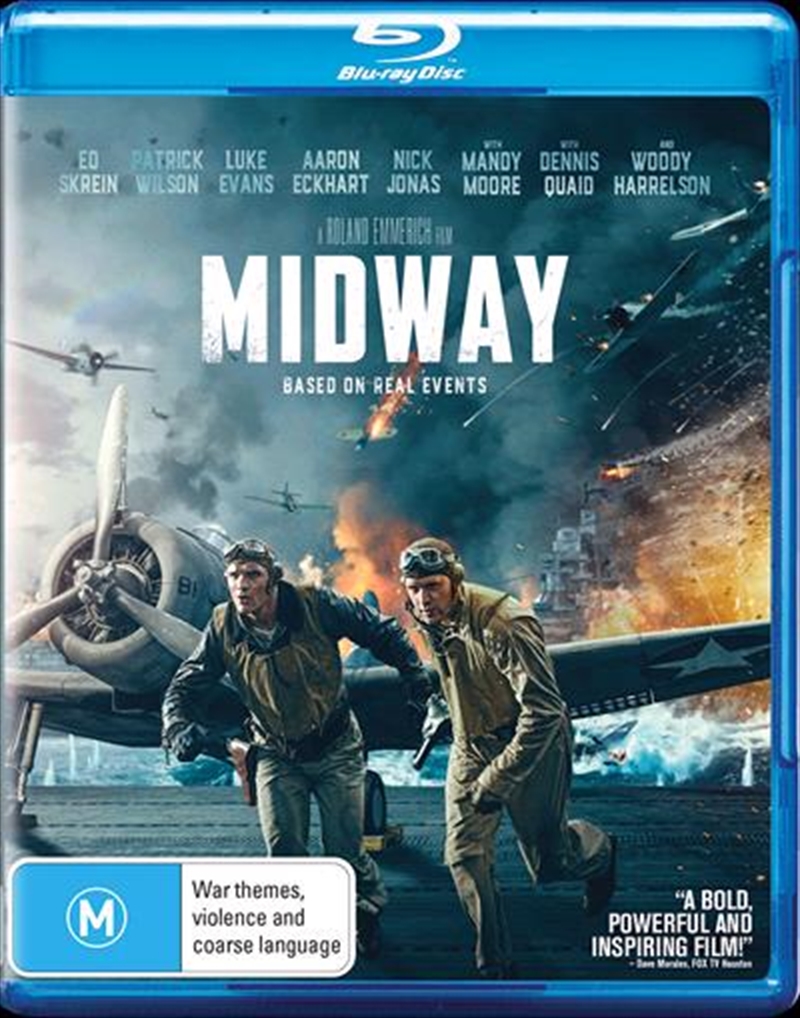 Based on real events.

MIDWAY centers on the Battle of Midway, a clash between the American fleet and the Imperial Japanese Navy which marked a pivotal turning point in the Pacific Theater during WWII. The film, based on the real-life events of this heroic feat, tells the story of the leaders and soldiers who used their instincts, fortitude and bravery to overcome the odds.

Review of Midway by Christopher Pattison

Roland Emerich has made his way in Hollywood by delivering disaster and blockbuster films of the highest order. His filmography includes: 2012, The Day After Tomorrow, Independence Day, Independence Day: Resurgence and 10, 000 BC. So what does this tell us? That Mr Roland Emerich knows his way around special effects. To see him tackle something vastly different from what we have come to expect from him was an exciting prospect. Whilst he is no stranger to large-scaled action films, he has never done a war picture. The battle of ‘Midway’, is an iconic military tale that we have heard of before in Michael Bay’s ‘Pearl Harbour’ and throughout history, but never has this iconic military feud been captured on the big screen. So I was intrigued to see the events that came after the Pearl Harbour conflict and boy did this film deliver. Midway is an energetic and action-fuelled recount of the events of Midway that is told from two perspectives; the Japanese and the Americans. Whilst the film does favour the American perspective for a majority of the film, we still understand the Japanese side of events as well with a great sequence involving the sinking of their own ships. The film replays the events of Pearl Harbour but with updated special FX and through a different point of view. The CGI is nowhere near as good as some of Emerich’s other work, but it is still impressive and the scene is only brief to re-establish the stakes and the conflict leading up to ‘Midway’. The film also boasts an impressive cast including the likes of Ed Skrein, Patrick Wilson, Woody Harrelson, Nick Jonas and Aaron Eckhart. Ed Skrein for my liking steals the show, he is a likable on-screen presence and does the real-life hero justice with his performance. We have seen similar films before, dealing with similar issues, similar themes and familiar stories, but the passion and the dedication from in front of and behind the camera, make Midway an enjoyable and touching war tale albeit familiar. Midway - it's definitely one to check out on Blu-Ray!