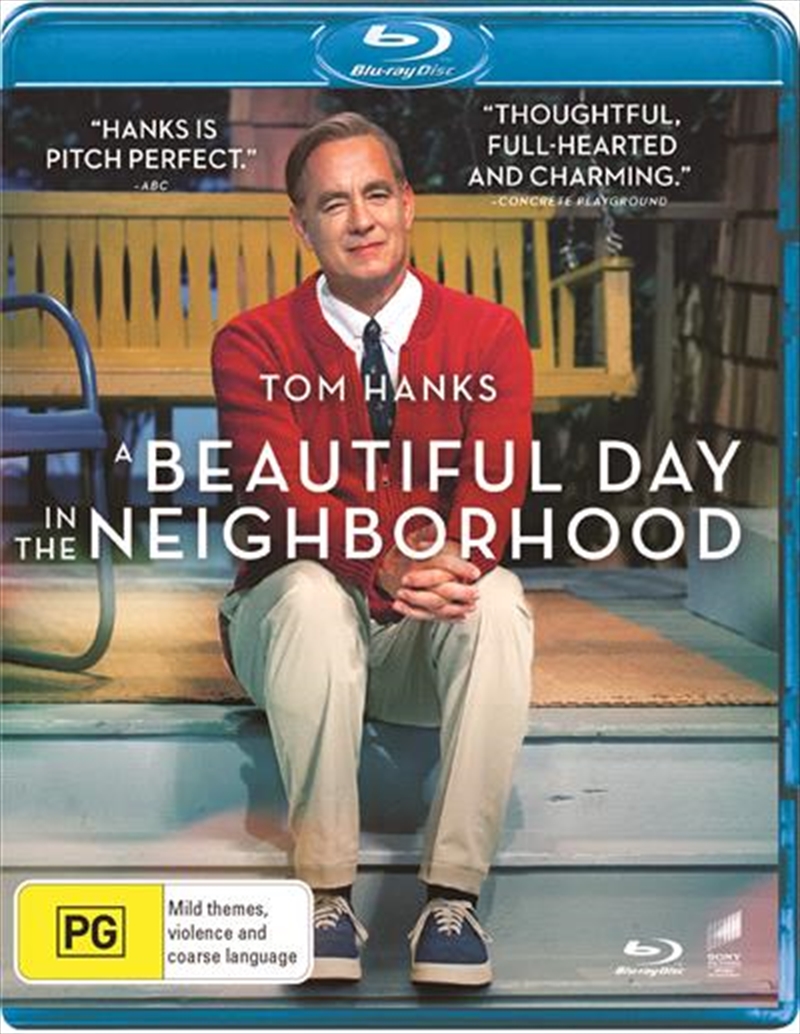 Beautiful Day In The Neighbourhood

A Beautiful Day In The Neighborhood Blu-Ray

We Could All Use a Little Kindness

Based on the true story of a real-life friendship between Fred Rogers and journalist Tom Junod. An award-winning cynical journalist, Lloyd Vogel, begrudgingly accepts an assignment to write an Esquire profile piece on the beloved television icon Fred Rogers. After his encounter with Rogers, Vogel's perspective on life is transformed.

Review of A Beautiful Day In The Neighbourhood by Christopher Pattison

As Australians, we were not lucky enough for Mr Rogers to grace the small screen with his presence. Mr Rogers is an icon of American television and was someone I wanted to learn more about after the fabulous 2018 documentary ‘Won’t You be My Neighbour?’. Tom Hanks brings Mr Rogers to life in 'A Beautiful Day In The Neighbourhood' with a beautiful and grounded portrayal of the man, delving into his personal life, his overall goal of his children’s program and his charming and optimistic view of the world we live in. Hanks steals the show here and whilst he does not have a great deal of screen time, but when he is on screen. Matthew Rhys is also magnificent in this film as well, as a fan of his work in The Americans it was great to see him tackle another role like this one, he is a great on-screen prescience balancing the drama with dry-wit. A Beautiful Day in the Neighbourhood is a charming film, with a touching and personal story balanced with the right dose of optimism and care. In times like these, this is the perfect feel good film, it makes you feel optimistic of what is to come and that soon our lives will find some form of normality sooner rather than later. I had a joyous time watching this film and I feel as if though this will be once to throw on when you are feeling a little down.

Review of A Beautiful Day In The Neighborhood by Peter Walkden

Based on a true story.
Set in the 90s Mr Rogers aka Fred Rogers (played by Tom Hanks) is the host of his own TV show titled "Mister Rogers' Neighbourhood". Through his show, Fred Rogers had the desire to share positive messages, particularly with young children. Some of these messages include challenging worldly topics such as divorce, racism and bullying. The techniques he used on television were unlike anything else for its time.
On the flip side of this story, we have a man named Lloyd Vogel. Lloyd is a professional journalist who receives an assignment to write about the well-known Mr Rogers, leading to him conducting several interviews. While Mr Rogers is known as a heart-warming man to many, Lloyd suspects that perhaps Mr Rogers is just a good actor who fakes his passion for others.
Performances here are outstanding, particularly from Tom Hanks who plays Mr Rogers. I'm amazed at just how good a job he does at playing this lovable man.
Overall, this is truly a wonderful film. The sets, costumes and plot are all excellent, communicating the story in a beautiful way. This film tells a true story that is a must-watch and at its core is a positive message that will impact and challenge many. Tom Hanks is outstanding as he brings to life a man who impacted the world. I also highly recommend the documentary "Won't You Be My Neighbor?" from 2018, which also impacted me in a major way.

Title: A Beautiful Day In The Neighborhood