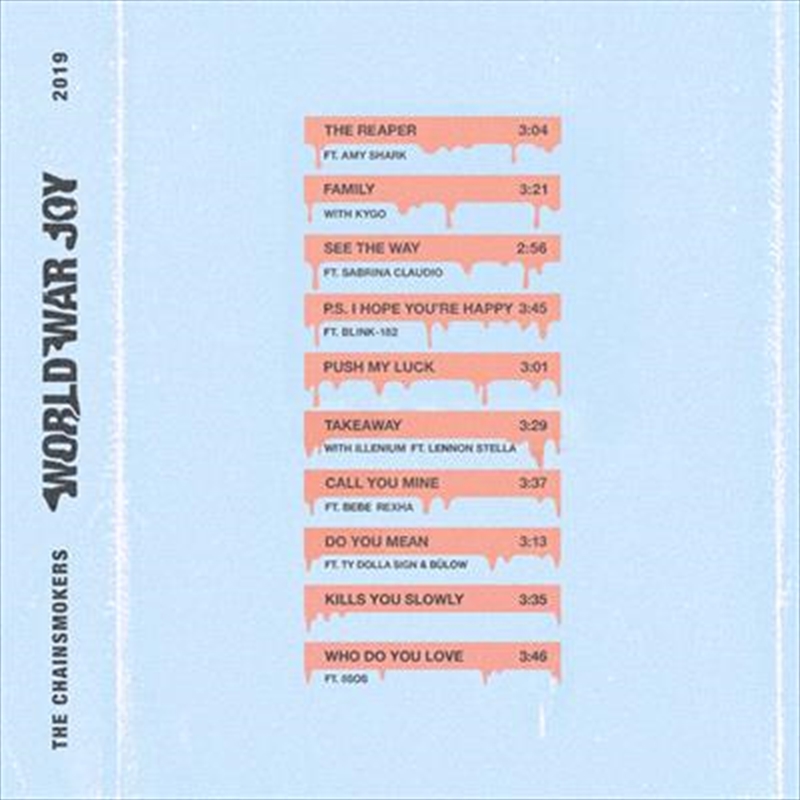 SEE MORE IN:
Under $15 Music The Chainsmokers
DESCRIPTION

The Chainsmokers have incredible achievements in Australia including GOLD, PLATINUM and MULTI-PLATINUM status across a number of releases, including 2016’s smash hit ‘Closer’ feat. Halsey, which is certified 16x Platinum and was named the longest running #1 ARIA single for that year.

Review of The Chainsmokers - World War Joy by Thomas Bleach

The Chainsmokers journey has been a wildly exciting one so far, and while they’ve filtered themselves through a pop lens, their new record ‘World War Joy’ is their most experimental and genre pushing collection yet. Recent singles ‘Who Do You Love’, ‘Kills You Slowly’, ‘Do You Mean’, ‘Call You Mine’, Takeaway’ and ‘Push my Luck’ lead the way but there are a few new hidden gems that will have listeners more than impressed. ‘The Reaper’ featuring Australia’s Amy Shark is a collaboration you didn’t know you needed to have in your life. This is the perfect example of how collaboration should be occur. Fusing their two unique and distinct sounds together, they push each other to create something unique and memorable. With soothing harmonies and dark EDM pop beats leading the way, you will be immediately drawn into this interesting sonic with it’s gritty breakdowns and vocal riffs. From there ‘Family’ featuring Kygo is more country-pop influenced which has commercial radio potential while the soothing ‘See The Way’ featuring Sabrina Claudio is commercial pop with an experimental breakdown. Then you’ve got another unexpected collaboration which will leave you feeling nostalgically happy. ‘P.S. I Hope You’re Happy’ featuring Blink 182 is the perfect ego EDM crossover. And it’s exactly how you’d imagine it. Drums and guitars with EDM production layered over with the right balance. With this album they’ve really proved that they won’t be boxed in to commercial trends or trying to immolate pass successes. Instead they are just making music they want to make with the artists they want to collaborate with. They also haven’t tried to over do it. with only 10 songs in the track listing, they keep the impact at a maximum high. It’s punchy and memorable which is the way you want it to be.

7. Call You Mine ft. Bebe Rexha