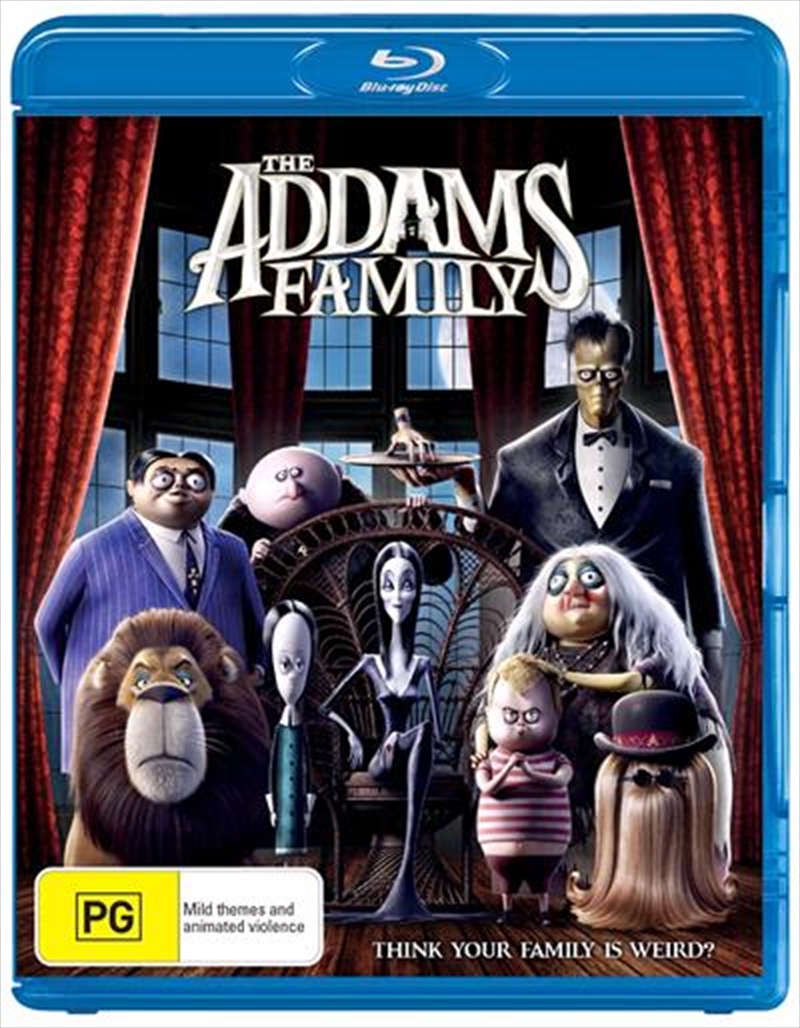 The eccentrically macabre family moves to a bland suburb where Wednesday Addams' friendship with the daughter of a hostile and conformist local reality show host exacerbates conflict between the families.

Review of The Addams Family by Peter Walkden

Introducing the most eccentric group of people, you will ever see on screen. They are famously known as The Addams Family. This is the first time we have seen this family in a cartoon animation feature. The film opens with a backstory as we witness the wedding of Gomez Addams (Oscar Issac) & Morticia (Charlize Theron). During their ceremony, they are interrupted by the people from the town demanding they leave their community. You see Gomez and Morticia are very different. The type of behaviour one might see from a member of The Addams family can be classed as scary and frighting.
So, with the community pushing out The Addams Family far away, Gomez and Morticia decide to move far away where they can be left alone in peace. They soon discover an abandoned insane asylum located on top of a mountain. The abandoned property is dark, cold and an evil presence lurks within. Feeling right at home, they decide it is the perfect place to start a new family.
Fast forward to the present day, and the family now have two children- Wednesday (Chloe Grace Moretz) and Pugsley (Finn Wolfhard). Life for Addams Family seems perfect until a few surprises come their way. Within the community, a famous house designer and renovator, Margaux Needler (Allison Janney), is selling homes and growing the area. Unfortunately for her, people are not interested in purchasing luxury homes where they can catch a glimpse of The Addams Family mansion on top of a mountain. Now Margaux will do whatever it takes to fix this little problem of hers. On top of that, Wednesday Addams begins to question what life would be like if she went outside, made a friend, or attended a school like everyone else.
Growing up, I have always been a fan of The Addams Family, particularly the two motion picture features that arrived in cinemas back in 1991 & 1993. I also recall being glued to my Nintendo playing The Addams Family video game which I loved with all my heart. When I first heard about this animation in development, I welcomed it because it felt so long since we had any type Addams Family feature film.
The voice work found within The Addams Family film was great. I partially enjoyed Oscar Isaac as Gomez. He delivers countless one-liners and over the top dad Jokes. The chemistry between him and actress Charlize Theron was also humorous throughout the film. I was also surprised to find actress Bette Midler provided the voice over for the Grandma Addams, which I felt was also fun and fitting.
As a plot, for the most part, the film is rather pleasing. I enjoyed seeing key elements such as witnessing the marriage of our lead characters, and sometimes the film greets its viewers with flashbacks.
Overall, I had a lovely time revisiting the creepy and spooky Addams Family. The animation itself feels familiar, and then the film attempts to introduce new jokes and gags which we have not seen before.
Peter has written this movie review for Sanity. See more from Peter here

Review of The Addams Family by Christopher Pattison

‘The Addams Family’ has become a staple of pop culture. Even if you are not familiar with the original television series or the films from the 1990’s, there is a strong chance that you can still hum the theme. As you read this review, I can almost guarantee that you are humming and snapping along. In 2019, we received a new instalment in the long-dormant franchise which came to be a surprise hit for the studio. Directed by Greg Tiernan and Conrad Vernon and starring Oscar Isaac, Chloe Grace Moretz, Finn Wolfhard, Snoop Dogg, Martin Short, Catherine O’Hara and Bette Midler (yeah, it’s one hell of a cast). This 2019 reboot follows the eccentric ‘Addams Family', who move to the bland suburb where Wednesday Addams’ (played by Chloe Grace Moretz) friendship with a hostile and conformist local reality show host creates conflict between the two families. So, is there room in the modern-day popular culture arsenal for ‘The Addams Family’, or should these characters remain a piece of nostalgia?
‘The Addams Family’, whilst treading familiar ground, does create a new world for these characters, bringing them into the modern era with stunning animation and an impressive voice cast. The animation here feels vastly different from anything else from major animation studios such as; Pixar, Dreamworks and Illumination. It has a unique movement and style we have not seen before; Metro Goldwyn Mayer have now entered the animation game with a strong first entry. The voice cast here is also wonderful. Chloe Grace Moretz is perfectly cast as Wednesday Addams, if this film was a live-action adaptation I could also see her fitting into this role. Oscar Isaac as Gomez Addams was also very well cast alongside Charlize Theron as Morticia Addams. These two are the standouts for me in the film. The film's colourful setting provides for some creative and different set pieces. It is nice to see this world brought to life again and it definitely bought back some nostalgia for me.
‘The Addams Family’ does follow familiar genre conventions and does re-tread familiar territory with these characters, but the stylish animation and stellar voice cast really do elevate 2019’s ‘The Addams Family’ to new heights. I am looking forward to more adventures in this new animated world. I am giving the 2019 ‘Addams Family’ reboot a 7/10. I would highly recommend this one for all ages, if you were a fan of ‘the Addams Family’ growing up, or you want a new colourful animated adventure for the young ones, then this one will suit. Pick ‘The Addams Family’ up on DVD and Blu-Ray today!
Chris has written this movie review for Sanity. See more from Chris here