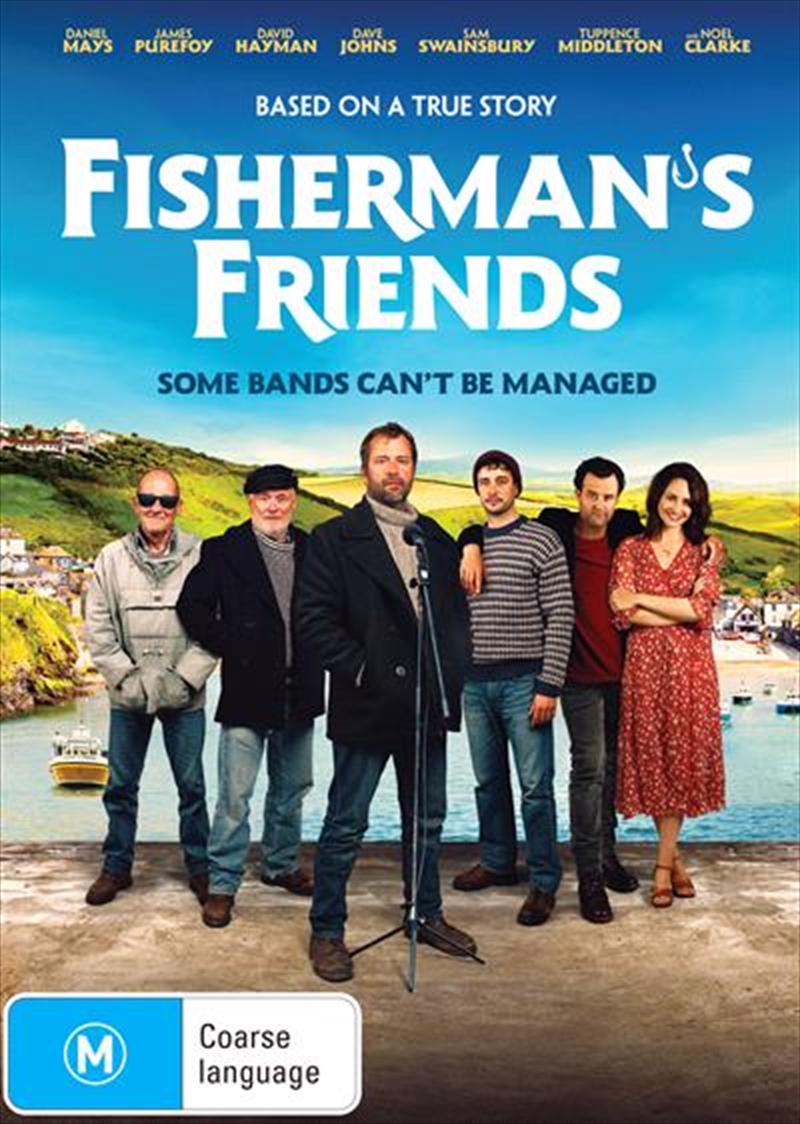 Inspired by a true story, Fishermans Friends tells the heartwarming tale of a Cornish all-male group that go from singing sea shanties to shooting up the charts. Taken by their performances, music manager Danny takes a punt on this amateur outfit, made up of hardy fishermen and lifeboat volunteers. As he vows to turn this crew into the worlds oldest buoy band, he finds more than a good record deal. When you open your heart, life, love and friendship can play the most harmonious tune.

Review of Fisherman’s Friends by Eddie @ The Movie Guys

Based on a genuinely smile-inducing true story, small-scale British film Fisherman’s Friends is the type of sufficiently delivered cinematic offering that knows exactly what it is and sticks to its formula throughout, as you’re likely to walk away from a screening tapping your feet and poorly reciting sea shanties long into the night. Absolutely British through and through, Friends Hollywoodizes the story of well-known U.K folk/shanty group Fisherman’s Friends, who against all the odds graduated from playing gigs to locals in Cornwall pubs to becoming one of the most successful performing groups on the British charts and in live performances. It’s a feel-good film, one with all the tried and true tropes of the genre that have been there since the dawn of cinema but director Chris Foggin never lets things get too mawkish or unbearable as he instead, with help from his likeable group of on screen rogues, ensures that you can’t help but enjoy the simple delights of this against the odds true life tale. Led by the as per usual gruff and raw James Purefoy as the groups rugged leader Jim and the likeable Daniel Mays as big-shot London record label worker Danny, Friend’s loaded ensemble all acquit themselves well and while there are too many players to get to know well and a tacked on romance that isn’t overly necessary between Danny and Tuppence Middleton’s Alwyn, it’s not enough to detour from the joys Friends has install throughout its runtime. From early morning shanty singalongs out on the bay of the seaside setting, pub set group shenanigans and some heart-warming moments of loss, love and reflection, Friends does a great job of being more than just a loveable comedy as it touches on some important themes and ideas around its more fun and frivolous shanty-filled world. It never threatens to transcend into anything greater than a really enjoyable good time, one that will not stick with you for the long-haul, but with such a lightness of touch and with its heart well and truly in the right place, Friends is one of the most purely enjoyable films of its type to be found in recent years, and a film that will likely be discovered and enjoyed more in the coming years after its low-key initial run. Final Say – You don’t have to be a sea shanty singing sailor to have a great time with Fisherman’s Friends, a likeable and fun true life tale that is the perfect antidote to a hard day at the office. See more from The Movie Guys on their website
TRAILER
DETAILS