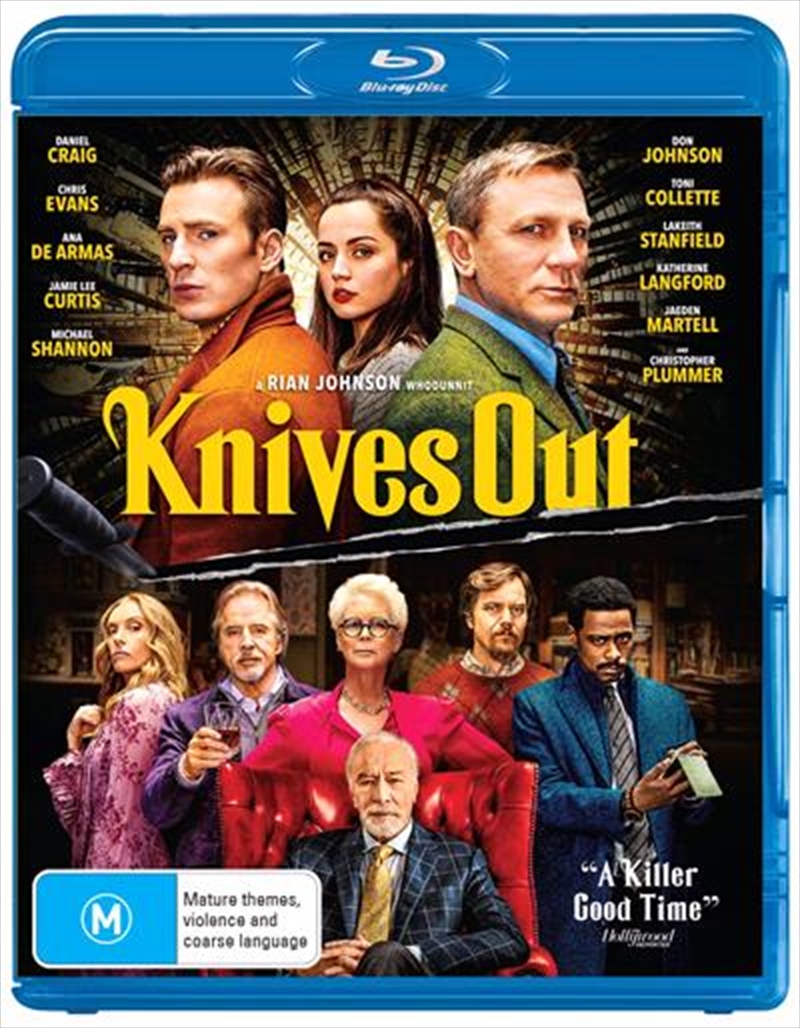 Everyone has a motive. No one has a clue.

A modern take on the classic detective genre. When renowned crime novelist Harlan Thrombey is found dead at his estate just after his 85th birthday, the inquisitive and debonair Detective Benoit Blanc is mysteriously enlisted to investigate. From Harlan's dysfunctional family to his devoted staff, Blanc sifts through a web of red herrings and self-serving lies to uncover the truth behind Harlan's untimely death.

Review of Knives Out by Christopher Pattison

Rian Johnson returns to original filmmaking with Knives Out after taking a stab at blockbuster filmmaking with Star Wars: The Last Jedi. Knives Out has one of the best ensemble casts in recent years with the likes of Daniel Craig, Lakeith Stanfield, Jamie Lee-Curtis, Chris Evans, Michael Shannon and Don’Johnson amongst the cast. Daniel Craig shines as private investigator Benoit Blanc, with a dry southern drawl that really adds to his character. He is a standout here and I look forward to more adventures with this character. Ana de Armas shines as Marta, giving a star making performance in the film. The films clever plot, well-crafted narrative and superb filmmaking, make this the perfect storm. Upon repeat viewings this film becomes even better which makes it the perfect film to purchase on Blu-Ray and 4K UHD today. I’m giving this one a massive 10/10

Review of Knives Out by Peter Walkden

Detective Benoit Blanc (Daniel Craig) is hired by a mystery person to investigate the death of well-known crime writer Harlan Thrombey (Christopher Plummer). Harlan was found dead on the night of his 85th birthday after celebrating with his close family. Now it’s up to the detective to investigate and question Harlan’s dysfunctional family to find the truth about his death.
Knives Out is a film that gets going right at the start. I say this because, at the beginning of this film, Harlan is already dead. As an audience, we gain an understanding of Harlan’s death and the events leading up to it thanks to flashbacks from each of Harlan’s family members during questioning. Speaking of Harlan’s family members, there are many of them in this film, and the actors all do an incredible job. Actors such as Jamie Lee Curtis, Toni Collette, Chris Evans and Michael Shannon are just some of the great actors who play murder suspects.
Watching the detective investigate and question each of the family members is easily one of the biggest and most entertaining elements to this film. Watching characters try to hide secrets or provide their version of the birthday dinner before Harlan’s death is simply creative and interesting to watch.
Another element I enjoyed was the overall mystery and plot. In movies today there has been a recent wave of murder mysteries, but most of these have been remakes. Thankfully Knives Out (2019) is something new and fresh. I’m also surprised at how times I found this film funny as well as sometimes suspenseful because of the mystery and characters. The pacing and movie timeline was also different instead of being just another “who done it” tale.
Visuals I also couldn’t fault. Lots of clever filming styles are used here, and there is constant and solid creativity from the director for both audio and visuals.
Overall, Knives Out is simply a film full of fun. It’s humourous, but also a serious murder mystery. Characters are great and stunning to see on screen. The murder mystery itself is also satisfying, especially if you are seeking a fresh “who done it” murder mystery. Knives Out is new, it’s fresh, it’s great.