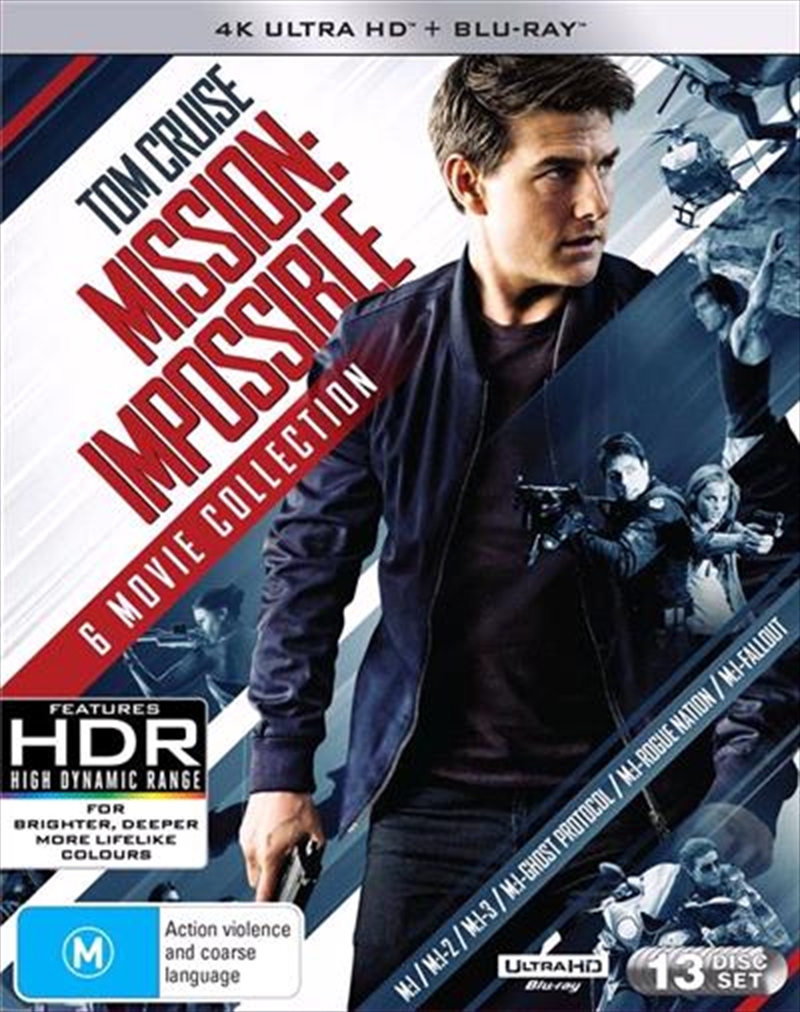 SEE MORE IN:
Mission Impossible Up To 50% Off Boxsets 4K UHD
DESCRIPTION

Mission Impossible
Tom Cruise ignites the screen in this runaway smash hit. Cruise stars as Ethan Hunt, a secret agent framed for the deaths of his espionage team. Fleeing from government assassins, breaking into the CIA's most impenetrable vault, clinging to the roof of a speeding bullet train, Hunt races like a burning fuse to stay one step ahead of his pursuers...and draw one step closer to discovering the shocking truth.

Mission Impossible 2
Tom Cruise returns as Ethan Hunt in the sequel to Mission: Impossible. How do you prevent terrorists from unleashing mayhem on the entire world? You don't. This is a job for IMF agent Ethan Hunt. The world's greatest spy returns in the movie event of the year, 'M:I-2'. Top action director John Woo brings his own brand of excitement to the mission that finds Ethan Hunt (Tom Cruise) partnering up with the beautiful Nyah Hall (Thandie Newton) to stop renegade agent Sean Ambrose (Dougray Scott) from releasing a new kind of terror on an unsuspecting world. But before the mission is complete, they'll traverse the globe and have to choose between everything they love and everything they believe in.

Mission Impossible 3
This is Mission: Impossible...like you've never seen it before! Tom Cruise stars as Ethan Hunt in this pulse-pounding thrill ride directed by J.J. Abrahms (Lost, Alias). Lured back into action by his agency superiors (Laurence Fishburne and Billy Crudup), Ethan faces his deadliest adversary yet - a sadistic weapons dealer named Owen Davian (Oscar winner Phillip Seymour Hoffman). With the support of his IMF team (Ving Rhames, Jonathan Rhys Meyers and Maggie Q), Ethan leaps into spectacular adventure from Rome to Shanghai as he races to rescue a captured agent (Keri Russell) and stop Davian from eliminating his next target: Ethan's wife, Julia (Michelle Monaghan).

Mission Impossible: Ghost Protocol
No plan. No backup. No choice. Agent Ethan Hunt (Tom Cruise) and his elite team (Jeremy Renner - Avengers and Simon Pegg - Star Trek) go underground after a bombing of the Kremlin implicates the IMF as international terrorists. While trying to clear the agency's name, the team uncovers a plot to start a nuclear war. Now, to save the world, they must use every high-tech trick in the book. The mission has never been more real, more dangerous or more impossible.

Mission Impossible: Rogue Nation
With the IMF disbanded, and Ethan (Tom Cruise) out in the cold, the team now faces off against a network of highly skilled special agents, the Syndicate. These highly trained operatives are hellbent on creating a new world order through an escalating series of terrorist attacks. Ethan gathers his team and joins forces with disavowed British agent Ilsa Faust (Rebecca Ferguson), who may or may not be a member of this rogue nation, as the group faces their most impossible mission yet.

Mission Impossible: Fallout
Ethan Hunt and the IMF team join forces with CIA assassin August Walker to prevent a disaster of epic proportions.
Arms dealer John Lark and a group of terrorists known as the Apostles plan to use three plutonium cores for a simultaneous nuclear attack on the Vatican, Jerusalem and Mecca, Saudi Arabia. When the weapons go missing, Ethan and his crew find themselves in a desperate race against time to prevent them from falling into the wrong hands.