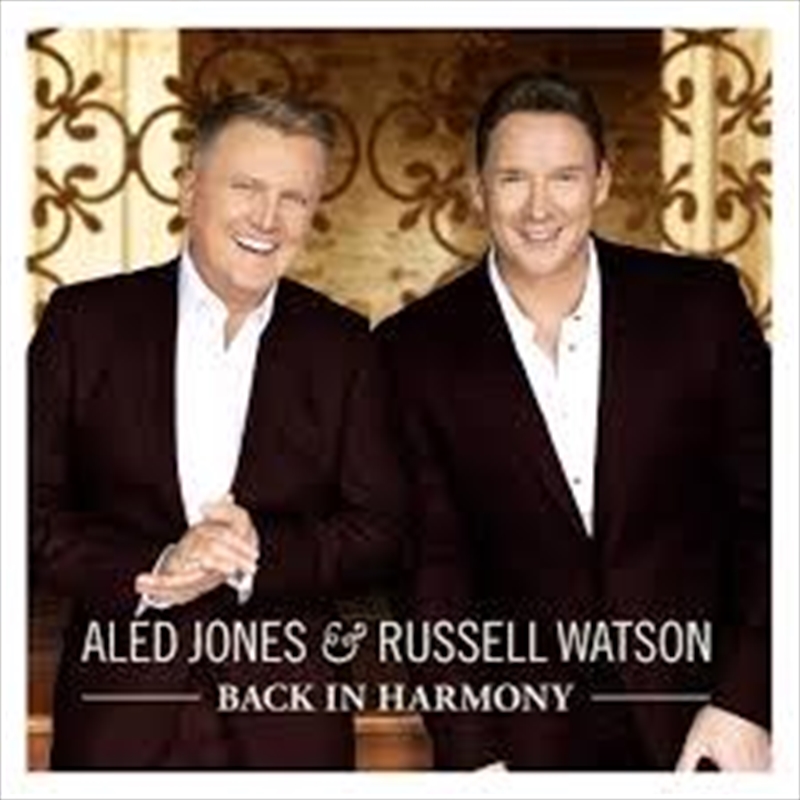 Aled Jones And Russell Watson Back In Harmony CD

Aled Jones and Russell Watson are two names that have dominated classical music over the past two decades. Last year these two luminaries united to create a duo like no other, bringing together two of the UK’s most distinctive and loved voices. The result was In Harmony, a beautiful collection of arias and classical standards that shot in to the UK Top 10 and is on the way to being certified Gold, as well as amassing over a million streams.

Now, ahead of their upcoming UK tour, Aled and Russell have once again returned to the studio with international platinum selling producer Ian Tilley to continue their joint musical journey.

In a similar spirit to their first record, they have had fun in the studio recording some of their favourite standards, popular classical songs, hymns and arias for Back In Harmony, released November 1st on BMG.

Whether it’s the pomp of Luigi Denza’s Funiculì Funiculà, the uplifting Ennio Morricone penned Nella Fantasia or The Impossible Dream from Broadway musical Man Of La Mancha the album underscores the unity of their voices and reminds us why Aled and Russell are so adored.

Other highlights within the repertoire include The Lord Is My Shepherd, Make Me A Channel Of Your Peace and The Lord Bless and Keep You. Each song holds a real meaning to both of them.

As a seasonal treat too, the album contains the Christmas classic Have Yourself A Merry Little Christmas, as well as a special medley of In The Bleak Mid Winter / O Holy Night / Hark The Herald Angels Sing.

Commenting on the new album, Aled said, “Once again teaming up with the mighty Voice - Russell Watson - has been a dream.  This album is better than I could ever have imagined.  The harmonies have been taken to another level and I’m so proud of what we’ve achieved.  There is also a fabulous mix of songs - from The Impossible Dream and Nella Fantasia to Lucky, Lucky You! I never thought I’d record that! But I love it - and adore this album. I hope you enjoy it too!”

Russell added, “After the success of our first album, I’m over the moon to be back in the studio with my good pal Aled Jones! Our follow up Back In Harmony is even bigger and better, with some real blockbuster tunes, beautifully written harmonies and wonderful orchestrations. It’s the proudest I’ve felt for a long time about a record. The production has gone to another level, Aled sounds amazing and our voices blend so well together. Thanks to everyone who has supported us so far!”

As two of the classical world’s vocal powerhouses, Aled and Russell have received countless prestigious awards, record-breaking sales and chart successes. Over his extraordinary 30-year career, Aled's outstanding performances have made smash-hit box office history. He is the original crossover star and has sung for the Pope and the Royal Family, received an MBE, released over 30 albums - with over 10 million album sales and counting - and has over 40 silver, gold and platinum discs. After beginning his career at the age of 12, Aled became one of the world’s most successful boy sopranos, releasing 12 hit albums in 4 years with the defining moment being ‘Walking in the Air’, the hit song from the family-favourite, Christmas animated film ‘The Snowman’.

As a broadcaster, Aled has forged an extensive career, having presented across BBC Radio 2 & 3 and BBC Radio Wales. Aled also hosts the Classic FM Sunday Breakfast Show and has become a popular favourite on the station and enjoyed his own show ITV Weekend.

Despite humble beginnings, Russell’s exceptional voice has led him to become one of Britain’s most popular and biggest-selling classical stars - triumphing on both sides of the Atlantic, spending fifty-two consecutive weeks at No.1 in the UK and the US classical charts at the same time. With over seven million albums sold, he has achieved six top ten albums and received four Classic BRIT Awards.

Like Aled, Russell has performed for some of the world’s most notable figures including the Royal Family, the Pope, former US presidents Bill Clinton and George W Bush, the Emperor of Japan and in front a of a worldwide audience of one billion at the opening ceremony of the Commonwealth Games in 2002.

Title: Back In Harmony

8. Make Me A Channel Of Your Peace

9. In Flanders Field (Prelude from The 49th Parallel)

10. The Loveliest Night of The Year

11. The Lord Is My Shepherd

12. The Lord Bless You and Keep You

14. Have Yourself A Merry Little Christmas