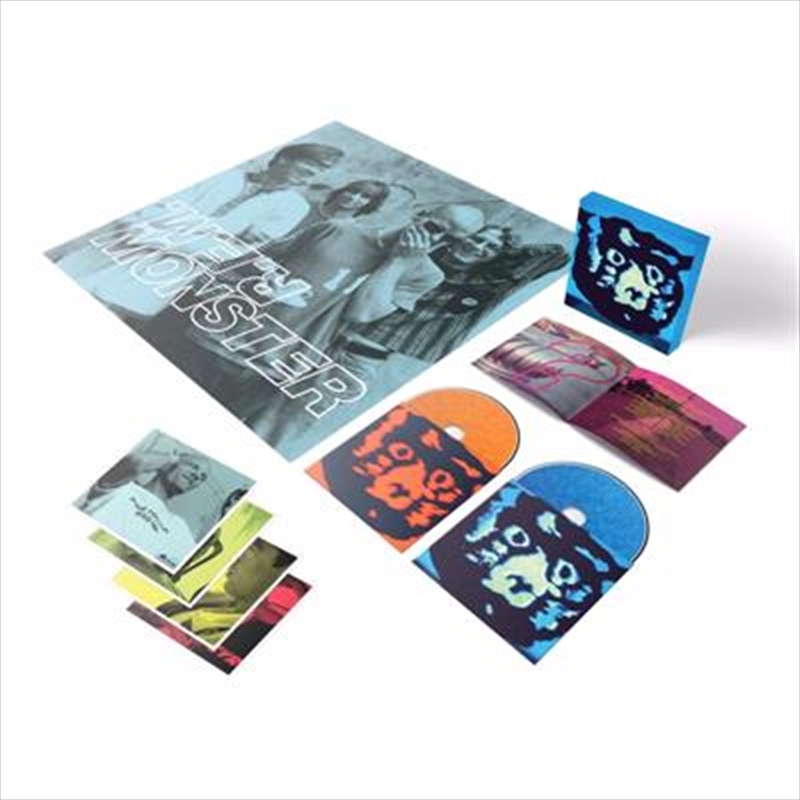 When Monster was released in September 1994, the members of R.E.M. were at a crossroads in their career. Singer Michael Stipe, guitarist Peter Buck, bassist Mike Mills and drummer Bill Berry were decompressing from the massive commercial and critical success of 1991's Out of Time and 1992's Automatic for the People. In just a few years, the Athens, GA, four-piece had become one of the biggest, most recognizable bands in the world, thanks to hits like "Losing My Religion," "Man on the Moon" and "Everybody Hurts." It had also been six years since the group had toured. By the time that work began on Monster, they were itching to end their self-imposed hiatus and get back on the road. The band was also looking for a sonic shake-up. While R.E.M.'s last two albums were full of ballads, acoustic rock songs and intricate arrangements, the group was ready to record something grittier, brasher and highly playable on stage. In his liner notes, Perpetua writes that Monster "had no precedent in the band's catalog," adding that R.E.M had "never been this distorted and dirty, or this glam or this flirty." Buck recalls, "We were trying to feel like a different band … We wanted to get away from who we were."

The group was also reeling from the strange nature of celebrity and identity, and many of the songs in this album reflect that. Perpetua notes, "There's no question that the characters on Monster are all dealing with obsession in some form or another, whether it's the infatuated narrator of 'Crush With Eyeliner,' the lovelorn protagonist of 'Strange Currencies,' or the cackling supervillain in 'I Took Your Name.'" As dark as some of the subject matter is, though, R.E.M. still infuses the songs with a dash of absurdity, irony and a humorous wink.

Highlights off the album include the distortion-soaked first single, "What's The Frequency, Kenneth?" which plays off the farce of media and marketing that pervaded Gen X pop-culture, while the catchy "Star 69" is a detective story, based on the '90s phone service of the same name (a precursor to caller ID). The second single, "Bang and Blame," features Sonic Youth's Thurston Moore, as well as actress Rain Phoenix—whose brother, River, had recently passed away and was Monster's dedicatee. "Let Me In" is an ode to Nirvana frontman Kurt Cobain, who had died by suicide just months before. Mills, who swapped his bass for Cobain's guitar on the track, shares, "It's Michael's cathartic release in response to the loss of a good friend and someone we all felt creatively aligned with."

The band's new artistic direction proved to be a hit. Monster debuted at No. 1 on the Billboard 200 and would be certified four-times Platinum in the U.S. Rolling Stone offered this praise: "R.E.M.'s exceptional pop craftsmanship, their luminous melodic inventions, their sense of mission—in short, everything fundamental—are still there and shining more brightly than ever … Monster is one urgent-sounding album, and that's as it should be." Following the release of the LP, R.E.M. embarked on a yearlong tour, headlining amphitheaters and arenas around the world. Though it was a commercially successful run, the group was plagued with significant health issues, affecting each Stipe, Mills and Berry. The band persevered and even composed and performed several new songs on that fateful Monster tour, recording much of their 1996 follow-up album, New Adventures in Hi-Fi, on the road.

In addition to having the chance to reflect on Monster, R.E.M. also had the opportunity to revisit the album creatively with their longtime producer, Scott Litt. Litt, who struggled with the original mix, recalls, "I had told the band through the years that if there was ever a chance to take another shot at mixing the album, I wanted to do it." Now, 25 years later, he's had the chance, and the results are striking. On some songs, according to Perpetua, Litt's work features "Entirely different vocal takes and instrumental parts that were either buried or excised from the original album mix." Mills adds, "I think as he listened to it over the years, he began to hear a different way to realize those songs." Ultimately, with this reissue, fans will not only have the opportunity to re-discover Monster but also, perhaps, see the album in a completely new light.

Having established a powerful legacy as one of the most enduring and essential rock bands in popular music history, R.E.M. pioneered the alt-rock movement of the '90s, influencing the likes of Nirvana, Pavement and Pearl Jam. Formed in 1980, the group enjoyed an extraordinary three-decade-long run of creative vitality and multi-platinum sales before amicably disbanding in 2011. Despite great success, the band members never lost track of their core values—remaining outspoken in their views about political, social and environmental issues, and never wavering when it came to artistic integrity. Throughout the course of their career together—an immense legacy which approaches a 40-year tenure in 2020—R.E.M. released a total of 15 studio albums, won three Grammy Awards and were inducted into the Rock and Roll Hall of Fame in 2007.