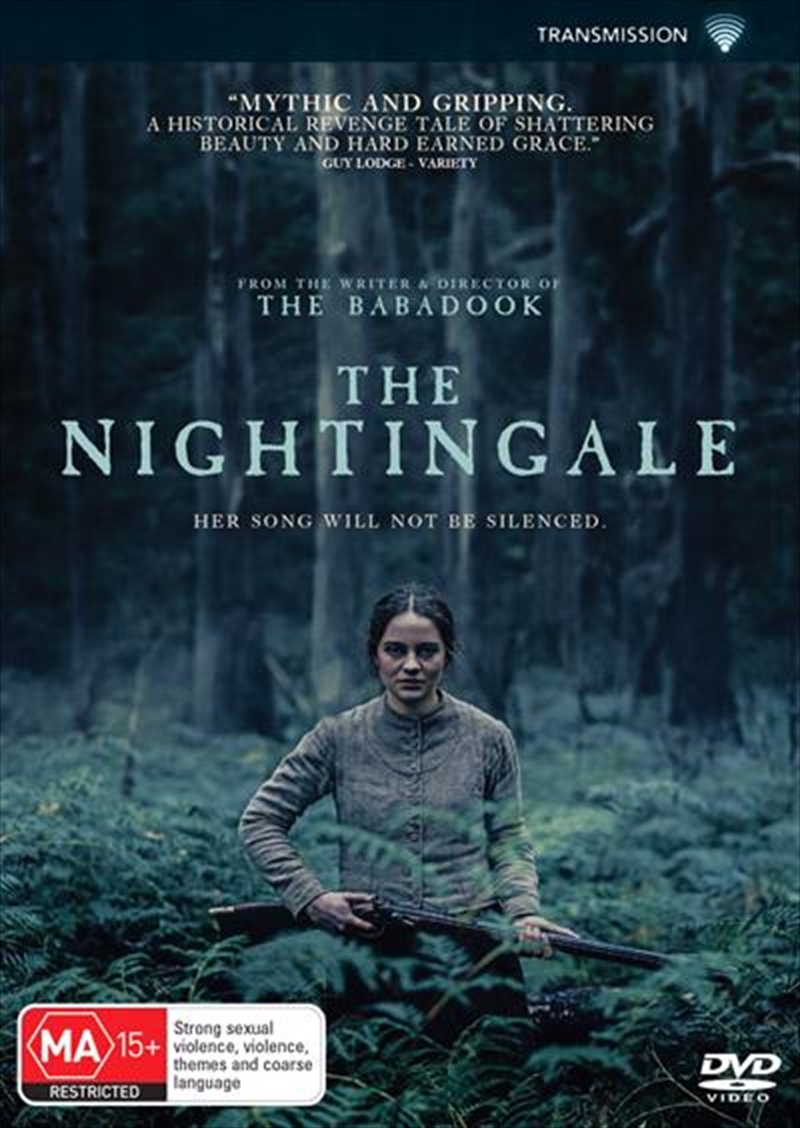 Her song will not be silenced.

Set in 1825, Clare, a young Irish convict woman, chases a British officer through the rugged Tasmanian wilderness, bent on revenge for a terrible act of violence he committed against her family. On the way she enlists the services of an Aboriginal tracker named Billy, who is also marked by trauma from his own violence filled past.

Review of The Nightingale by Eddie @ The Movie Guys


The term harrowing gets bandied about quite a bit in modern day climates, with films looking to become the next water cooler events as people discuss the horrors or look away moments that they’ve found in the latest buzzed about event, but the much talked about nature of Australian director Jennifer Kent’s latest film (of which reportedly led to many a festival screening walk-out) following on from the world-wide success of The Babadook, The Nightingale is well-warranted.
A film that features an abundance of heart-wrenching and genuinely hard to watch moments, seeped in an ominously depressive tone and state throughout its at times hard to bare 130 minute plus running time, Kent’s Tasmanian set colonial tale of young Irish convict Clare traversing the rugged and body filled wilderness of the early 1800’s with her Aboriginal guide Billy as she seeks vengeance against the British soldiers who robbed her of everything, is easily one of the years toughest watches, that also rewards those that stick by it with a story that will not soon be forgotten.
One of the most fully-formed and important Australian films made in the last decade, one that refuses to shy away from our shameful past and treatment of the Indigenous people and those unfortunate convicts that were shipped to the then newly forming land, Nightingale is a female orientated revenge film unlike any other and one that further establishes Kent’s regard as one of the country’s leading directional voices, while unearthing two spectacular talents in the form of Aisling Franciosi as Clare and Baykali Ganambarr as Billy.
Under the guiding hand of Kent, Franciosi and Ganambarr shine in what are unquestionably difficult roles, brilliantly inhabiting two lost souls that share a broken bond and quest and throughout the films gruelling progression, that ensures we see very little light or levity throughout, the two young actors are awards worthy in what is sure to be two career defining performances.
Both characters are wonderfully written by Kent, who went to great lengths to ensure that Nightingale’s history and even near-forgotten about languages were utilised correctly in her tale and by allowing audiences ample time with these creations, Nightingale’s moments of grief, despair and humanity are made even more powerful thanks to our growing affiliation for Clare and Billy and their justifiable causes.
Coinciding with these two standout performances and Kent’s immaculate direction are two devilishly well-done supporting turns by the usually clean-cut Sam Claflin and Australia’s favourite supporting actor Damon Herriman as British soldiers Hawkins and Ruse, who are beyond detestable as the two actors embody two irredeemably evil men in ways that make sure we as an audience can barely stand the sight of them as they look to escape the atrocities they have committed in the seemingly un-governed landscape of the early Australian land.
Final Say –
It can’t be stated more clearly that The Nightingale is not for everyone, a film that many rightfully may not be able to endure but for those that stick by it right through to the heart-wrenching end, Kent’s film becomes not only one of the most quintessential Australian films made, but one of the most deeply moving revenge tales of the modern era.
See more from The Movie Guys on their website
DETAILS