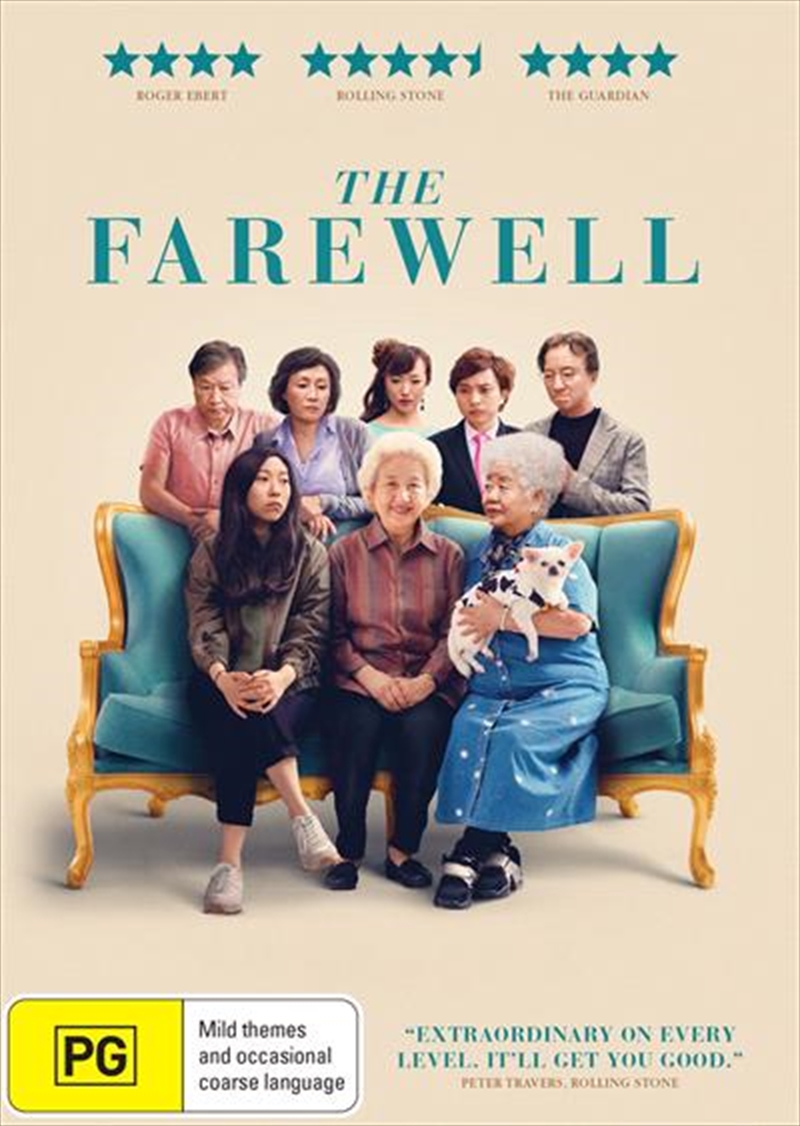 Based on an Actual Lie

In this funny, uplifting tale based on an actual lie, Chinese-born, U.S.-raised Billi (Awkwafina) reluctantly returns to Changchun to find that, although the whole family knows their beloved matriarch, Nai-Nai, has been given mere weeks to live, everyone has decided not to tell Nai Nai herself. To assure her happiness, they gather under the joyful guise of an expedited wedding, uniting family members scattered among new homes abroad. As Billi navigates a minefield of family expectations and proprieties, she finds theres a lot to celebrate: a chance to rediscover the country she left as a child, her grandmothers wondrous spirit, and the ties that keep on binding even when so much goes unspoken.

Review of The Farewell by Peter Walkden

Billi (Awkwafina) is a Chinese woman living in America. While failing to pay her rent and being turned down for a Fellowship, Billi finds out that her Grandma is dying of lung cancer. Billi also discovers that Grandma (Nai Nai) is unaware that she is dying. Her family have made the decision to keep Nai Nai in the dark in regards to her health and sickness. Now Billi’s family will travel to China to see their Grandma for one last time, but Billi is told by her family members never to reveal the truth. Billi is to pretend that everything is standard in regards to her Grandma’s health. As you would expect, Billi’s biggest challenge is to confront Nai Nai and act like nothing is wrong. Billi’s Grandma is also surrounded by many other family members who also know the truth.
The Farewell has many actors playing the family surrounding the Grandma. The performances for each character are rather strong and believable, in particular from Awkwafina who plays the character of Billi.
The film’s plot is hugely touching, even more so when the film claimed at the start that this movie is based on an “actual lie”. It didn’t take me long to get invested in this film, and for the whole duration I was hoping certain characters would make the right choices or that the Grandma would discover the truth about her sickness at some point. Once I started this film, I had to see it to the end.
While The Farewell personally showed me many emotions, I couldn’t help but think about my own family, past and present. When a film makes you feel and think like that, it’s an extremely positive experience. I will also confess to fans; I even teared up unexpectedly at one point too (that’s the power of actress Awkwafina- well done).
Overall, The Farewell is a touching story that was able to grab my heartstrings. With outstanding performances from all actors (especially Awkwafina), this film had me invested from the start. Not only that, this film was even able to get me thinking about my family members, past and present. When a movie can make you feel and think about family and feel emotions, it’s an extremely positive experience.
Peter has written this movie review for Sanity. See more from Peter here