You're In My Heart - With The Royal Philharmonic Orchestra - Deluxe Edition 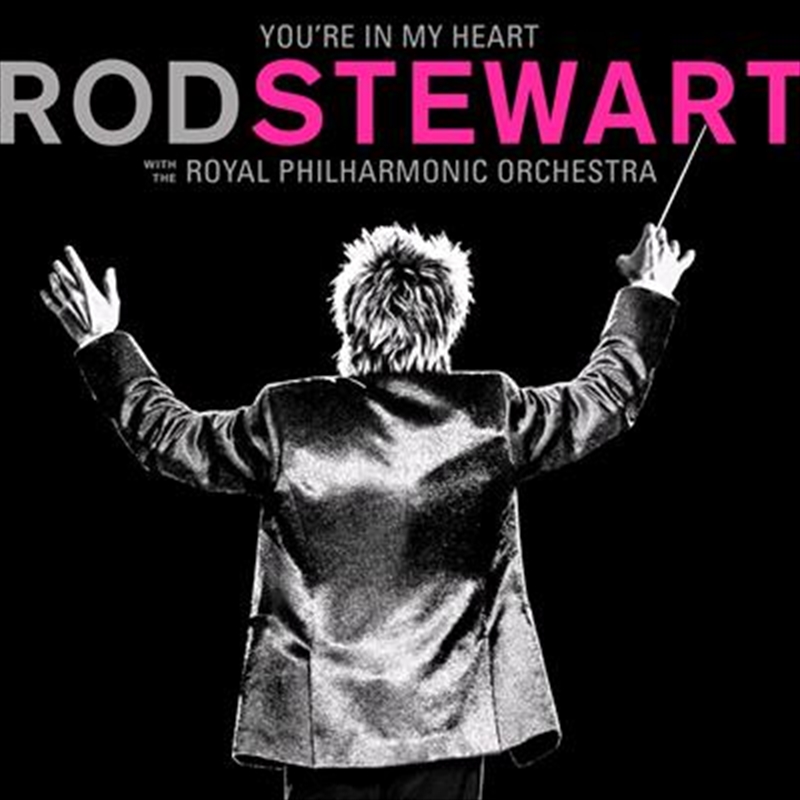 You're In My Heart - With The Royal Philharmonic Orchestra - Deluxe Edition

The legendary singer-songwriter is one of the best-selling music artists of all time, with more than 250 million records sold worldwide during a stellar career that includes nine #1 albums and 26 Top 10 singles in the U.K. Plus, 17 Top 10 albums and 16 Top 10 singles in the US. Rhino will honor the legendary singer-songwriter with a new album that lets fans hear Stewart’s biggest hits in a newly imagined way.

YOU’RE IN MY HEART: ROD STEWART WITH THE ROYAL PHILHARMONIC ORCHESTRA pairs classic vocal tracks from his most popular songs with new arrangements performed by The Royal Philharmonic Orchestra. The result is a timeless record that retains the power, soul and passion that have fueled Stewart’s legacy from the start. The album also features a new version of the hit song “It Takes Two” featuring pop- star Robbie Williams and a brand-new song “Stop Loving Her Today” by Rod Stewart.

The album features the full orchestral arrangements. Produced by Trevor Horn, YOU’RE IN MY HEART includes new orchestral versions of Stewart’s #1 U.K. hits: “Sailing,” “I Don’t Want To Talk About It” and “The First Cut Is The Deepest.”

The collection also features versions of “Maggie May” and “Reason To Believe” – songs that topped the charts in both the U.K. and the U.S. in 1971.

YOU’RE IN MY HEART is packed with Stewart’s best-known songs, including versions of the Top 10 U.K. hits: “Tonight’s The Night (Gonna Be Alright) (a #1 smash in the U.S.), “The Killing of Georgie (Part 1 and II),” “You’re In My Heart (The Final Acclaim),” “I Was Only Joking,” “What Am I Gonna Do (I’m So In Love With You),” “Every Beat Of My Heart,” “Downtown Train,” “Rhythm Of My Heart” and a cover of Tom Waits’ “Tom Traubert’s Blues (Waltzing Matilda).

Alongside Stewart’s major hits are fan favorites like: “Young Turks,” “Forever Young,” “If We Fall In Love Tonight,” a version of “Handbags And Gladrags” from his multi-platinum acoustic album, Unplugged…and Seated and “Stay With Me,” a Top 40 hit he recorded with the Faces in 1971. After a triumphant stadium tour this summer, the release of YOU'RE IN MY HEART coincides with the continuation of Stewart's biggest UK tour ever with live performances in November and December 2019.

In addition, he returns to Caesars Palace in Las Vegas, and a show September 2019 at The Hollywood Bowl with a landmark reunion set with his former bandmate Jeff Beck.

Title: You're In My Heart - With The Royal Philharmonic Orchestra - Deluxe Edition

5. Tonight’s The Night (Gonna Be Alright)

6. The Killing Of Georgie (Part I and II)

8. The First Cut Is The Deepest

9. You’re In My Heart (The Final Acclaim)

1. It Takes Two (with Robbie Williams)

5. Every Beat Of My Heart

8. Rhythm Of My Heart

9. Have I Told You Lately

11. If We Fall In Love Tonight