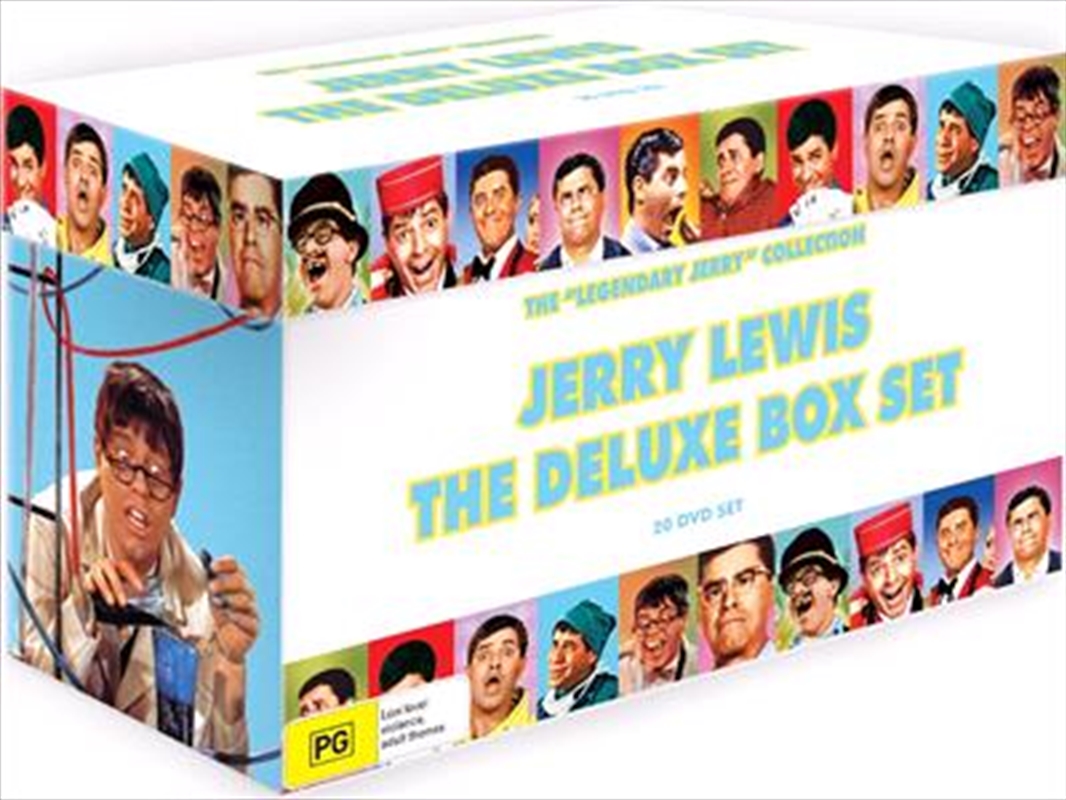 THE NUTTY PROFESSOR: Julius Kelp is a college professor with a problem. Clumsy, awkward, inarticulate and unattractive, Julius is a hopeless case when it comes to women--but he's desperate to impress beautiful student Stella (Stella Stevens). Fortunately, he does know something about chemistry and decides to concoct a potion that will turn him into a whole new man. In this classic comedy, Julius' suave alter ego, Buddy Love, must win Stella's affections before his short-lived potion runs out.

ROCK-A-BYE BABY: Clayton Poole is a TV repairman who still has feelings for his old high school girlfriend, Carla Naples (Marilyn Maxwell). Trouble is Carla is now a glamorous movie star and the wife of a Mexican bullfighter. When her husband is tragically killed and she needs to keep the baby a secret, the star turns to Clayton for help. He is thrilled at the prospect of acting as babysitter. But Carla neglects to tell him she actually had triplets.

WHO'S MINDING THE STORE?: Barbara (Jill St. John) is in love with Norman , the man who looks after her poodle. But she has a secret: She's the daughter of a wealthy society couple and worth more than Norman will ever make. When her mother, Phoebe (Agnes Moorehead), finds out about Barbara's relationship, she sends Norman to work a series of increasingly humiliating jobs at the family's department store. Norman tries to please his cruel boss, Mr Quimby (Ray Walston) and win Barbara's hand in marriage.

LIVING IT UP: After accidentally receiving a lethal dose of radiation near the Los Alamos nuclear test site, railroad attendant Homer Flagg has only weeks to live. Scrappy newspaper reporter Wally Cook (Janet Leigh) wants to bring the small-town boy to New York to live his final days in luxury while she reports on his bravery. Homer's doctor, Steve Harris, has learned his patient isn't about to die, but his attraction to the beautiful Wally causes him to keep that a secret.

MONEY FROM HOME: A gambler outwits gangsters with his country cousin, who poses as a British horse jockey however, budding romances complicate the situation.

PARDNERS: A New York playboy goes west with a prize bull and the foreman of his father's ranch.

SAILOR BEWARE: At a Navy recruitment centre, allergy-prone Melvin Jones and suave singer Al Crowthers , who has bum knees, fret about being accepted. But both men pass and are sent to a San Diego training base, where Melvin's phobias and allergies antagonize Chief Petty Officer Lardoski (Robert Strauss). Dragged into a kissing contest with local girls--which causes his allergies to flare up--Melvin is put on the spot to win a kiss from film star Corinne Calvet (as herself).

THAT'S MY BOY: A rah-rah alumnus pays someone to make his klutzy son a football star at his alma mater.

YOU'RE NEVER TOO YOUNG: When barber's assistant Wilbur unwittingly becomes involved in a heist, he tries to get away by train. He is unaware that gangster Noonan (Raymond Burr) has slipped a stolen diamond into his pocket. Unable to pay the fare, Wilbur dresses up as a young boy and sits with teacher Nancy (Diana Lynn). When one of Nancy's colleagues sees Wilbur, she concludes that Nancy is cheating on Bob , her fiance. Wilbur remains disguised to prove Nancy's innocence and evade Noonan.

THE BELLBOY: A mute bellboy working at the luxurious Fontainebleau Hotel in Miami Beach constantly causes problems with his clumsy mistakes.
Moroccan spies and an Army psychiatrist (Phyllis Kirk) try to figure out a goofy GI with a photographic memory.

DON'T GIVE UP THE SHIP: The Navy expects a veteran to pay for the ship he commanded, as they have no record of its return.

GEISHA BOY: A bumbling magician stumbles from one chaotic situation to the next when he joins a USO tour in the Far East.

THE ERRAND BOY: The miserly head (Brian Donlevy) of a Hollywood studio hires a goofy paperhanger to spy on his employees.

THE PATSY: Eccentric bellhop Stanley Belt is recruited unexpectedly by the comedy team of a recently deceased entertainer. Stanley struggles to become a song-and-dance man as the team--including producer Caryl (Everett Sloane), writer Chic (Phil Harris) and assistant Ellen (Ina Balin)--grooms him to become a star. But as the date of a high-stakes appearance on the Ed Sullivan Show grows near, they begin to fear that the only astonishing thing about Stanley is his utter lack of talent.

THE DISORDERLY ORDERLY: A hospital orderly creates havoc by igniting a patient's beard and stealing an ambulance to pursue his girlfriend.

THE FAMILY JEWELS: An orphan heiress (Donna Butterworth) goes with her chauffeur to pick a guardian from six uncles, each played by Jerry Lewis.

THE DELICATE DELINQUENT: A New York patrolman (Darren McGavin) sees police-academy potential in a klutz mistaken for a street-gang hoodlum.

THE CADDY: A golfer and a caddy land in show business after getting kicked out of professional golf.

This 20-Dvd Box Set Is A Delight For Anyone Afflicted With A Susceptibility To The Fractured Antics Of Jerry Lewis.