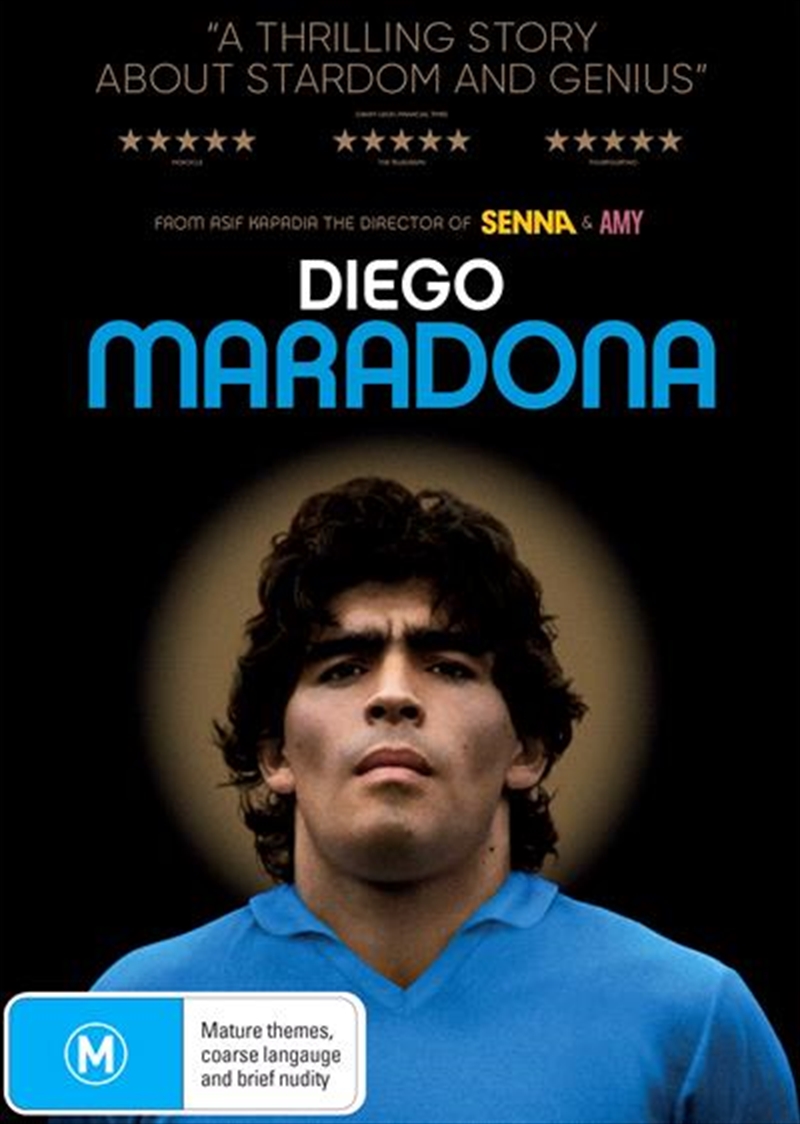 Having never won a major tournament, ailing football giant SSC Napoli had criminally underachieved. Their fanatical support was unequalled in both passion and size. None was more feared. But how they ached for successOn 5th July 1984, Diego Maradona arrived in Naples for a world-record fee and for seven years all hell broke loose. The worlds most celebrated football genius and the most dysfunctional city in Europe were a perfect match for each other. Maradona was blessed on the field but cursed off it; the charismatic Argentine, quickly led Naples to their first-ever title. It was the stuff of dreams. But there was a price Diego could do as he pleased whilst performing miracles on the pitch, but when the magic faded he became almost a prisoner of the city. The third film from the Academy Award-nominated, BAFTA-winning team behind Senna and Amy, the film will be constructed from over 500 hours of never-before-seen footage from Maradonas personal archive and in the style of Senna and Amy, will be a high-end and definitive feature documentary made with the full support of Maradona.

Review of Diego Maradona by Eddie @ The Movie Guys

Increasing his reputation as one of, it not the most accomplished biopic documentarian’s working today, Asif Kapadia once more illuminates and unpacks a world renowned figure in the form of Diego Armando Maradona in stunning fashion for this HBO backed documentary that is a must-see for fans of football and movie lovers from across the globe. As he did so expertly for the BAFTA winning Senna and the Academy Award winning Amy, Kapadia steers clear from talking heads and one on one interviews to instead utilise hours upon hours of footage made up of news stories, home videos and previously unseen captures of his subject, as he focusses on Maradona’s eventful career period in the Italian football league during the 80’s and early 90’s, that saw the once in a lifetime talent achieve the highs and lows of an industry that at one time saw him as a God amongst men. Kapadia’s style creates an immersive and gripping vibrancy for the viewer and his ability to be able to hone in on his subject and weed out any unnecessary facts or side-plots ensures that we are transported back to a time and place in Maradona’s life that needs to be seen to be believed. This documentary isn’t interested in examining every minute detail of Maradona’s upbringing or rise up the ranks to become one of the most well-known sporting figures ever seen but it’s helpful for Kapadia’s investigation into the defining time period of Maradona’s career, as we are given a profile of a man who came from nothing to achieve both greatness and great sorrow, a man battling with two separate characters, the Diego he started out as and the Maradona he slowly morphed more and more into as his life took many twists and turns. Maradona makes for a fascinating subject matter, an at times relatable and likable figure that also can be detestable and unsavoury in equal measure, what we are given is a figure placed in situations that are almost entirely unfathomable as nations and millions upon millions of everyday people placed their trust and adoration on a man that at the end of the day just wanted to kick a soccer ball around as a means to escape a previously impoverished life. The footage Kapadia has managed to get his hands on and the way in which he and editor Chris King collate it is some of the most expertly produced material you’re likely to see and it helps create a quintessential examination of a human being that was never going to be able to remain completely sane and untouched by the otherworldly like treatment he received as one of the greatest sportsman ever to have lived. Final Say – Painting a fascinating picture of a figure that remains larger than life, Diego Maradona is a moving and powerful documentary that acts as a quintessential examination of the rise and fall of a man that became a God too many. See more from The Movie Guys on their website
TRAILER
DETAILS