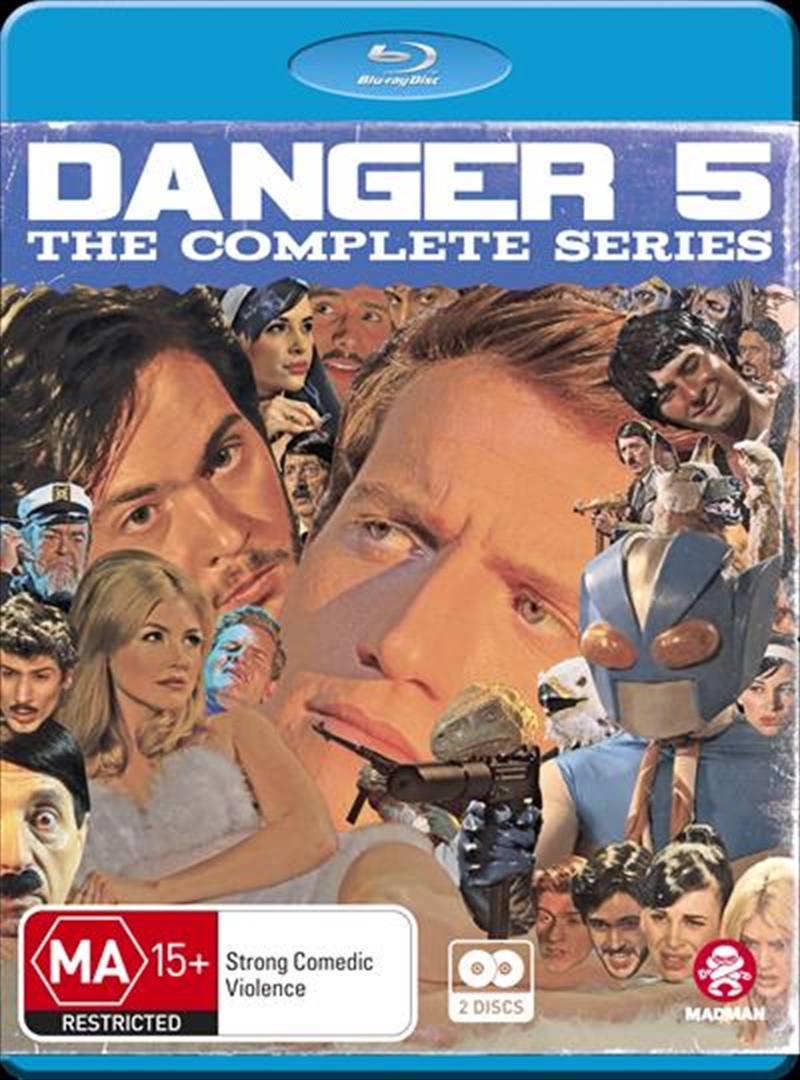 Series 1: Set in a bizarre, 1960s inspired version of World War II, action comedy series DANGER 5 follows a team of five spies on a mission to kill Adolf Hitler. Danger 5 is the finest group of special operatives the Allies have to offer; Jackson from the USA, Tucker from Australia, Ilsa from Russia, Claire from Britain and Pierre from Europe. In each episode Danger 5 unravels another of Hitlers diabolical schemes as they travel across a myriad of exotic locations. The action and offbeat humour is relentless as Danger 5 mounts a series of thrilling missions which include discovering Josef Mengeles perverted Antarctic death circus, busting down Erwin Rommels golden murder casino and posing as exotic dancers in an attempt to take out Hitler at his own birthday party.
Series 2: Allied super-team Danger 5 reunite to stop Hitlers ultimate quest for world domination in a 1980s excess-soaked universe of neon, ninjas, discos, dinosaurs, pizza and prom-queens! After winning the war for the Allies in Series 1, Danger 5 have since disbanded: Australian Tucker and British Claire have given up the spy game and are newly married; American Jackson is a jaded big city cop still hung up on Ilsa, European Pierre is an international party mogul; and Russian Ilsa is an entertainer with mysterious motives. When Colonel Chestbridge, their wartime leader, is brutally murdered in a London shopping mall, and attempts are made on each of their lives, Danger 5 re-unite to mix up a fresh cocktail of revenge, intrigue and bullets. On the hunt for the Colonels killer, Danger 5 travel to Buenos Aires where they make a shocking discovery: Adolf Hitler survived their last battle and has new plans to become immortal and take over the universe! In a bid to protect the world and save Christmas, Danger 5 must go undercover as high school students, become fugitives of the law, battle gun-wielding dinosaurs, run from Nazi zombies, save the Pope, and even go back in time, all the while contending with an unwanted travel companion: Holly, a clueless, annoying American high school senior, who has unwittingly found herself at the centre of Hitlers devious new plan. DANGER 5 Series 2 is set in a bizarre, post war landscape with 1980s cinematic aesthetics defined by period visual effects, matte paintings, miniatures, Schwarzenegger grade gunplay, Jim Henson style puppetry, John Carpenter inspired prosthetics, slasher gore, Christmas trees, and copious synth, all meshed together by an outrageous and surreal style of humour.
DETAILS