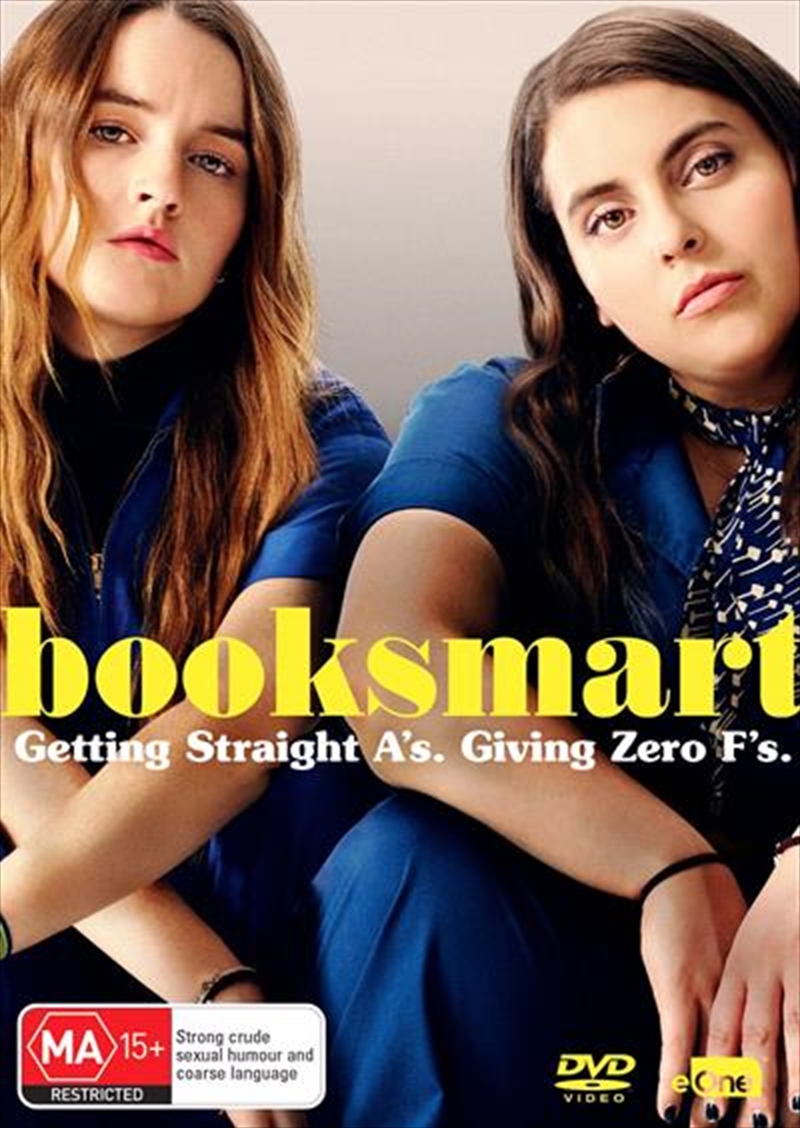 On the eve of their graduation, two overachieving high school seniors realize that they should have worked less and played more. Determined not to fall short of their peers, the girls try to cram four years of fun into one night.

Review of Booksmart by Eddie @ The Movie Guys

Tackling the high school comedy in a way that’s usually reserved for the boys of the world like Superbad, actress Olivia Wilde has excitedly and lovingly crafted her ode to growing up and school based shenanigans with the year’s most likable and fresh comedy Booksmart.
Showcasing that the girls can in fact be just as crazy, crass and enjoyable as the boys, Booksmart is like a breath of fresh air for the female-centric comedy, one that while struggling unfairly to make a massive splash at the box office this year (meaning it was sadly hard to track down in the cinema here in Australia) will likely be a cult favourite for years yet to come thanks to Wilde’s energetic direction and the chemistry of its two leads Kaitlyn Dever and Beanie Feldstein.
Naturally charismatic and gifted performers, Dever’s straight edged Amy and Feldstein’s academic driven Molly make for one of the year’s best pair-ups and bring a verve and enthusiasm to Booksmart that is undeniably impressive and as the two pent-up work focussed best friends finally let loose on the night before their high school graduation, Booksmart takes us on an over the top but also relatable trip to the final days of care free living as adult lives begin to become the aim of the game.
Similar to such films as the aforementioned Superbad and classic last day of school based romp Dazed and Confused, Booksmart sets its story up over literally the last days in our protagonists high school lives but thanks to the work of Emily Halpern, Sarah Haskins, Susanna Fogel and Katie Silberman perfectly in-tune script that mixes belly laughs with genuinely touching moments of humanity and heart, each one of the characters that come in and play a part of Amy and Molly’s wild night feel lived in and full of life and spark.
There’s no question that this is the Dever and Feldstein show but Booksmart’s winning ensemble that includes bit parts from recognisable faces such as Lisa Kudrow, Will Forte and Jason Sudeikis and great career building turns from the likes of Skyler Gisondo, Diana Silvers and Billie Lourd ensures that Wilde’s film is filled to the brim with talent and enthusiasm that can only come from a film that that quite clearly provided the environment for creativity and spark to be formed around the basis for what could’ve been “just another” teen based comedy touching on themes that have been explored ad nauseam since the dawn of cinema.
Thankfully nothing in Booksmart feels copied or stale and while it’s over the top central premise and happenings may not always ring true, Wilde and her team have managed the impossible in today’s climate and managed to create something that feels, new and unexplored and in the modern age of increased female-centric features, Booksmart stands out from the crowd as a natural and well deservingly praised outing that just so happens to be side splittingly funny on more than a few occasions.
Final Say –
Joyously bought to life by Wilde and her lead duo of Dever and Feldstein, Booksmart is a wickedly fun night out on the town and one of the best recent examples of a female led comedy that puts many of its more phony counterparts to shame.
See more from The Movie Guys on their website
TRAILER
DETAILS