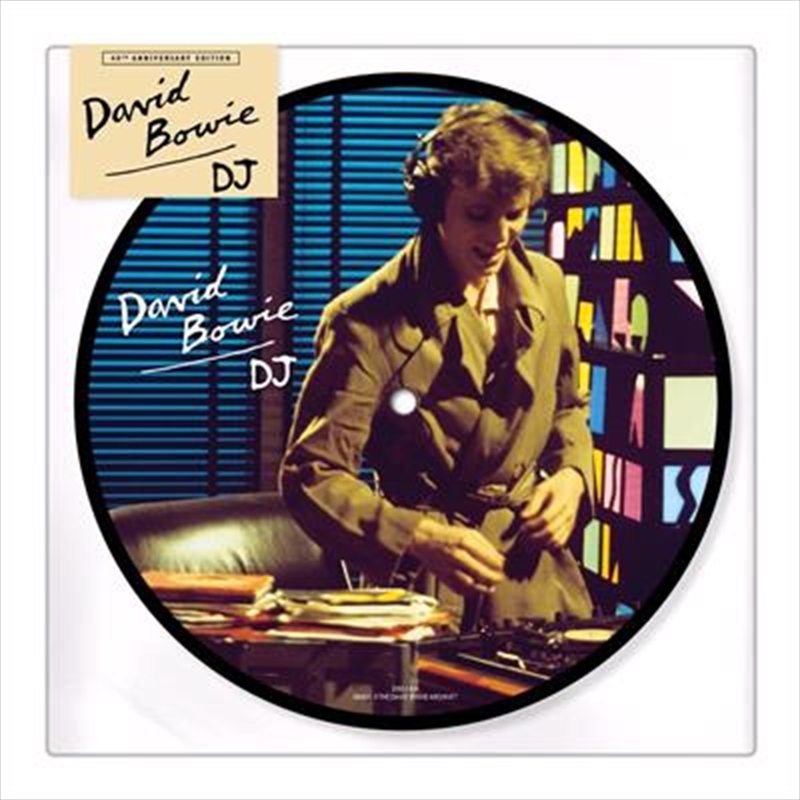 The 40th anniversary of David Bowie’s D.J. single will be marked by the next in Parlophone’s vinyl picture disc single series on 28th June, 2019.

Originally released on 29th June 1979, D.J. was the second and final single from Lodger in the UK and the follow up to Boys Keep Swinging. The Netherlands and Turkey would get Yassassin and the U.S. Look Back In Anger.

Echoing the method utilised for Robert Fripp’s improvisational guitar work on "Heroes", Bowie, Eno and Visconti assembled the guitar solo for D.J. from various ‘deaf takes’ by Adrian Belew, wherein he played against backing tracks he hadn’t heard previously and was further disoriented by being given no clue of chord structure or key before he soloed. The same method was used for Boys Keep Swinging and Red Sails, giving all three ‘solos’ their improvised feel.

The single release was accompanied by another delightfully mad David Mallet-directed video featuring Bowie as nonchalant DJ in a radio station studio, gradually destroying the equipment and the room around him. These scenes are interspersed with footage of Bowie rubbing shoulders and getting friendly with some of the wonderful people of Earls Court in London, as he strolls through the evening in a long coat being accosted by various strangers. The whole thing is topped off with our man as gas-masked art terrorist, spray-painting the DJ logo.

The A side of this D.J. picture disc features a previously unreleased single edit of the track from the Lodger (2017 Tony Visconti Mix) included in the A New Career In A New Town box set.

The previously unreleased version of Boys Keep Swinging recorded especially for The Kenny Everett Video Show features on the AA side. This take was recorded by Tony Visconti in Soho in London on the 9th April 1979 and features Sean Mayes on keyboards, Tony Visconti on bass, Simon House on violin, Andy Duncan on drums, Brian Robertson (of Thin Lizzy) on guitar and Ricky Hitchcock on guitar. The Kenny Everett Video Show was filmed on the following day and broadcast on 23rd April, 1979.