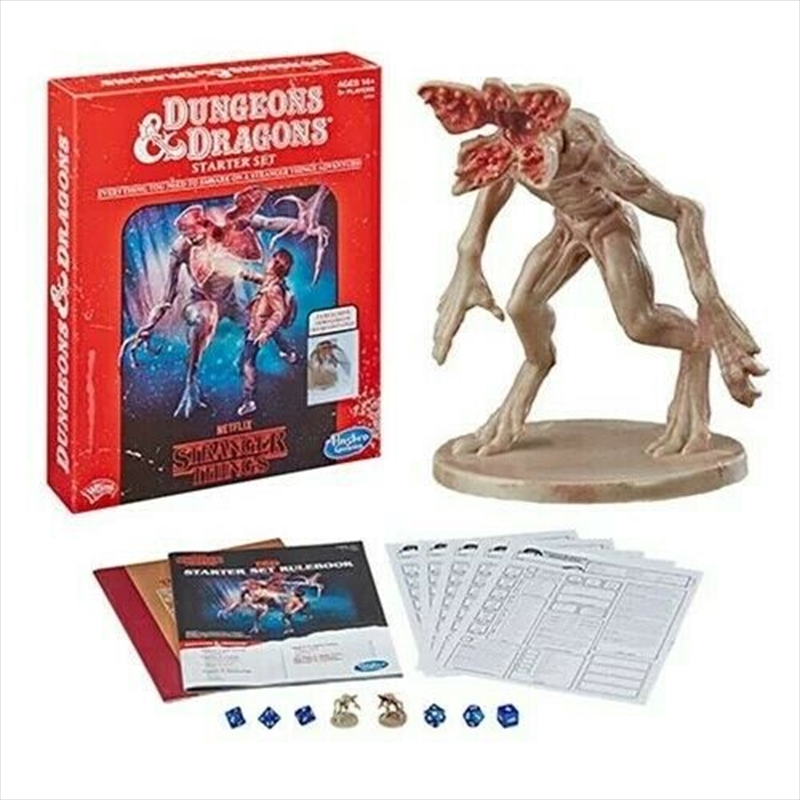 The Stranger Things Dungeons & Dragons Starter Set contains everything players need to embark on a Stranger Things adventure including the essential rules of the roleplaying game. It's a great way for new as well as seasoned Dungeon & Dragons players to experience the D&D adventure Stranger Things character Mike Wheeler has created for his friends. Pick your character -- will you be Will the Wise or Dustin the Dwarf? Get your fireballs ready as you investigate the mysterious castle and battle the ferocious Demogorgon. Prepare for just about anything, because the game just got stranger.

STRANGER THINGS THEMED OF DUNGEONS & DRAGONS: Embark on an exciting Dungeon & Dragons adventure, Hunt For The Thessalhydra, "created" by the character Mike from the Netflix Original Series, Stranger Things
GREAT GAME FOR NEW DUNGEON & DRAGONS PLAYERS: Whether players are new to D&D, or looking for a new adventure, this Stranger Things themed roleplaying game includes everything a group needs to play
DETAILED RULES, ADVENTURE BOOK AND GAME DICE: The exciting Adventure Book and colorful Rulebook contain tons of information on how to play the game, strategy, and tips for players to advance a character beyond the fifth level, plus 6 polyhedral dice so you're ready to play
STRANGER THINGS CHARACTER SHEETS: Play as a favorite Stranger Things character
INCLUDES 2 DEMOGORGON FIGURES: The game includes 2 Demogorgon figures, one that players can paint and customize

Type: Board Game: Dungeons And Dragons