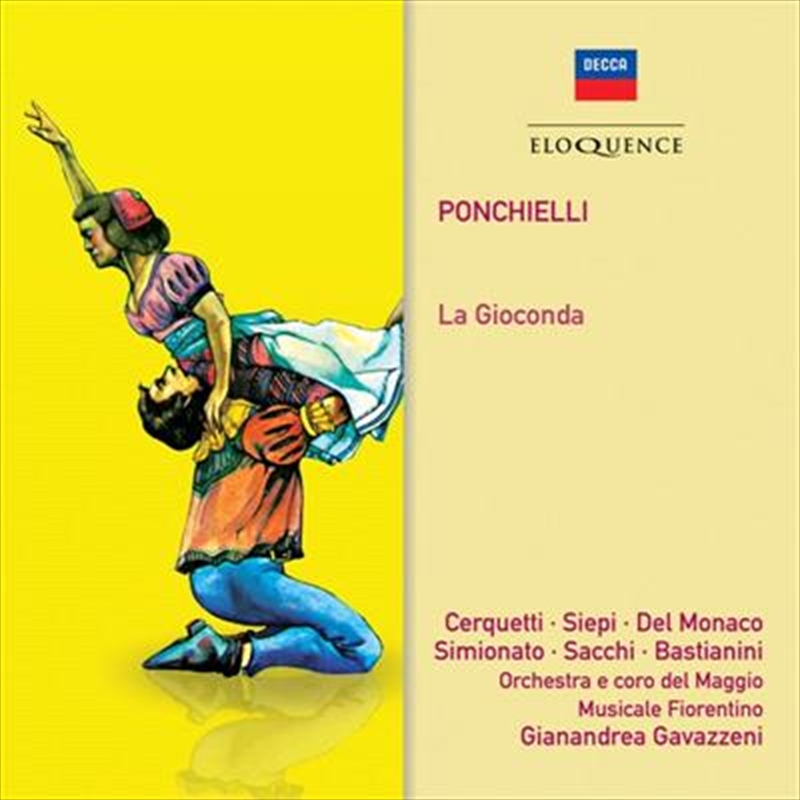 The first stereo recording of Ponchielli's most famous opera, with a towering performance of the title role captured in classic Decca sound.  There is more to La Gioconda than the 'Dance of the Hours', more even than the hit 'Suicidio' aria of the ill-fated and ironically-titled Venetian ballad-singer who holds the stage. There are scenes of carnival, blackest treachery, rapturous passion and unexpected compassion. In short, it's a verismo feast day, but no less a field day for enterprising audio engineers, with its constant physical action, its sopranos shouting imprecations at one another from the deck of Enzo's yacht, and its big, multi-voiced first- and third-act finales.

Singing La Gioconda, the young Anita Cerquetti drew inevitable comparisons with La Divina herself, Maria Callas, but reviewers at the time and listeners ever since have been surprised to find that Cerquetti is by no means overshadowed by the comparison. As recorded during the summer of 1957, her voice may be smaller, less in sheer size than in range of characterisation, but she proved herself a more than worthy replacement for Callas when she sang Norma at short notice in Rome six months later, and the Decca engineers capture her at the peak of her all-too meteoric career: vocal infirmity enforced her retirement from the stage in 1961 at the age of just 30.

Cerquetti is supported here by a distinguished verismo cast under the experienced baton of Gianandrea Gavazzeni. Particular praise has always been directed at Giulietta Simionato singing the role of Laura, La Gioconda's rival, while Mario del Monaco and Ettore Bastianini sing in the forthright, uninhibited style demanded both by Boito's libretto and Ponchielli's music.

This issue of La Gioconda is complemented by the Eloquence reissue of Cerquetti's stunning Decca recital (482 6801), which features a tantalising sample of her Tosca alongside earlier Italian repertoire by Spontini, Bellini and Verdi.

'Cerquetti sustains this exacting role to perfection. A beautiful voice, well managed, always in tune and with a dramatic edge to it that yet is not hard, promises well for the future' - The Musical Times, May 1958